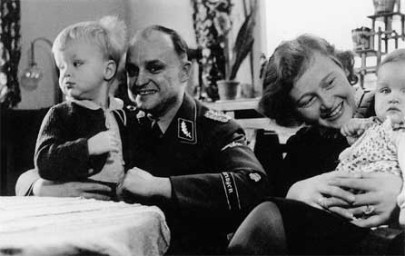 After the trial received worldwide media attention, survivor accounts of her actions resulted in other authors describing her abuse of prisoners as sadistic, and the image of her as “the concentration camp murderess” was current in post-war German society. She was accused of taking souvenirs from the skin of murdered inmates with distinctive tattoos. She was known as “The Witch of Buchenwald” by the inmates because of her alleged cruelty and lasciviousness toward prisoners. She is also called in  “The Beast of Buchenwald”, “Queen of Buchenwald”, “Red Witch of Buchenwald”, “Butcher Widow”and, more commonly, “The Bitch of Buchenwald”. 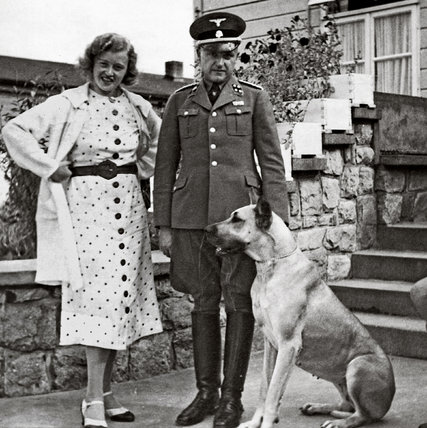 In 1936 she began working as a guard and secretary at the Sachsenhausen concentration camp near Berlin, which her fiancé commanded, and was married the same year. In 1937 she came to Buchenwald when her husband was made Commandant.

In 1940, she built an indoor sports arena, which cost over 250,000 reichsmarks (approximately $62,500), most of which had been seized from the inmates. In 1941 Karl Otto Koch was transferred to Lublin, where he helped establish the Majdanek concemtration camp and extermination camp. Ilse Koch remained at Buchenwald until 24 August 1943, when she and her husband were arrested on the orders of Josias von Waldeck-Pyrmont (see von Waldeck-Pyrmont), SS and Police Leader for Weimar, who had supervisory authority over Buchenwald. The charges against the Kochs comprised private enrichment, embezzlment, and the murder of prisoners to prevent them giving testimony.

Ilse Koch was imprisoned until 1944 when she was acquitted for lack of evidence, but her husband was found guilty and sentenced to death by an SS Court in Munich of jurist Roland Freisler

and was executed by shooting in Buchenwald in April 1945. She went to live with her surviving family in the town of Ludwigsburg, where she was arrested by U.S. authorities on 30 June 1945.

Koch and 30 other accused were arraigned before the American military court at Dachau. Koch announced in the courtroom that she was pregnant. She was indeed eight months pregnant. At least four separate witnesses for the prosecution testified that they had seen Koch choose tattooed prisoners, who were then killed, or had seen or been involved in the process of making human-skin lampshades from tattooed skin. However, this charge was dropped by the prosecution when they could not prove lampshades or any other items were actually made from human skin. On 19 August 1947, she was sentenced to life imprisonment for “violation of the laws and customs of war”. Karl and Ilse Koch had two sons, one of whom committed suicide after the war. Another son, Uwe, conceived in her prison cell at Dachau by an unknown father, was born in the Aichach prison near Dachau where Koch was sent to serve her life sentence and was immediately taken from her. At the age of 19, Uwe Kohler learned that Koch was his mother and began visiting her regularly at Aichach.

Koch committed suicide by hanging herself at Aichach women’s prison on 1 September 1967; she was 60 years old. On one of his scheduled visits, her son was stunned to learn that she had killed herself the night before. Koch’s body is buried in an unmarked and untended grave in the cemetery at Aichach.

The life in occupied Netherlands

800.000 Austrians were drafted into the German army after the Annexation in 1938.