The Georgian Uprising on Texel (Dutch: Opstand der Georgiërs) (5 April 1945 – 20 May 1945) was an Insurrection by the 882nd Infantry Battalion Königin Tamara, Queen Tamar of the Georgeon Legion

of the German Army, German Werhrmacht) stationed on the German occupied Dutch island of Texel. 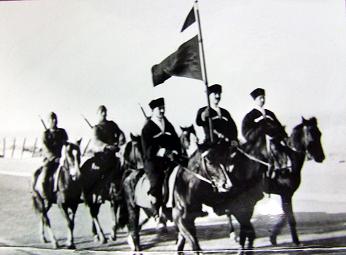 The battalion was made up of 800 Georgians and 400 Germans, with mainly German officers. It was one of the last battles on the European theatre.The heavily fortified island

was part of the German Atlantic Wall system of defense. However, after the Allied landings in Normandy it was relegated to relative insignificance. The men of the rebellious battalion were Red Army soldiers from the Georgian Soviet Socialist Republic captured on the Eastern front. They had been given a choice: the captured soldiers could choose either to remain in the prisoner of war camps, which would have meant abuse, starvation, and very possible death, or to serve the Germans and be allowed a degree of freedom. The battalion was formed of men who chose the latter option. The battalion had been formed at Kruszyna near Radom in occupied Poland in June 1943 and was used initially to fight partisans. On 24 August 1943 it was ordered to the West to relieve troops of the Indische Friewilligen-Legion Regiment 950. “Tiger Legion”

The battalion under command of Leutnant Shalva Loladze “Schalwa”

arrived at Zandvoort in the Netherlands on 30 August. From September 1943 to early February 1945 it was stationed at Zandvoort as part of the “Unterabschnitt Zandvoort”. On 6 February 1945 the battalion was posted to Subsection Texel. Preparations then started in late March 1945 for the transfer of several companies of the Georgian battalion to the Dutch mainland to oppose Allied advances, triggering the rebellion.

Shortly after midnight on the night of 5–6 April 1945, the Georgians rose up and gained control of nearly the entire island. Approximately four hundred German soldiers were killed in the initial uprising, almost all while sleeping in the quarters they shared with Georgians, who used knives and bayonets. Others were shot and killed while standing guard or walking the roads of the island in groups or individually that night and the following day. Members of the Dutch resistance participated and assisted the Georgians, however, the rebellion hinged on an expected Allied landing—which did not occur.  The Georgians

further failed to secure the naval batteries on the southern and northern coasts of the island; the crews of these artillery installations were the only Germans still alive on the island.

A counterattack was ordered and the intact artillery batteries on the island began firing at sites where rebels were suspected to be. Approximately 2.000 riflemen of the 163rd Marine-Schützenregiment were deployed from the Dutch mainland. Over the next five weeks they re-took the island; fighting was particularly heavy at Eierland and around the lighthouse

. The German troops then combed the length of the island for any remaining Georgian soldiers, while the Dutch inhabitants sought to hide them. 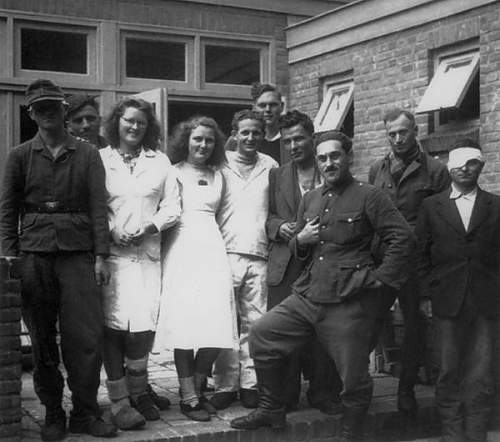 The German commander of the 882nd battalion, Major Klaus Breitner,

stated long after the war that the uprising was “treachery, nothing else”; the captured mutineers were ordered to dig their own graves, remove their German uniforms, and be executed. Leutnant Shalva Loladze “Schalwa” was killed in fighting on April 25, 1945. He is buried together with his comrades-in-arms at the Georgian War Cemetery of Texel which has been given Loladze’s name.

During the rebellion, 565 Georgians, at least 812 Germans, and 120 residents of Texel became casualties. The destruction was enormous; dozens of farms went up in flames, with damage later estimated at ten million guilders (US$3.77 million).

The bloodshed lasted beyond the German capitulation in the Netherlands and Denmark on 5 May 1945 and even beyond Germany’s general surrender on 8 May 1945. The fighting continued until Canadian troops arrived 20 May 1945 to enforce the German surrender, and disarmed the remaining German troops.

The Georgians lie buried in a ceremonial cemetery at the Hogeberg near Oudeschild.

The 228 Georgians who survived by hiding from the German troops in coastal minefields, or who were concealed by Texel farmers, were turned over to Soviet authorities. After arrival at a collection camp in the Soviet Union, 26 Georgians were singled out and banished together with their families and nearly all others disappeared into Stalin’s Gulags. Those still alive in the mid-1950s were rehabilitated and allowed to return home. Until 1991, the ambassador of the Soviet Union to the Netherlands visited the graves of the Georgians on 4 May every year, and, at least during the latter visits, called the Georgians “Heroes of the Soviet Union”. The German dead were initially buried in a part of the general cemetery in Den Burg. In 1949 they found their final resting place at Ysselstein military cemetery,

who is now 88 years old and lives in Kaspi, a village 40 km west of Tbilisi, and Eugeny Artemidze

Canadian troops landed unopposed on Texel on 20 May 1945, effectively liberating the island. Over a two-day period the Canadians disarmed 1,535 Germans. Soviet SMERSH forces arrived on Texel and took charge of 228 Georgians still alive. A Canadian report prepared for the commander of the SMERSH contingent numbered 470 Georgian and 2,347 German casualties on Texel. In 1949, the German War Graves Commission disinterred on Texel 812 bodies (including the 400+ killed in their sleep by the Georgians in their shared quarters) for reburial at Ysselsteyn German war cemetery. The numbers given by the Texel district list “565 Georgians, 120 Texel islanders and approximately 800 Germans killed”; followed by “other sources … speak of more than 2,000 Germans killed.” The “other sources” comment in all probability refers to the Canadian report to SMERSH that lumped together under “casualties” the 1,535 disarmed Germans with their 812 dead

The last casualty was a Dutch supporter of the uprising, the local baker Theo Smit,

who was accidentally killed by a Georgian.

The kidnap of the German General Heinrich Kreipe.

Ilya Ehrenburg, the leading Soviet propagandist who agitated for genocide against Germans.

SS Standartenführer Karl Jäger, Einsatzkommando leader who perpetrated acts of genocide during the Holocaust.
Persecution of homosexuals in Nazi Germany and the Holocaust.