The Beer Hall Putsch, also known as the Munich Putsch, and, in German, as the Hitlerputsch or Hitler-Ludendorff-Putsch, was a failed coup attempt by the Nazi Party leader Adolf Hitler — along with Generalquartiermeister Erich Ludendorff and other Kampfbund leaders — to seize power in Munich, Bavaria, during 8–9 November 1923.

By midmorning on 9 November, Erich Ludendorff

cried out, “Wir marschieren!” (We will march!) and Ernst Röhm

force together with Hitler’s marched out – but with no specific plan of where to go.  Hitler, surrounded by his associates Herman Goering, Alfred Rosenberg, Rudolf Hess, Ernst Hanfstaengl, Ulrich Graf

. On the spur of the moment, Ludendorff led them to the Bavarian Defence Ministry. However, at the Odeonsplatz  in front of the Feldherrenhalle, they met a force of 130 soldiers blocking the way under the command of State Police Senior Lieutenant Baron Michael von Godin. The two groups exchanged fire, killing four state police officers and 16 Nazis. This was the origin of the Blutfahne (blood-flag)

Hitler and Goering were both injured. A bullet killed Scheubner-Richter. Goering was shot in the groin but escaped, owing to he remained all his life morfine addicted. The rest of the Nazis scattered or were arrested.

After two days, Hitler was arrested and charged with treason. From Hitler’s perspective, there were three positive benefits from this attempt to seize power unlawfully. First, the putsch brought Hitler to the attention of the nation. His arrest was followed by a 24-day trial, which gave him a platform to publicize his nationalist sentiment to the nation. Hitler was found guilty of treason and sentenced to five years in Landsberg prison.

The second benefit to Hitler resulted in the production of his book Mein Kampf, which was dictated to his fellow prisoner, Rudolf Hess. On 20 December 1924, having served only nine months, Hitler was released. The final benefit that accrued to Hitler was the insight that the path to power was through legitimate means. Revolution and anarchy was not the answer to the pursuit of power. Accordingly, the most significant outcome of the putsch was a decision by Hitler to change NSDAP

tactics, which would demand an increasing reliance on the development and furthering of Nazi Propaganda.

The 16 fallen were regarded as the first “blood martyrs” of the NSDAP and on 9 November 1935, the dead were taken from their graves and to the Feldherrnhalle. The SA and SS carried them down to the Königplatz, where two Ehrentempel (Honour Temples) had been constructed. In each of the structures eight of the martyrs were interred in a sarcophagus bearing their name. The ruins still remain in 2015. 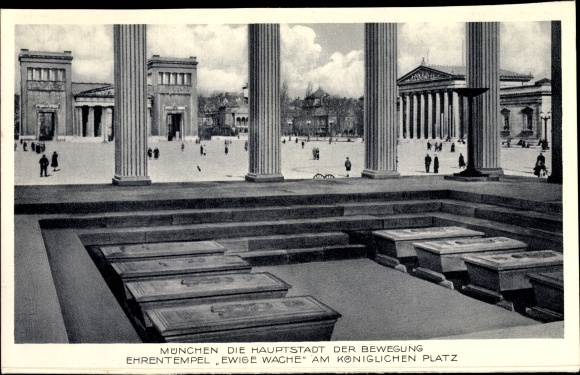