During World War II, Rüsselsheim, an industrial town that housed many key targets, including the Opel plant, was bombed several times by the Royal Air Force (RAF)

. The RAF followed a policy of “area bombing” of cities at night while the United States Army Air Forces (USAAF)

relied on “precision bombing” by day.

On the afternoon of August 24, 1944, an American B-24 bomber named Wham! Bam! Thank You Ma’am, commanded by 2nd Lieutenant Norman J. Rogers Jr,

here with Madeline Teremy in front of Memorial which contains photos of the B-24 crew. Her father was the pilot, 2nd Lt. Norman J. Rogers Jr They were shot down while taking part in an attack on Hanover and the crew parachuted down near Hutterup. One lookout alerted both the local fire brigade and the military detachment at the nearby airfield and patrols were dispatched to find the downed Americans. One of the nine airmen, Staff Sergeant Forrest W. Brininstool

, had serious flak injuries to his abdomen. After landing on the farm, he was given first aid by an elderly couple and in return, Brininstool gave them his silk parachute, a valuable item for peasants. Within a few hours, most of the crew

were captured by German personnel and taken into an interrogation room in the town hall in Grevebn. After that, most of the crew-members, including Rogers, were taken to an air base near the town where they slept for the night. Brininstool was taken to a medical clinic where he was operated on for shrapnel wounds then was moved to a hospital in Münster to undergo a second operation.

The next morning, Brininstool still remained behind in the hospital while the others were loaded onto a train for a trip south to the Dulag Luft in Oberursel, north of Frankfurt. At every stop along the way, after German civilians noticed the Americans on the train, crowds would form at the windows, shouting in anger at the “terror fliers” and shaking their fists, spitting on the windows.

On the night of August 25, the RAF sent 116 Avro Lancasters to Rüsselsheim in order to attack the Opel factory on a bombing mission, dropping 674 2,000-lb bombs and more than 400,000 incendiaries on the city, destroying the plant and damaging the railtracks, more by far than any previous air raid on Rüsselsheim in World War II. Towards the end of the bombing raid, a German air raid warden, Joseph Hartgens 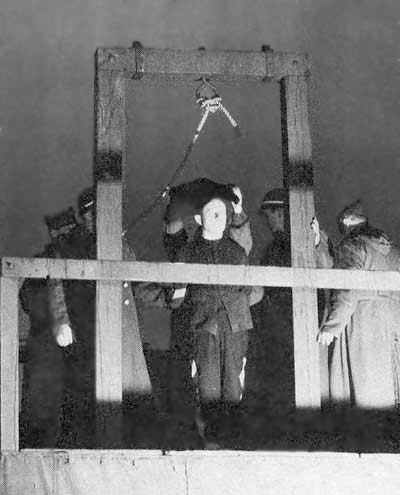 , mobilized residents in Russelsheim to put out the fires in their homes.

The prisoners were escorted by two German soldiers. As the Americans marched through Rüsselsheim, the townspeople, assuming the fliers were Canadians who had taken part in the previous night’s raid, quickly formed and immediately turned into an uncontrollable angry mob.

, shouted out, “There are the terror flyers. Tear them to pieces! Beat them to death! They have destroyed our houses!” One of the crew-members replied back in German, “It wasn’t us! We didn’t bomb Rüsselsheim!” Nevertheless, one woman threw a brick at the crew and that precipitated a riot during which the townspeople attacked the prisoners with rocks, hammers, sticks and shovels. Three Opel workers arrived with iron bars and starting beating the men to death to the cries of the crowd.

The mob was joined by air raid warden Josef Hartgen, who was armed with a pistol. The German soldiers who guarded the crew-members made no attempt to prevent the beatings. After the airmen collapsed from the beatings, Hartgen lined them up in the curb and shot six of the men, pilot Norman  Rogers, Tom Williams

, in their heads but ran out of ammunition, leaving two of the airmen, William M. Adams

, alive. The mob then put the airmen on a cart and took them to a cemetery. Those who moaned were further beaten.

After the war in Europe ended in 1945, the killings came to light when Rüsselsheim was under occupation by the U.S Army and the bodies were located on 28 June 1945. In the first war trials of Germany prior to the Nuremberg trials, eleven residents of Rüsselsheim, including Joseph Hartgen, were put on trial in late July 1945 in Darmstadt, a town devastated by a British night attack the previous September that had killed 8,500 residents and left 70,000 homeless.

The trial lasted six days, with eyewitness testimony to the killings by Joseph Hartgen; and accounts of the bludgeoning of the airmen.

On August 2, Joseph Hartgen, Johannes Siepel, Phillip Gutlich, Friedrich Wust, Johannes Opper, Margarete Witzler and Käthe Reinhardt were found guilty and sentenced to death. One person was acquitted by the Commission while the remainder of the defendants were given varying prison terms. The judge, however, later committed Witzler and Reinhardt to 30 years in prison when Jean Witzler, Margarete’s husband and Käthe Reinhardt’s brother-in-law, pointed out that the only offenses the two women committed against the pilots was screaming. On November 10, 1945, Hartgen and the four others were hanged at the prison in Bruchsalby the hangman John Chris Woods

Woods also hanged the Nuremberg condemned. A sixth, a German soldier, was convicted and executed in 1946.

Copyright photo’s After the Battle Magazine.

The survivors in January 1980. 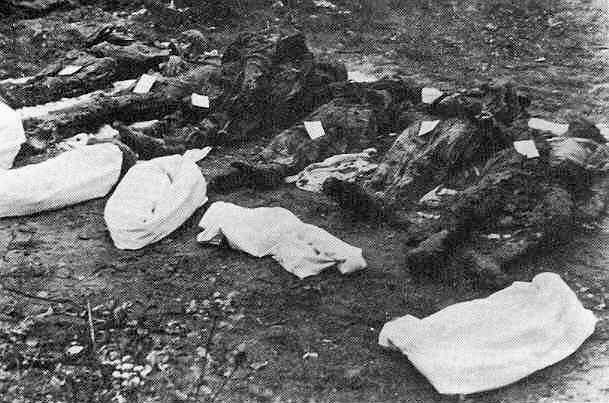