got the nickname “Ghost Division” in 1940 in the France campaign. They were given the nickname because they advanced so fast that they appeared were they weren’t expected, and even German high command didn’t always knew where they were.

Generalmajor Rommel, commander of the 7th Panzer Division, accepting the surrender of Major General Victor Fortune (center), commander of the 51st Highland .General Fortune spent the rest of the war as a prisoner of war. As senior British officer in captivity in Germany, he worked to improve the conditions of the men under his command. He suffered a stroke in 1944 but refused repatriation. He was finally liberated in April 1945 and made KBE

7th Panzer corps took part in the campaign in Poland, and was after that strengthened and became a full panzer division. Erwin Rommel was asked b y Hitler which command he wanted for the battle of France, and Rommel-having no tank experience choose a panzer division, and 15.february 1940 he was given command of the 7th Panzer Division which was part of the 15th Panzer Corps

Erwin Rommel lead his division from the front, often from the top of a tank, earning him great respect from his men. This also aloud him to make decisions much faster then commanders who stayed behind the frontline. His results and his relationship to Hitler made him immune to the critism from the High Command who sometimes ment he was to independent in his decisions. 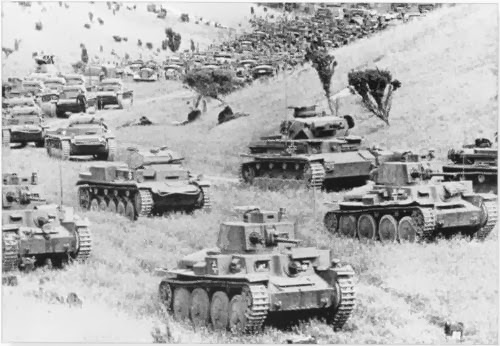 Timeline for Ghost Division in France:

10 May 1940 – Fall Gelb, the invasion of France, is launched. 7th Panzer advances through the Ardennes.

At the end of the campaign, the Germans suffered 156,000 casualties (27,074 killed) The Allied casualties figures for D-Day have generally been estimated at 10,000, including 2500 dead. Broken down by nationality, the usual D-Day casualty figures are approximately 2700 British, 946 Canadians, and 6603 Americans.

7.th Panzer Division since 10th May had captured:
The Admiral of French Navy (North) André Marguis

The 7th Panzer Division started Operation Barbarossa with 400 officers and 14,000 men. By January 1942, six months from the start of the offensive, the division had suffered 2,055 killed, 5,737 wounded, with 313 missing and another 1,089 sick with frostbite and louse bound diseases. Total casualties were 9,203.

From 1941 the Ghost Division 7th Panzer was mainly in action in Russia, being one of the forced that came closest to Moscow. In the end, they surrendered to British troops in Germany.

The Wormhoudt massacre, the mass murder of 80 British and French POWs by Waffen-SS soldiers from the 1st SS Division Leibstandarte SS Adolf Hitler

Adolf Hitler women friendly or not.
"Salon Kitty" was a high-class Berlin brothel used by the Nazi intelligence service.