SS-Standartenführer and adjudant of Martin Bormann.

was an adjutant to Party Chancellery (Parteikanzlei), Martin Bormann

during World War II. He joined the SS in 1933 and became a SS Sturmführer

on 01-04-1933 and Staff Führer with the SS Reichsführer, Heinrich Himmler.

born 18-02-1905, died 29-01-1987, was another official of the Nazi Party and assistant to Martin Bormann in the Office of the (Nazi) Party Chanccellery. Klopfer represented Bormann during the Wannsee Conference “Final Solution” for the Jews, on 20-01-1942 with Reinhard Heydrich,

Klopfer was the last surviving attendee of the Wannsee Conference. Although Zander received only minimal education he built up business interests in Italy, he was a party idealist. However he abandoned these to take up a full-time post as a Nazi Party worker. He became a SS Sturmbannführer

on 20-04-1943. He also joined the Schutzstaffel and achieved the rank of SS Standartenführer.

He was awarded with the Iron Cross 1st

and 2nd Class, the SA Sport Badge in Bronze

and the Reichssport Badge in Bronze

. As the war in Europe ended, he had accompanied Bormann to the Führerbunker in Berlin. He later fled the bunker during Battle of Berlin, on 29-04-1945, carrying two documents that included the will of Adolf Hitler, which Bormann had instructed him to carry to Grossadmiral, Karl Dönitz

, in Kiel. It was subsequently discovered that he had adopted the surname Friedrich Wilhelm Paustin and worked as a gardener in Tegernsee. He was captured under this name in the American occupation zone, near Hannover and as a consequence the copies of Hitler’s will and testament and the certificate of the marriage between Hitler and Eva Braun (see Eva Braun,

went into the hands of the American and British forces. Arnold Hans Weiss, 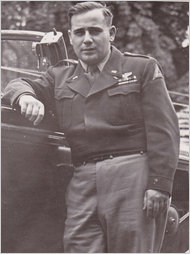 who fled to the United States from Nazi Germany as a 13-year-old and returned as an American soldier during World War II, becoming a principal in the investigation that led to the discovery of Hitler’s last will and political testament. He found Wilhelm Zander, Chief aide to Martin Bormann, the Nazi Party official who had controlled access to Hitler. Weiss pressured Mr. Zander’s family members, whom he found in the telephone book, and a girlfriend to gain the information that led to a Bavarian farmhouse in Tegernsee, where Zander was posing as a gardener. Hans Weiss died 07-12-2010 of pneumonia, in Rockville, Maryland, he was 86 and lived in Chevy Chase, Maryland.