the son of the royal Prussian chamberlain, landscape director and landowner, Günther von Woyrsch (1858–1923), master of the Schwanowitz and Pramsen estates, Groß- and Klein-Masselwitz and Pilsnitz, and his wife Gertrud Countess von Pfeil and Klein-Ellguth (1866–1956). His family owned an estate there. His family had originally come from Southern Bohemia, and had established themselves around 1500 in Troppau/Opava, Moravian Siwesia. The family were recognized minor nobility, one ancestor had even served as a Prussian royal chamberlain and his uncle was the Prussian General Field Marshal Remus von Woyrsch (1847–1920).

He had four siblings: Ines Marie Cäcilie Erna (married Countess von Roedern), Erika Margarethe (married von Voß, von Uechtritz and Steinkirch), Siegfried Remus Ewald, Lord of Pilsnitz near Breslau, and Horst Remus Günther, 1929 to 1935, and Lord of Lindenbusch (Liegnitz district), from 1936 master of Gut Groß-Zauche (Trebnitz district).
From early 1914 to 09-02-1919 Udo von Woyrsch served with the Germany Army as an Oberleutnant in the Great War. From 10-02-1919 to 23-08-1920 he was associated with an organization called the Grenzschutz, “border protection”. He was awarded a variety of medals during the war, including the Iron Cross, First Class

According to Richard Grunberger, a British historian, who died age 80, on 15-02-2005, von Woyrsch had been involved in de Freikorps

during the 1920s. Early on Woyrsch joined de NSDAP,

charged him with organizing the SS in the Nazi Gau Silesia. In 1933 von Woyrsch was elected to the Reichstag. He was the SS and Police Leader in Elbe, and in 1934 von Woyrsch participated in the Night of the Long Knives (see Ernst Julius Röhm) 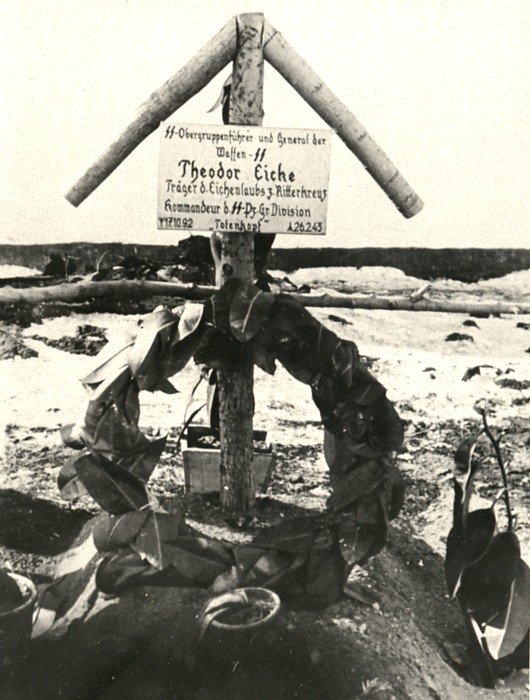 arrested a number of SA leaders, disarmed all SA headquarters’ guards and occupied the Breslau police headquarters. Von Woyrsch’s men murdered some of the SA officers as a result of an on-going private envy.” Udo von Woyrsch had a close friendship with Heinrich Himmler and Reinhard Heydrich,

and was on Himmler’s personal staff. On 01-01-1935 he was promoted to SS Obergruppenführer.

In September 1939 von Woyrsch commanded the Einsatzgruppen specifically charged with, and adept at, terrorizing and murdering the Jewish population of Poland. The brutality of this Einsatzgruppen in Kattowitz was such that outraged Wehrmacht officers interceded with the Gestapo

to have it stopped. Between 20-04-1940 and February 1944 von Woyrsch was the Higher SS and Police Leader in military district IV and district leader in Dresden. According to Richard Grunberger, von Woyrsch was part of Himmler’s entourage trailing about northern Germany in 1945. Von Woyrsch was a POW of the British from 1945 to 1948 when he was sentenced to 20 years but released in 1952. Tried again in 1957 for the “Röhm Putsch”

(7 March 1924 Vienna, Austria – 15 February 2005) was a British historian, who specialized in study of the Third Reich. He was born in Austria to Jewish parents. After the 1938 Anschluss with Hitler’s Germany, he was put on the first Kindertransport train to leave Vienna. He was initially housed in a refugee camp at Lowestoft in England. He died age 80 on 15-02-2005.

on 25-06-1924 at Gut Pischkowitz in Lower Silesia (born 05-03-1902 at Gut Pischkowitz; she died 18-12-1987 in Anaheim, Orange County, California ), the daughter of the landowner Wolfgang Andreas von Eichborn auf Pischkowitz and Edelgard, born von Rosen from the Neudorf house. The daughter Tatjana Marie Eva Cäcilie (born 04-06-1925 in Breslau) was born from the marriage. This marriage was divorced on 18-04-1932 in Brieg (Lower Silesia), but the judgment only became final on 19-03-1933 due to an appeal by the wife. Daughter Tatiana from then on lived with her father.In his second marriage, Woyrsch married On 21-09-1934 in Bad Salzbrunn (Lower Silesia) Inez Freiin von Tschammer and Quaritz (born 21-12-1908 in Nieder-Tschirnau, Guhrau district, Lower Silesia; 02-09-2001), the daughter of the landowner Siegfried Freiherr von Tschammer and Quaritz auf Quaritz and Edith, born von Lieres and Wilkau (Stephanshain House). From this marriage three sons and one daughter were born.