then the capital of the large eastern European empire of Austria-Hungary.

and Karl, “the eldest son followed this family tradition.”  According to some sources, Wiligut’s father was a well-placed man in Imperial circles, who transferred from the Landwehr to police duty upon his marriage. In 1880, “at the age of fourteen, Karl began attending the Imperial Cadet School at Vienna-Breitensee and in December 1884 he joined the 99th Infantry Regiment at Mostar,” in what is now Bosnia-Herzegovina. “He was promoted second leutnant in November 1888, During this early period of his military career, he served with the 99th  88th and 47th Infantry Regiments” of the Austro-Hungarian Army. In 1900, while stationed at Znaim in Moravia, Wiligut became intrigued by a curious prehistoric menhir called the Rabenstein

, the subject of much local folklore. As a result, he began reading the books of Guido von List

, a fellow Austrian and founder of the Ariosophy movement, and tried his own hand at volkisch poetry. In 1906, he married Malwine Leurs von Treuenringen of Bozen, with whom he had two daughters, Gertrud and Lotte. A twin brother of one of the girls died as an infant, a devastating tragedy for Wiligut, who was desperate for a male heir to which he could pass on his “secret knowledge”, which estranged him from his wife. His daughter Gertrud was born in Vienna in 1908 and, while there, Wiligut made the acquaintance of Theodore Czepl, a member of the Order of the New Templars.

, a cousin of Wiligut’s, his wife, Marie Thaler, the well-known actress, and several ONT brothers.”  Willy Thaler, died age 82 in 1981, in St. Gallen. During the course of these meetings, Wiligut revealed “the he had received instruction on the runes from his grandfather Karl Wiligut (1794-1883) and dated his formal initiation into the family secrets by his father” in 1890. And what secrets! The elder Wiligut told 24-year-old Karl that he was “the last descendant of a long-line of Germanic sages, the Uiligotis of the Asa-Uana-Sippe, which dated back to a remote prehistoric era. Wiligut claimed to possess ancestral-clairvoyant memory, which enabled him to recall the history and experiences of his tribe over thousands of years.” Wiligut believed that Germany was originally settled in 228.000 B.C. by people from the lost continent of Atlantis and that his family began in the magical city of Arual-Joruvallas. He insisted that the Bible was much older than anyone thought, that the events of the New Testament had taken place in Germany and not Palestine, and that Jesus Christ was really Krist, an avatar who had founded the Irminist religion in 12.500 B.C

The Wiligut family were supposed to be sages of Irminism who were driven into the northern European wilderness by rival sorcerers in 1.200 B.C. Wiligut’s budding career in Ariosophy was cut short in 1914 by another catastrophe–World War I. “In October 1914, he became a staff officer in the 30th Infantry Regiment, witnessing action against the Russian army in the Carpathians along the north-eastern flank of the (Austro-Hungarian) empire. Following an exhausting campaign during which he was either in battle or on long night marches, Wiligut, a follower of Dion Fortune

was promoted to Oberstleutnant and transferred back to Graz to organize reinforcements for the 14th and 49th Infantry Regiments.”

Dion Fortune was a 20th century spiritual teacher and Avalonian mystic. Her early spiritual training was within the Theosophical society and when she was 26 she had a dream which would direct much of her later work. She died in 1946, age 56, of acute Leukemia but her work has continued through her Fraternity and those generations of occultists who continue to study and practice her methods.

He was then posted to the Italian front where he held a succession of commands between June 1915 and” was “promoted to the rank of Oberstleutnant in August 1917. In May 1918, Wiligut was recalled from the front in the South Tyrol and placed in command of camps for returned soldiers at Zolkiew, north of Lemberg in the Ukraine.” Discharged in January 1919, Wiligut brought his family to Salzburg.

But like many Austro-Hungarian staff officers, he felt that his country had been cheated of victory in the war. The empire, he felt, had been brought down by the political intrigues of (A) the Vatican; (B) Freemasonry; and (C) the Jews. What was needed, he thought, was a new German-speaking empire. In 1922, the retired colonel founded his own volkisch newspaper, Der Eiserne Besen, The Iron Broom and began calling for a right wing revolt to overthrow the socialist Austrian republic. “Matters abruptly climaxed in November 1924 when Wiligut was involuntarily committed to the Salzburg mental asylum, where he was certified insane and remained an inmate until his release in early 1927.” Wiligut’s disciples -Ernst Rudiger

, Friedrich Schiller and Werner von Bulow – assisted his daughters, Gertrud and Lotte, in persuading the Austrian courts to let him out. Five years later, in 1932, heeding the call of “the Higher Powers,” Wiligut emigrated to Germany and settled in Bogenhausen, a suburb of Munich. Shortly thereafter, another disciple, Richard Anders, introduced the elderly sorcerer to his good friend, SS Reichsführer, Heinrich Himmler

, a rising star in the NSDAP or Nazi Party. Himmler, who was deeply interested in German prehistory, “was evidently impressed by Wiligut’s ancestral-clairvoyant memory and decided to exploit as fully as possible this unique source of information on ancient Germanic religion and traditions.”

“In September 1933, Wiligut joined the SS under the pseudonym ‘Karl Maria Weisthor.'” Wiligut and Himmler became fast friends. Himmler never tired of hearing the old man talk about “the hidden history of Atlantis,” as revealed in his visions, or reading Wiligut’s endless magazine articles on European prehistory.

Wiligut designed the dreaded SS Totenkopfring and hat badge, plus the runic symbols used on black SS uniforms and flags.

With his newest disciple, Gunther Kirchhoff, he sent archaeological teams to investigate prehistoric sites at Gaggenau in 1934, Germany’s Murg valley in 1936 and Glozel, France in 1940. Money was no obstacle. Himmler created the SS-Ahnenerbe in 1936, promoted his elderly mentor-in-magic to SS-Brigadefuhrer, Malwine Leuts von Treuenringen and turned him loose on several dozen crackpot projects. First prize undoubtedly goes to “Wiligut’s Tunnel.” This was a vertical tunnel 16 kilometres,10 miles, deep begun in Hungary in 1941, designed to carry an elevator car that would lower Himmler and Wiligut into “the Inner World of Agharti”. Millions were spent on the tunnel and work continued until November 1944, when the lack of supplies forced the SS project to close. But age had finally caught up with the old warlock. He resigned from active duty in the SS in August 1939 and moved to his “beloved Goslar” the following year. Himmler sent Elsa Baltrusch, a member of his household staff, to look after Wiligut, who spent his declining years with his runes and spells and ancient artefacts. Evacuated to Austria in 1943, Wiligut was there when the war ended. He was briefly detained and questioned by the British Army at Velden, but then was allowed to return to Germany. He fell ill during the trip in December 1945. The journey proved too much for the old man and he was hospitalized on arrival. 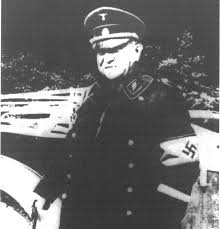 After this he was permitted to return to Salzburg, but he soon moved on to Arolsen in Hesse. His gravestone is inscribed with “UNSER LEBEN GEHT DAHIN WIE EIN GESCHWÄTZ” (“Our Life Passes Away Like Idle Chatter”) Karl Maria Wiligut died on 03-01-1946, age 79, of a stroke, the last of his secret line.” Wiligut is buried on the City cemetery of Bad Arolsen. Close by the grave of SS Standartenführer, Joachim Richter