A German Vice Admiral and one of the final occupants of the Führerbunker during the battle of Berlin, in 1945

graduated from the German Naval Academy

through the Weimar Republic and Nazi periods. In 1942, he was commander of the heavy cruiser Prinz Eugen

, and met Joseph Goebbels (did you know)

then Reich Propaganda Minister, when Goebbels accompanied a party of journalists on a tour of the ship. The ship finally surrendered to the British at Copenhagen in May 1945, and was then handed over to the Americans. In July 1946, she survived two nuclear tests in Bikini Atoll.

Towed later to Kwajalein Atoll, the Prinz capsized on 22-12-1946. As a result of this meeting, Goebbels arranged to have Voss appointed Naval Liaison Officer to Adolf Hitler´s  (did you know) headquarters in March 1943. Voss was present during the bomb plot against Hitler on 20 July 1944. He was in the conference room at Hitler’s Rastenburg Headquarters Wolfsschanze as Kriegsmarine

made an excuse to use a washroom in Wilhelm Keitel´s

office where he with his handicapt hand used pliers to crush the end of a pencil detonator inserted into a 1 kilogram (2.2 lb) block of plastic explosive wrapped in brown paper. The detonator, which consisted of a thin copper tube containing acid, took ten minutes to silently eat through wire holding back the firing pin from the percussion cap. The primed bomb was then placed in a briefcase under a table around which Hitler, Voss and more than 20 officers had gathered. Between 12:40 and 12:50 the bomb detonated, destroying the conference room. Although Hitler survived with minor wounds, three officers, Rudolf Schmundt,

and a stenographer were fatally injured and died soon afterwards. Voss was also wounded in the bomb blast but he quickly recovered. He became a recipient of the Wound Badge of 20 July 1944. Initially his award class was presented in black but then it was upgraded to silver and finally gold because he was wounded a number of times after the initial award. Voss was the only member of the Wehrmacht to have received all three badges.

Liaison Officer, Voss accompanied Hitler, Goebbels, and their entourages into the Führerbunker under the Reich Chancellery building in central Berlin in January 1945. In the final months of the Third Reich

, Voss became a close confidante of Goebbels and his wife Magda Goebbels.

He was aware that the Goebbels had decided that they would not leave the bunker, but would kill their children Dr. Ludwig Stumpfegger

and then themselves once Hitler was dead. Voss then joined the group led by SS-Brigadeführer, one of Adolf Hitler’s last remaining Generals, Wilhelm Mohnke, Mohnke died old age 90, on 06-08-2001, in Hamburg-Rahlstedt, Wilhelm Mohnke

which broke out of the bunker and tried to escape from Berlin. Most of the group were captured by Soviet forces the same day. Voss was brought back to the bunker for questioning, and to identify the partly burned bodies of Joseph and Magda Goebbels, and also the bodies of their six children, who had been poisoned. 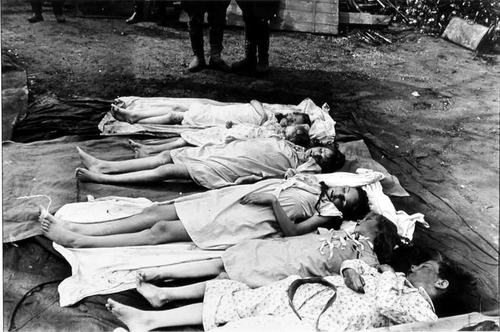 The Soviet account states:”Vice-Admiral Voss, being asked how he identified the people as Goebbels, his wife and children, explained that he recognised the burnt body of the man as former Reichsminister Goebbels by the following signs: the shape of the head, the line of the mouth, the metal brace that Goebbels had on his right leg, his gold NSDAP badge and the burnt remains of his party uniform.” General der Infanterie, Hans Krebs already had identified the by Hitler’s adjutant, SS Obergruppenführer, Otto Günsche burnt corpses of Hitler and Eva Braun (Braun parents). Hitler’s driver SS Obersturmbannführer, Erich Kempka

took care for the nine cans of needed fuel. Voss was made a Soviet prisoner of war. In August 1951, he was prosecuted by the Soviet authorities on charges that “he held a command post in Hitler’s war fleet, that was involved in an aggressive war in breach of international laws and treaties.” In February 1952, the Court Martial of the Moscow Military District sentenced him to 25 years’ imprisonment. By a decree of the Presidium of the Supreme Soviet in December 1954,

however, he was released and handed over to the German Democratic Republic authorities.
Voss was married twice. He had three children with his first wife, and his second wife Irmgard brought two more children into the marriage. After the war and being a prisoner of war, the family lived in Eutin, Schleswig-Holstein, where he last lovingly cared for the 13 grandchildren.

Voss died in Berchtesgaden, Bavaria at the age of 72, on 18-11-1969 and is buried with his wife Hertha, born Lembke, who died old age 98, in 1998, on the Bergfriedhof in Berchtesgaden, close by the graves of Paula Hitler