attended Washington College in Chestertown, Maryland, where he was a member of the Washington Players drama club, the YMCA, the Mount Vernon Literary Society, and the football and track teams. He was also an officer of the Theta Chi fraternity.

He graduated with a Bachelor of Arts degree in 1938, having enlisted in the army as a private on 23-07-1937. He was commissioned with the rank of second lieutenant on 16-03-1938. Vandervoort transferred to the newly established paratroops in the summer of 1940, and was promoted to first lieutenant on 10-10-1941. Promoted to captain on 03-08-1942, he served as a Company Commander in the 505th Parachute Infantry Regiment, motto H-Minus

of the 101 Airborne Division

and was promoted to major on 28-04-1943, and served as Operations Officer (S-3) in the 504th Parachute Regimental Combat Team, nickname Devils in Baggy Pants

, at the invasion of Sicily and in the landings at Salerno.

Promoted to lieutenant colonel on 01-06-1944, he was the Commanding Officer of the 2nd Battalion, 505th PIR, 82nd Airborne Division,

nickname “All American”. During the airborne landings in Normandy Vandervoort led his battalion in defending the town of Sainte-Mère-Église on 6 June in “Mission Boston”, despite having broken his ankle on landing

He received the Distinguished Service Cross

Despite significant losses, the town was taken by his men of the 505th led by Lieutenant Colonel Edward Krause.

born 29-11-1912 in Metropolis, Illinois and died 16-05-1969, age 56 in Fayetteville, NC, was the American paratrooper who landed on the church tower in Sainte-Mère-Église, the first village in Normandy liberated by the Americans on D-Day, June 6, 1944. During “Operation Market Garden” in September 1944,

Vandevoort led the assault on the

described Vandervoort as “one of the bravest and toughest battle commanders I ever knew”. At Goronne he was wounded by mortar fire, so was unable to take part in the divisions’ advance into Germany. He was promoted to colonel on 07-07-1946, and retired from the army on 31 August. After studying at Ohio State University he joined the Foreign Service in 1947. Benjamin Vandervoort died on the 22-11-1990 at the age of 73 years at a nursing home from the effects of a fall. He had two children with his wife Nedra; a son and a daughter. In the early 1990s, the United States Army Center for Leadership at Fort Leavenworth, Kansas, selected one or two colonels or lieutenant colonels from every American War from the Revolution through Vietnam. Colonel Vandervoort was selected as the outstanding ground battle commander for World War II. He is honored by a brief biography and several photographs in what is known as “Leadership Hallway” located on the second floor of Bell Hall. Vandervoort was portrayed by actor John Wayne 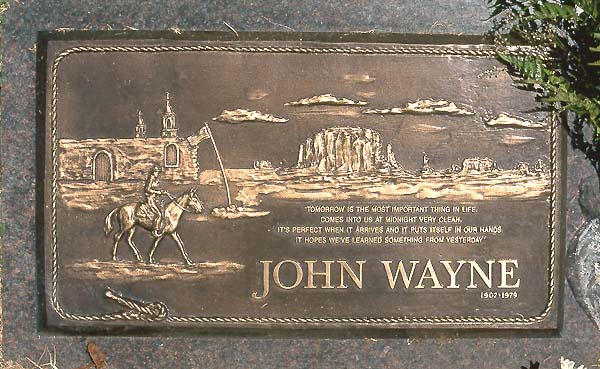 Vandervoort being a decade younger than Wayne. Benjamin Vandervoort died on the 22-11-1990 at the age of 73 years at a nursing home from the effects of a fall and is buried on Beaufort National Cemetery, Beaufort, South Carolina, Section 20, grave 59.