and his parents moved to Florida when he was an infant and he was raised there. Van Fleet received his high school education at the Summerlin Institute in Bartow, Florida. He grew up and was trained with a number of illustrious military men. He was a class mate of General Dwight Eisenhower

at the United States Military Academy

And as Commanding General of the Eighth United States Army

during the Korean War, he was preceded in that position by Lieutenant General Matthew Bunker Ridgway

and succeeded in that position by Lieutenant General Maxwell D. Taylor

. As was true of his contemporaries, Van Fleet served in both the First World War and World War II. In the First World War, Van Fleet was a battalion commander, as part of the American Expeditionary Force, under General John J. Pershing, On 15-07-1948, age 87, Pershing died of coronary artery disease and congestive heart failure at the Walter Reed Army Medical Center in Washington, D.C.

Prior to and during the early part of the Second World War, Van Fleet commanded the Eighth Infantry Regiment

and led it into combat during the D-Day landings on Utah Beach in June 1944.

North Carolina. In addition, as you will read later, Van Fleet also served in the Korean War, so his military service spanned three major wars. Van Fleet was widely and highly regarded as an outstanding military officer. But he was blocked from promotion because the Army Chief of Staff, General Georg Marshall

, erroneously confused Van Fleet with a well-known officer, with a similar name, who was an alcoholic. When George Marshall learned of his mistake, Van Fleet was quickly promoted to divisional and corps command, and served under General Georg Patton

during the remainder of the Second World War. Following the Second World War, in 1946, General Van Fleet was sent to Greece, to aid the Greek government in its battle during the Greek Civil War. The Greek Civil War was essentially an attempted power grab by the communists to take over Greece from its non-communist government and civilians General Van Fleet supervised 250 United States military advisors and administered $ 250 million in aid to the Greek government. Several years later, from August 1950 to April 1951, General Van Fleet became the Commanding General of the United States Second Army. Second U.S. Army was commanded from 1940 to 1943 by Lieutenant General Ben “Yoohoo” Lear.

He was succeeded by Lieutenant General Lloyd Fredendall

after Fredendall’s removal from command in North Africa. General Fredendall held command until war’s end. Following that position, he replaced General Matthew B. Ridgway as commander of the United States Eighth Army, and the United Nations forces in Korea. That position was probably his most difficult one during his entire military career. The armed forces under General Van Fleet’s control in Korea were vastly outnumbered by the numerically superior Communist forces, consisting of the North Korean and Communist Chinese armed forces. Being in command of the Eighth United States Army, plus the United Nations Forces, during war time conditions, was probably the pinnacle of General Van Fleet’s career. But unfortunately the outcome of that war was somewhat disappointing for the United States and for the United Nations. It ended in a stale mate, and continued the totalitarian oppression of the North Koreans for many more decades, and into the present.

Here he welcomes General William Morrow Fechteler in Korea. General Van Fleet must have felt some of the responsibility for that disappointment. But even worse than his professional disappointment, General Van Fleet must have been devastated by the loss of his only son, lieutenant James Alward Jr., a United States Air Force officer, in the Korean War on 04-04-1952, age 26

had called General Van Fleet “America’s greatest general”. General James Van Fleet was clearly a Dutch American and probably from quite a number of generations back. His original family name was probably Van Vliet, but that name was changed to the more English sounding name of Van Fleet. General Van Fleet was married to Helen Moore Van Fleet [1892-1984], and had two surviving daughters and twelve grandchildren. 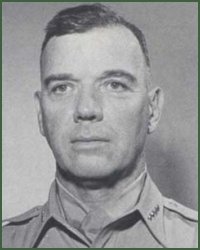