was the seventh child of Franjo and Marija Broz. His father, Franjo Broz, was a Croat, while his mother Marija, born Javeršek, was a Slovene.

After spending part of his childhood years with his maternal grandfather in village of Podsreda, he entered primary school in 1900 at Kumrovec, he failed the 2nd grade and graduated in 1905. In the autumn of 1913, he was drafted into the Austro-Hungarian Army.

He was sent to a school for non-commissioned officers and became a sergeant, serving in the 25th Croatian Regiment based in Zagreb.

Tito was a great lover. He loved women almost possessively, they were often married or in a relationship. He had children, at least 9, of different women. They were all far younger than him, almost like a rule, and he would be charged today for the difference in years as a sex offender and he would spend his time in prison. In May 1914, Broz won a silver medal at an army fencing competition in Budapest. At the outbreak of World War I in 1914, he was sent to Ruma, where he was arrested for anti-war propaganda and imprisoned in the Petrovaradin fortress.

In January 1915, he was sent to the Eastern Front in Galicia to fight against Russia. He distinguished himself as a capable soldier, becoming the youngest Sergeant Major in the Austro-Hungarian Army. For his bravery in the face of the enemy, he was recommended for the Silver Bravery Medal

but was taken prisoner of war before it could be formally presented. On Easter 25-03-1915, while in Bukovina, he was seriously wounded

and captured by the Russians. After thirteen months at the hospital, Broz was sent to a work camp in the Ural Mountains where prisoners selected him for their camp leader.

In February 1917, revolting workers broke into the prison and freed the prisoners. Broz subsequently joined a Bolshevik group. On 06-04-1941, German, Italian, and Hungarian forces launched an invasion of Yugoslavia. On 10-04-1941, Slavko Kvaternik,

Tito responded by forming a Military Committee within the Central Committee of the Yugoslav Communist Party. Attacked from all sides, the armed forces of the Kingdom of Yugoslavia quickly crumbled. On 17-04-1941, after King Peter II,

he died in Denver, Colorado, on 03-06-1970 after a failed liver transplant. and other members of the government fled the country, the remaining representatives of the government and military met with the German officials in Belgrade. They quickly agreed to end military resistance. On 01-05-1941, Tito

issued a pamphlet calling on the people to unite in a battle against the occupation. On 27-06-1941, the Central Committee of the Communist Party of Yugoslavia appointed Tito Commander in Chief of all project national liberation military forces. On 01-07-1941, the Comintern sent precise instructions calling for immediate action. Despite conflicts with the collaborating Chetnik movement Tito’s Partisans succeeded in liberating territory, notably the “Republic of Uzice”. During this period, Tito held talks with Chetnik leader Draza Mihailoviç,

In liberated territories, the Partisans organized People’s Committees to act as civilian government. The Anti Fascist Council of National Liberation of Yugoslavia (AVNOJ)

convened in Bihac on 26–27 November 1942 and in Jajce on 29-11-1943. In the two sessions, the resistance representatives established the basis for post-war organization of the country, deciding on a federation of the Yugoslav nations.

In Jajce, a 67-member “presidency” was elected and established a nine-member National Committee of Liberation, five communist members, as a de facto provisional government. Jovanka Budisavljević Broz 7-December 1924 – 20 October 2013, was the former First Lady of Yugoslavia and the widow of Yugoslav leader Josip Broz Tito. She held the rank of major in the Yugoslav People’s Army.

Tito was named President of the National Committee of Liberation.

Tito became increasingly ill over the course of 1979. On 7 January and again on 11-01-1980, Tito was admitted to the University Medical Centre in Ljubljana,

the capital city of SR Slovenia, with circulation problems in his legs. His left leg was amputated soon afterward due to arterial blockages and he died of gangrene at the Medical Centre Ljubljana on 04-05-1980, age 87 at 3:05 in the afternoon, three days short of his 88th birthday. Tito is buried in the Tito Mausoleum in Belgrado. 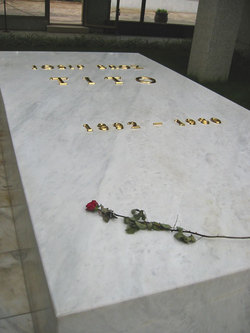