provided the decisive ideas for the A4 rocket engine and his research enabled rockets to head towards space. Launched in 1938, the MS Togo was a German merchant ship. At the outbreak of World War II in early September 1939, she was in the French port of Douala in Africa, but avoiding internment and running the Allied blockade, she successfully returned to Hamburg. Requisitioned by the Kriegsmarine

as Schiff 14, in April 1940 she participated in the invasion of Norway; in August 1940 was converted to a mine layer as part of the German plan to invade England; then from June 1941 began undergoing conversion to become the armed auxiliary cruiser, HSK Coronel

. Following Coronel’s unsuccessful attempt in February 1943 to become the last German commerce raider of World War II, she was then used as a minesweeper, Sperrbrecher, before being recommissioned in late 1943 as the NJL Togo, a night fighter direction vessel (Nachtjagdleitschiff), operating in the Baltic Sea. As NJL Togo, she was the second of the Kriegsmarine’s World War II radar ships, and the only one to survive the war. Togo was equipped with a FuMG A1 Freya radar

for early warning, which had a range of around 40–75 km (22–40 nmi; 25–47 mi). She also had a Würzburg-Riese gun laying radar with a similar range plus night fighter communications equipment. She was heavily armed with three 10.5 cm FlaK 38 anti-aircraft guns, four twin 3,7 cm FlaK 43 guns, four quadruple and three single 2 cm FlaK 30 guns. In late 1942, Togo was converted into an auxiliary cruiser, Hilfskreuzer. As intended ‘merchant harassment cruiser’ Coronel, she was known to the Kriegsmarine as HSK 10, and designated Schiff 14. To the Royal Navy, she was Raider K. She was to be named after the Battle of Coronel, Admiral Maximilian Graf von Spee’s

victory over a British cruiser flotilla off the coast of Chile in November 1914. Admiral von Spee went down with his flagship, the Scharnhorst, age 53, on 08-12-1914. Converted at the Wilton-Fijenoord shipyards in Rotterdam and the Stettiner Oderwerke yard at Stettin, she was recommissioned in December 1942. 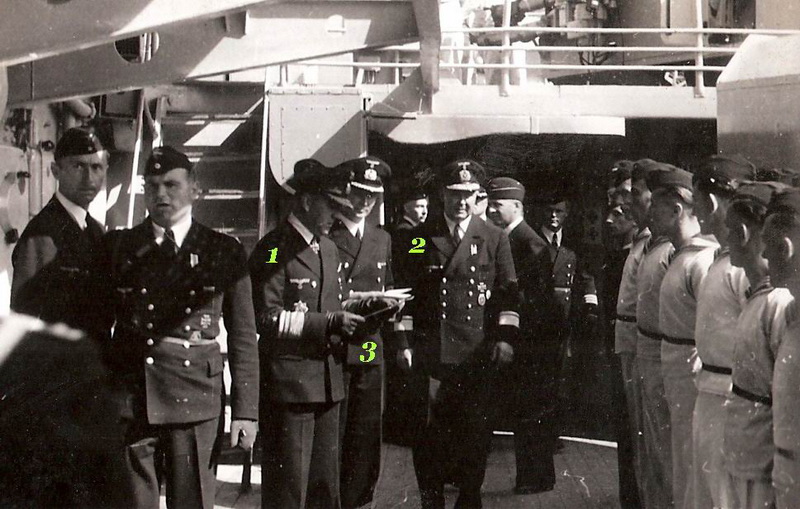 Her armament consisted of six TK15 15 cm guns, six FlaK 44 cm guns, four 2 cm machine guns in a twin mount, and a few 2 cm guns in single mounts. She was also designed to carry three aircraft, but these were never installed. She was commanded by Kapitän zur See Ernst-Ludwig Thienemann, and carried a crew of 16 officers and 331 men. Relying on the element of surprise, Schiff 14 Coronel departed from Norway on 31-01-1943 and attempted to break out into the Atlantic through the English Channel. However, her presence was already known to the British through ULTRA decrypts. With a large escort of mine layers and patrol boats, but hampered by storms and minefields, and by twice running aground on sandbanks, she moved on by stages to Sylt, Dunkirk and Calais and on 10 February successfully ran the gauntlet of the coastal artillery at Dover. She then came under repeated air attack, and having suffered bomb damage, was forced to put in to Boulogne. As the damage was too severe to be repaired in an occupied French port, she was forced to return to Kiel, arriving there on 02-03-1943. As it was the custom for German commerce raiders to be named by their captains after reaching the open sea, her failure to clear the Channel meant that she was not formally designated as the Hilfskreuzer Coronel but instead remained as Togo for the remainder of the war.

Thienemann retired in Bonn where he died at the age of 67, on 27-06-1966 and is buried with his wife Charlotte, born Lorkane, who died old age 90, on 30-04-1981, on the cemetery Rüngsdorf a suburb of Bonn. Also buried on this cemetery are, Fleet Captain,Kapitanleutnant der 2nd Artillerie Träger Flottille, Walter Haxthausen-Elmershaus