A war photographer, and the companion and professional partner of photographer Robert Capa.

poland
Taro, born Gerta Pohorylle , Gerda,  was born in 01-08-1910, in Stuttgart, into a middle-class Jewish Galician family. Pohorylle attended a Swiss boarding school. In 1929 the family moved to Leipzig, just prior to the beginning of Nazi Germany. Taro opposed the Nazi Party, joining leftist groups. In 1933, she was arrested and detained for distributing anti-Nazi propaganda. Eventually, the entire Pohorylle household was forced to leave Nazi Germany toward different destinations. Taro would not see her family again. Escaping the anti-Semitism of Hitler’s Germany, Pohorylle moved to Paris in 1934. In 1935, she met the photojournalist Endre Friedmann

, a Hungarian Jew, becoming his personal assistant and learning photography. They fell in love. Pohorylle began to work for Alliance Photo as a picture editor. In 1936, Pohorylle received her first photojournalist credential

. Then, she and Friedmann devised a plan. Both took news photographs, but these were sold as the work of the non-existent American photographer Robert Capa 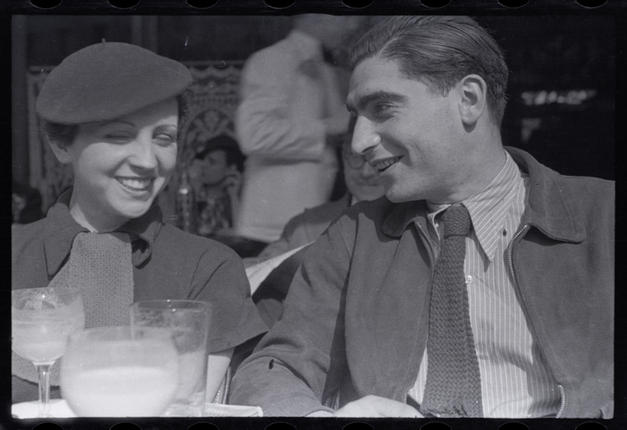 , which was a convenient name overcoming the increasing political intolerance prevailing in Europe and belonging in the lucrative American market. Capa was derived from Friedmann’s Budapest street nickname “Cápa” which means “Shark” in Hungarian. The secret did not last long, but Friedman kept the more commercial name “Capa” for his own name, while Pohorylle adopted the professional name of “Gerda Taro” after the Japanese artist Tarō Okamoto

and Swedish actress Greta Garbo. Okamoto died old age 84 on 07-01-1996 and Garbo died also age 84 on 15-04-1990 in New York. The two worked together to cover the events surrounding the coming to power of the Popular Front in 1930s France. When the Spanish Civil War broke out in 1936, Gerda Taro travelled to Barcelona, Spain, to cover the events with Capa and David “Chim” Seymour

. Seymour died age 44 on 10-11-1956- in New Jersey. Taro acquired the nickname of La pequeña rubia, “The little blonde”. They covered the war together at northeastern Aragon and at the southern Córdoba. Always together under the common, bogus signature of Robert Capa, they were successful through many important publications, the Swiss Züricher Illustrierte, the French Vu.

Their early war photos are distinguishable since Taro used a Rollei camera which rendered squared photographs while Capa produced rectangular Leica pictures. However, for some time in 1937 they produced similar 135 film pictures together under the label of Capa&Taro. Subsequently, Taro attained some independence. She refused Capa’s marriage proposal. Also, she became publicly related to the circle of anti fascist European intellectuals, Ernst Hemingway,

who crusaded particularly for the Spanish Republic. Eric Arthur Blair  who used the pen name  George Orwell, died age 46 on 21-01-1950 in London. The Ce Soir, a leftist newspaper of France, signed her for publishing Taro’s works only. Then, she began to commercialize her production under the Photo. Reporting the Valencia bombing alone, Gerda Taro attained the photographs which are her most celebrated. Also, in July 1937, Taro’s photographs were in demand by the international press when, alone, she was covering the Brunete region near Madrid for Ce Soir.

Although the Nationalist propaganda claimed that the region was under its control, the Republican forces had in fact forced that faction out. Taro’s camera was the only testimony of the actual situation.

During her coverage of the Republican army retreat at the Battle of Brunete, Taro hopped onto the footboard of a car that was carrying wounded soldiers when a Republican tank crashed into its side. Taro suffered critical wounds and died the next day, 26-07-1937, age 26. According to Irene Golden, the nurse who was on duty, her last words were: “Did they take care of my camera?” The circumstances of Taro’s death have been questioned by British journalist Robin Stummer, writing in the New Statesman magazine. Stummer cited Willy Brandt,

later Chancellor of West Germany, and a friend of Taro’s during the Spanish Civil War, that she had been the victim of the Stalinist purge of Communists and Socialists in Spain not aligned to Moscow.

However, Stummer provided no other evidence for this claim. In an interview with the Spanish daily El País, a nephew of a Republican soldier at the Battle of Brunete explained that she had died in an accident. According to the eye-witness account, she had been run over by a reversing tank and she died from her wounds in El Goloso English hospital a few hours later. Due to her political commitment, Taro had become an anti-fascist figure. On August 1, on what would have been her 27th birthday, the French Communist Party gave her a grand funeral in Paris, and buried her at the Du Père Lachaise cemetery in Paris, Field 97. 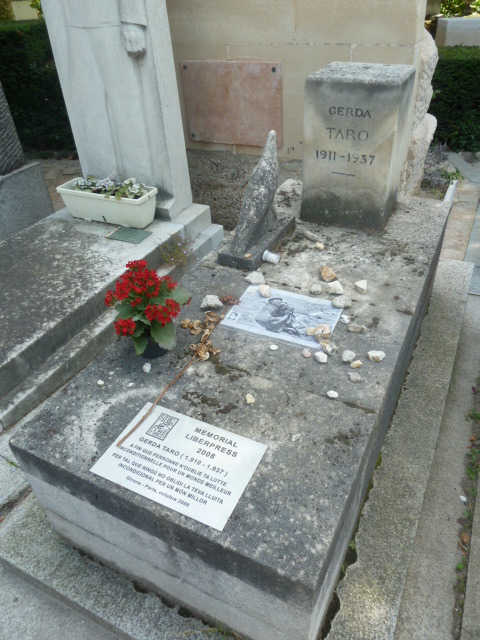