developed an interest for the military early in life. He had actually received a commission in the Marine Corps in 1917 before being transferred to a Cavalry unit in the Army. He spent WW I guarding the Mexican Border. Working his way up through the ranks between the wars, 1933 he wrote a paper on the American Intervention in Northern Russia, as well as one on Operations of the Japanese 3rd Division

at Liaoyang in 1904 for Command and General Staff School.

He was part of a small team sent to England to evaluate the British Intelligence system. He was prompted to full Colonel in early 1942 and assumed command of the 339th Infantry Regiment A few months later he was promoted to Brigadier General and given the job of Assistant Division Commander of the 9th Infantry Division, nickame “Old Reliables”

The 9th infantry Division had the next casualties during their European campaign, killed 2.905, wounded 14.066, missing in action 792, captured 868 and battle casualties 18.631. Stroh played a major role in the 9th Division’s actions in North Africa and Sicily, temporarily commanding the 39th Infantry Regiment. he was awarded the Legion of Merit for his work, and after action reports of his time with the 9th can be found here. He accompanied the 9th Division to England in preparation for the invasion of Normandy, and was awarded a second Legion of Merit for his role in the drive from Utah Beach to Cherbourg. In early July the 8th Infantry Division, nicknamed “Pathfinder” and  “Golden Arrow Division”

Fremont died, age 77, on 13-07-1890 in New York. The division was formed at Camp Fremont, California in 1918. Later known to many of its post World War II soldiers as Eight Up. The unit suffered some set backs, resulting in the relief of a few officers, including the Division Commander. Having proved himself in battle, Stroh was given command of the 8th Infantry Division on 13-07-1944, and led them into Brittany to help capture the vital port of Brest. While attacking the city, he saw his only son Major Harry Richard, a P-47 pilot, being killed when his plane was shot down in support of the 8th,

he burned to death. One story has it that General Stroh had ordered that specific air strike, however according tot he family is seems that the General did see the P-47 crash, not knowing it was his son aboard. Needless to say this affected the General deeply. After the fall of Brest, Stroh was promoted to Major General and awarded a Distinguished Service Medal and Bronze Star for his efforts. After the war General Stroh wrote a short history of the fighting on the Crozon Peninsula for the Military Review. The 8th then moved east to Luxembourg to recover from the damage that had been done to it in Brittany. Rested, the division was sent into the Hürtgen Forest where the casualties from both enemy action and the freezing weather, battered away the division. After having served for two years in a combat theatre, Stroh requested, and was granted, a leave of absence. The death of his son obviously playing a  part in the matter. Due to his ability, General Stroh was the only division commander to leave his unit in combat, and be given another division to command. After a two month leave, he returned to Europe in time for the German Ardennes Offensive. The 106th Infantry Division, “The Golden Lions”,

had been all but destroyed in this action; two of the three infantry regiments almost wiped out. On 7 February Stroh was given command of the 106th and began the job of rebuilding it into a combat ready unit. At the end of the war the division had seen 63 days of combat. It had suffered 417 KIA, 1.278 WIA, and 53 died of wounds. It lost 6.697 personnel taken prisoner. Of that total, 6.500 POWs were eventually returned to American military control after being released at war’s end. The remainder were listed MIA. After the war he served in various administrative posts. He was medically retired in 1947, but immediately called back to duty.

He finally retired permanently in 1949. General Stroh died of complications from his wartime disabilities in 1953, at the age of 61 and is buried with his wife Imogene, born Finger, who died at the old age of 93, in 1985, on the Arlington National Cemetery, Section 30, site 700.. 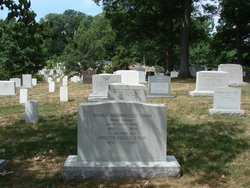