U.S. actor and bomber pilot in WW II. Stewart was the highest-ranking entertainer in the U.S. military.

the son of Elizabeth Ruth (born Jackson) and Alexander Maitland Stewart, who owned a hardware store

His Jackson ancestors served in the American Revolution, the War of 1812 and the American Civil War. The eldest of three children, he had two younger sisters, Virginia and Mary, he was expected to continue his father’s business, which had been in the family for three generations. The Stewart family had deep military roots as both grandfathers had fought in the Civil War,

and his father had served during both the Spanish-American War and World War I. Stewart considered his father to be the biggest influence on his life, so it was not surprising that, when another war eventually came, he too was eager to serve. Members of his family had previously been in the infantry, but Stewart chose to become a military flyer. An early interest in flying led Stewart to gain his Private Pilot certificate in 1935 and Commercial Pilot certificate in 1938. He often flew cross-country to visit his parents in Pennsylvania, navigating by the railroad tracks. Nearly two years before the December 1941 attack on Pearl Harbor, Stewart had accumulated over 400 hours of flying time. Stewart, along with musician/composer Hoagy Carmichael, he died of heart failure, age 82, on 27-12-1981, in California, saw the need for trained war pilots, and joined with other Hollywood celebrities to invest in Thunderbird Field, a pilot-training school built and operated by Southwest Airways in Glendale, Arizona. This airfield became part of the United States Army Air Forces

training establishment and trained more than 10,000 pilots during World War II, and is now the home of Thunderbird School of Global Management. Later in 1940, Stewart was drafted into the United States Army but was rejected for failing to meet height and weight requirements for new recruits—Stewart

was five pounds (2.3 kg) under the standard. To get up to 148 pounds, he sought out the help Metro-Goldwyn-Mayer’s muscle man and trainer Don Loomis, who was noted for his ability to add or subtract pounds in his studio gymnasium. Stewart subsequently attempted to enlist in the Army Air Corps, but still came in under the weight requirement, although he persuaded the AAC enlistment officer to run new tests, this time passing the weigh-in, with the result that Stewart enlisted in the Army in March 1941. He became the first major American movie star to wear a military uniform in World War II. Stewart enlisted as a private and then began pilot training in the USAAC. Stewart here with Major Clark Gable

continued his military training and earned a commission as a second lieutenant in January 1942, just after the attack on Pearl Harbor brought the US directly into the conflict. He was posted to Moffett Field and then Mather Field as an instructor pilot in single- and twin-engine aircraft. Public appearances by Stewart were limited engagements scheduled by the Army Air Forces. Stewart was concerned that his expertise and celebrity status would relegate him to instructor duties “behind the lines.”  His fears were confirmed when he was stationed for six months at Kirtland Air Force Base in Albuquerque, New Mexico

, to train bombardiers. He was transferred to Hobbs AAF to become an instructor pilot for the four-engine B-17 Flying Fortress,

where he trained B-17 pilots for nine months at Gowen Field in Boise, Idaho. “Still, the war was moving on. For the 36-year-old Stewart, combat duty seemed far away and unreachable and he had no clear plans for the future. But then a rumor that Stewart would be taken off flying status and assigned to making training films or selling bonds called for his immediate and decisive action, because what he dreaded most was the hope-shattering spectre of a dead end.” Stewart appealed to his commander, a pre-war aviator, who understood the situation and reassigned him to a unit going overseas. In August 1943, Stewart was assigned to the 445th Bombardment Group

and then as its commander, at the rank of captain. In December, the 445th Bombardment Group flew its B-24 Liberator bombers to RAF Tibenham, Norfolk, England and immediately began combat operations. While flying missions over Germany, Stewart was promoted to major. In March 1944, he was transferred as group operations officer to the 453rd Bombardment Group 453rd Bombardment Group , a new B-24 unit that had been experiencing difficulties. As a means to inspire his new group, Stewart flew as command pilot in the lead B-24 on numerous missions deep into Nazi-occupied Europe. These missions went uncounted at Stewart’s orders. His “official” total is listed as 20 and is limited to those with the 445th. In 1944, he twice received the Distinguished Flying Cross for actions in combat and was awarded the Croix de Guerre. He also received the Air Medal with three oak leaf clusters. In July 1944, after flying 20 combat missions, Stewart was made Chief of Staff of the 2nd Combat Bombardment Wing  of the Eighth Air Force,

and though he was no longer required or expected to fly missions, he continued to do so.  Before the war ended, he was promoted to colonel, one of the few Americans to rise from private to colonel in four years. At the beginning of June 1945, Stewart was the presiding officer of the court-martial of a pilot and navigator who were charged with dereliction of duty when they accidentally bombed the Swiss city of Zurich the previous March—the first instance of U.S. personnel being tried for an attack on a neutral country. The Court acquitted the accused. Stewart continued to play a role in the United States Air Force Reserve after the war, achieving the rank of Brigadier General on 23-07-1959. Stewart did not often talk of his wartime service, perhaps due to his desire to be seen as a regular soldier doing his duty instead of as a celebrity. He did appear on the TV series The World at War to discuss the 14-10-1943, bombing mission to Schweinfurt, which was the center of the German ball-bearing industry. This mission is known in USAF history as Black Thursday due to the high casualties it sustained; 60 aircraft were lost out of 291 B-17s dispatched unescorted to Schweinfurt.

The available escort aircraft lacked the range to accompany them. Upon his request, he was identified only as “James Stewart, Squadron Commander” in the documentary. After the war, Stewart served as Air Force Reserve commander of Dobbins Air Reserve Base in the early 1950s. In 1966, Brigadier General James Stewart flew as a non-duty observer in a B-52 on a bombing mission during the Vietnam War. At the time of his B-52 flight, he refused the release of any publicity regarding his participation, as he did not want it treated as a stunt, but as part of his job as an officer in the Air Force Reserve. After 27 years of service, Stewart retired from the Air Force on 31-05-1968. After his retirement, he was promoted to Major General by President Ronald Reagan.

Shortly before his 80th birthday, he was asked how he wanted to be remembered. “As someone who ‘believed in hard work and love of country, love of family and love of community.'”

Jimmy Stewart died from a pulmonary embolism on 02-07-1997, old age 89, at his home in Beverly Hills. His death came one day after fellow screen legend and 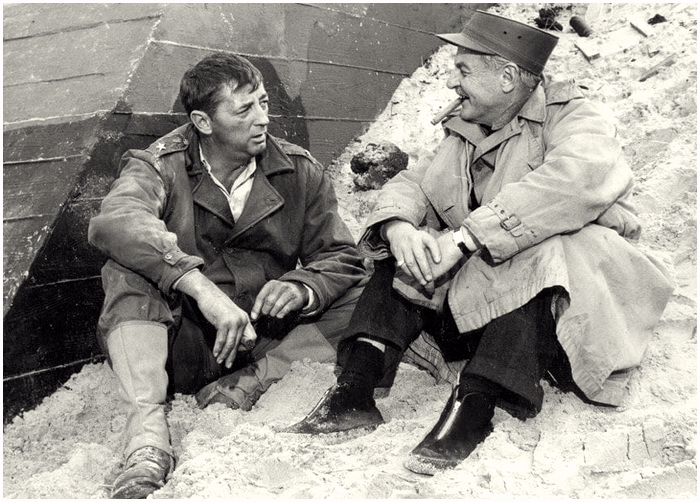