. He received the wounded badge and both the Iron Crosses.

Stapf was allowed in the new Reichswehr, and promoted to Oberst in the summer of 1930. In 1939 he becomes a Communication Officer with the High Command of Hermann Goering’s (did you know) Luftwaffe

and a Generalmajor on 01-04-1939. At the beginning of World War II assigned as General of the Army with the High Command of the Luftwaffe. At the end of the Western invasion in November 1940, he was appointed to commander of the 111th Infantry Division

was shot on 23-01-1945 by partisans between Piotrkow Trybunalski and Tomszow  Mazowiecki, on 01-01-1942, age 52 and became the replacement commander of the XXXXIV General Command, he replaced Generalleutnant der Infanterie, Friedrich Sixt 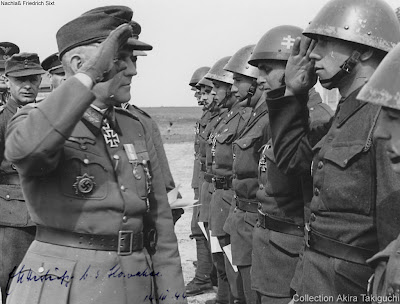 but lost this command already on 26-01-1942 and landed in the Führer Reserve (see Adolf Hitler) (did you know) until 01-03-1942. From 25-07-1942 he is assigned for only one week as the Chief of the Wehrwirtschaftstab, Economic Staff of the Army, East. Promoted to General of the Infantry and awarded with the Swords of the Iron Cross. He was the only receiver of the two different Knight’s Crosses. He was relieved on 15-10-1944 and became the Chief of the Field Economic Office of the OKW. Stapf

, in the government of the new chancellor Konrad Adenauer