the son of the bank clerk Otto Schury, entered the Army Service on 01-04-1924, age 20, as Police Assistance Guard Commander in the Police Service. The son of the banker officer Otto Schury joined the state police in Munich. Promoted to Leutnant on 16-12-1926  and to Oberleutnant on 01-03-1933 he married Maria Seyfferth on 23-08-1933. He is transferred from the Reichswehr to the Wehrmacht

During the Invasion of Poland, soldiers from the 1st Mountain Division

assisted in the round-up of Jewish civilians from Przemyśl for forced labour.

This event was documented in the divisional photographic album. Picture captions demonstrate strong anti-Semitism by the authors 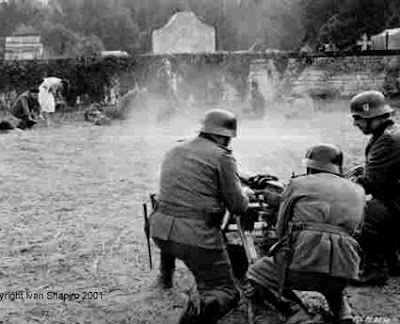 was attacked at the order of Oberstleutnant Josef Salminger,

the commander of GebirgsJäger Regiment 98, a total of 317 civilians were killed. Salminger was killed by partisans, two months later, on 01-10-1943, age 40. Elements from the division took part in the murder of thousands of Italians from the 33 Acqui Infantry Division

, in Albania after the Italian surrender. Divisional commander when Italy capitulated in 1943. The division was engaged and captured by the German 1st Mountain (Gebirgs) Division.

General Chiminello and 58 other Italian officers were shot by an execution commando of Gebirgs-Jaeger Battalion 54 on 03-10-1943. Following the killing of Oberstleutnant Josef Salminger by Greek partisans, the commander of XXII Gebirgs-Armeekorps General der Gebirgstruppe, Hubert Lanz

issued an order of the day on 01-10-1943 calling for a “ruthless retaliatory action” in a 20 km area around the place were Salminger had been attacked. In the village of Lingiades 87 civilians were killed, a total of at least 200 civilians died. Lanz was sentenced to 12 years imprisonment, however, after only three years, on 03-02-1951, he was released and died free at the age of 86, on 15-08-1982, in Munich. Schury also led the company on the Western front. Promoted to Major on 01-03-1941 and commander of the II Battalion of the 100th  Mountain Jäger Regiment

Kreppel later a General Major died old age 86, on 14-02-1985, in Naugerming. Schury, age 41, landed in Soviet captivity and was first released ten years later in October 1955 by the intervention of the Chancellor Konrad Adenauer.

and the famous film maker Leni Riefenstahl. “Triumpf of the Will”, the film chronicles the 1934 Nazi Party Congress in Nuremberg.