. He was in the fields of the first war with the 46th Infantery-Regiment. Reactivated in the Service he on 01-10-1933 as an Oberst was commandeur of the Infantery School in Döberitz.

and in July 1944 were finally destroyed in a pocket east of Minsk. Generalleutnant Vincenz Müller

was taken prisoner. The corps was reformed in April 1945 to defend the middle Rhine and Thuringia under General Herbert Osterkamp.

Generalleutnant Müller died on 15-05-1961, age 66, in somewhat controversial circumstances, as he fell from the balcony of his home on the day he was scheduled to return to hospital; it was rumoured that he had committed suicide when a police vehicle drew up outside. General Herbert Osterkamp survived the war and died age 75 on 17-03-1970 in Dortmund.

Schroth was also involved in the occupation of Chechie on 01-10-1938. He is awarded with the Knight’s Cross for his leading in the battles against the fortresses Brest-Litowsk. 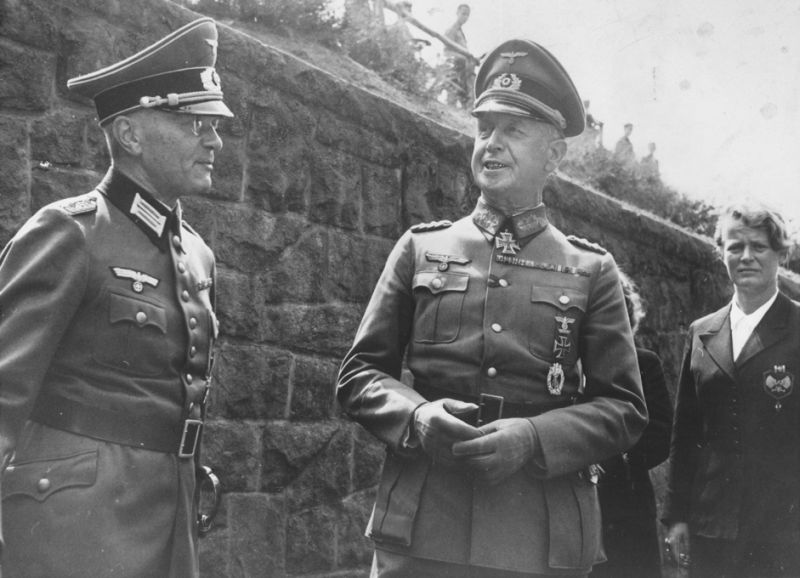 He was appointed with the command of the Wehrkreis XII on 01-05-1943 and Commanding General of the XII Army Corps in Wiesbaden. On 04-08-1944 he was accepted in the Ehrenhof of the Wehrmacht, a group of Field Marshals and Generals who were still trusted by Adolf Hitler after the July 20th bomb attack. Other members were Fieldmarshal, Gerd von Rundstedt,

Schroth served on the “Court of Military Honour,”

a drumhead court-martial that expelled many of the officers involved in the 20 July Plot, assassination attempt on Hitler, from the Army before handing them over to the People’s Court. A session of the People’s Court, trying the conspirators of the 20 July plot, 1944. From left: General of the Infantry Hermann Reinecke

president of the court; Ernst Lautz, chief public prosecutor. Reinecke was sentenced to life imprisonment. His sentence was reviewed by the “Peck Panel”. He was released in October 1954 and died 10-10-1973 (aged 85) in Hamburg, West Germany. Ernst Lautz

Walter Schroth was killed in a car accident, on 03-06-194 at the age of 62 and the circumstances were not clear. He was seriously injured and suffered a fatal rupture of the main artery (aorta)..He is buried on the Old South cemetery of Wiesbaden. Wiesbaden apparently a popular place and you can find the graves of General der Infanterie, Commandeur der 76th Infanterie Division