Nikolajew, near the monument for fallen soldiers of the Krim war, 1853/56. 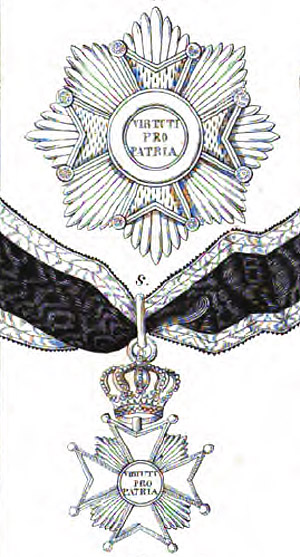 in the Kingdom of Bavaria, a member state of the German Empire. He was the son of Major Karl Schobert and Anna, born, Michaely. Schobert entered the Royal Bavarian Army

in July 1902, as a Fahnrich. He, served primarily in the 1st Bavarian Infantry Regiment “König” under command of Rupprecht, Crown Prince of Bavaria

and underwent pilot training in 1911. During World War I, von Schobert remained as Oberleutnant 1912 and Hauptmann 1915, a Bavarian infantry officer, serving the entire war on the Western Front. Rupprecht, Crown Prince of Bavaria died on 02-08-1955 at Schloss Leutstetten

During the German Spring Offensive of 1918, von Schobert led the 3rd Battalion of the 1st Bavarian Infantry Regiment. For his actions on 23-03-1918, when he personally and successfully led his battalion in the crossing of a canal near Jussy against stiff British resistance, he was awarded the Knight’s Cross of the Military Order of Max Joseph

. This was Bavaria’s highest military honor, comparable to the Prussian Pour le Mérite, and conferred a patent of nobility on a recipient who was a commoner. Hence Eugen Schobert became Eugen Ritter von Schobert, here left  from Generalfeldmarschall  Walther von Brauchitsch.

After World War I, von Schobert remained in the Reichswehr and then the Wehrmacht, steadily rising up the ranks. He was Inspector of Infantry from December 1933 to September 1934 and then commanded the 17th Infantry Division

. He took command of the VII Army Corps on 04-02-1938. In September 1939, von Schobert led his VII Army Corps, where he succeeded General Walther von Reichenau,

in the invasion of Poland as part of the reserve of Army Group South, under Generaloberst der Panzertruppe Gerd von Rundstedt

In May–June 1940, his corps, part of Generalfeldmarschall, Ernst Busch´s

Sixteenth Army of Army Group A

, participated in the invasion of Belgium and Luxembourg and the Battle of France. He received the Knight’s Cross of the Iron Cross for his leadership of the VII Corps in the breakthrough of the Maginot Line and the capture of Nancy and Toul. He remained in command of the corps during preparations for the invasion of Great Britain. Promoted to Generaloberst on 19-07-1940. In September 1940, von Schobert was given command of the Eleventh Army. The army was assigned to Army Group South, under Generaloberst der Infanterie, Johannes Hans Friessner

the invasion of the Soviet Union. During combat operations in the southern Soviet Union, von Schobert and his pilot Hauptmann, Wilhelm Suwelack were killed when their Fieseler Storch observation aircraft crashed in a Soviet minefield. 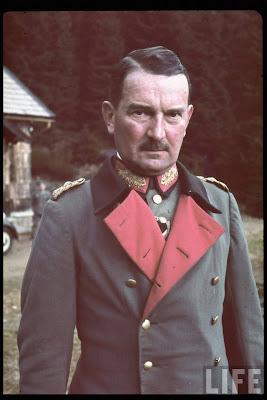 On 12-09-1941 von Schobert against the advise of danger from the close front, started with his pilot Suwalack, in the Fieseler Storch for an observation flight. The quarter master Oberstabindentant, Dr. Wolfgang Bernklau

situated close by on the frontline, remembers that the Fieseler flying low over them, turned and crossed the Dnjepr and some time later they heard a detonation and saw a smoke cloud. The plane had landed in a Russian minefield and exploded and both men burned to death. His pilot was Staffelkapitan Hauptmann Wilhelm Suwalek

The little remains were taken to Nikolajew and buried near the monument for fallen soldiers from the Krim war 1853/56 in Bug Liman near Nikolajew, now Ukraine. The commander-in-chief of the army, Field Marshal Walter von Brauchitsch,

They had three children: two sons and one daughter. His younger son was killed in combat in 1944 while serving as a fighter pilot for the Luftwaffe. 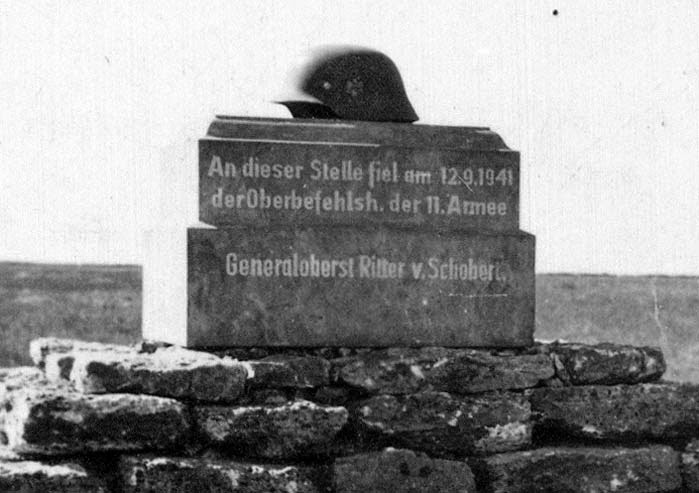