Schindler and Schindler-Pelzl, Oskar and Emilie.

at that time a province of the Austro-Hungarian Monarchy.

. the son of Hans Schindler and Franziska Luser, a Roman Catholic German couple in the German region of Schönhengstgau in Moravia within the Austro-Hungarian Empire. After graduating, he started working as a sales manager for the electronic company Moravian Electrotechnic. An ethnic German and a Catholic, he remained in Svitavy during the interwar period and held Czech citizenship after Moravia was incorporated into the newly established Czechoslovak Republic in 1918. After attending a series of trade schools in Brno and marrying Emilie Pelzl

in 1928, Schindler held a variety of jobs, including working in his father’s farm machinery business in Svitavy, opening a driving school in Sumperk, and selling government property in Brno. He also served in the Czechoslovak army

and in 1938 attained the rank of lance corporal in the reserves. Schindler began working with the Office of the Military Foreign Intelligence of the German Armed Forces in 1936.

In February 1939, five months after the German annexation of the Sudetenland, he joined the Nazi Party

. An opportunist businessman with a taste for the finer things in life, he seemed an unlikely candidate to become a wartime rescuer.

During World War II, Schindler rescued more than 1.000 Jews from deportation to Auschwitz, Nazi Germany’s largest killing center. Following the German invasion and occupation of Poland, Schindler moved to Krakow from Svitavy in October 1939. Taking advantage of the German occupation program to “Aryanize” and “Germanize” Jewish-owned and Polish-owned businesses in the so-called General Government, he bought Rekord Ltd., a Jewish-owned enamelware manufacturer and converted its plant to establish the German Enamelware Factory Oskar Schindler, 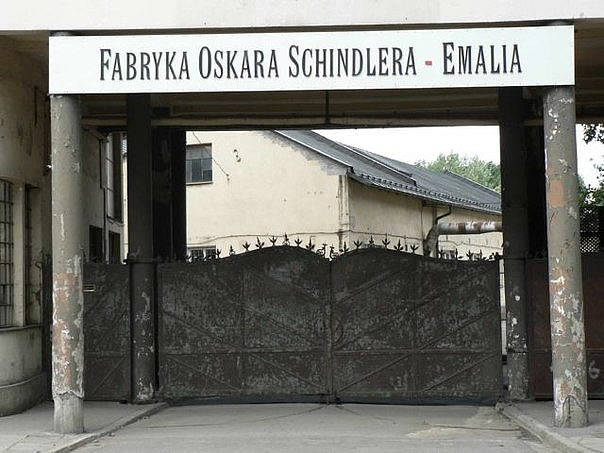 also known as Emalia, in November 1939. While Schindler operated two other factories in Krakow, only at Emalia did he employ Jewish workers who resided in the nearby Krakow ghetto. At its peak strength in 1944, Emalia employed 1,700 workers; at least 1,000 were Jewish forced laborers, whom the Germans had relocated from the Krakow ghetto after its liquidation in March 1943 to the forced labor camp and later concentration camp Krakau-Plaszow. Although the prisoners deployed at Emalia were still subject to the brutal conditions of the Plaszow concentration camp, Schindler intervened repeatedly on their behalf, through bribes and personal diplomacy, both for the well-being of Jews threatened on an individual basis and to ensure, until late 1944, that the SS did not deport his Jewish workers. In order to claim the Jewish workers to be essential to the war effort, he added an armaments manufacturing division to Emalia. During the liquidation of the Krakow ghetto in March 1943, Schindler allowed his Jewish workers to stay at the factory overnight. After the SS re-designated Plaszow as a concentration camp in August 1943, Schindler persuaded the SS to convert Emalia into a sub camp of Plaszow. In addition to the approximately 1.000 Jewish forced laborers registered as factory workers, Schindler permitted 450 Jews working in other nearby factories to live at Emalia as well, saving them from the systematic brutality and arbitrary murder that was part of daily life in Plaszow. Schindler did not act here without risk or cost; his protection of his Jewish workers and some of his shady business dealings led SS and police authorities to suspect him of corruption and of giving unauthorized aid to Jews. German SS and police officials arrested him three times, while he owned Emalia, but were unable to charge him. In October 1944, after the SS transferred the Emalia Jews to Plaszow, Schindler sought and obtained authorization to relocate his plant to Brünnlitz in Moravia, and reopen it exclusively as an armaments factory. One of his assistants drew several versions of a list of up to 1.200 Jewish prisoners needed to work in the new factory. These lists came to be known collectively as “Schindler’s List.” Schindler met the specifications required by the SS to classify Brünnlitz as a sub-camp of Gross Rosen concentration camp and thereby facilitated the survival of around 800 Jewish men whom the SS deported from Plaszow via Gross-Rosen to Brünnlitz

and between 300 and 400 Jewish women from Plaszow via Auschwitz.

infamous for performing human experiments on camp inmates in Auschwitz, including children, for which Mengele was called the “Angel of Death”.  Though classified as an armaments factory, the Brünnlitz plant produced just one wagonload of live ammunition in just under eight months of operation. By presenting bogus production figures, Schindler justified the existence of the sub-camp as an armaments factory and thus facilitated the survival of over 1,000 Jews, sparing them the horrors and brutality of conventional camp life. Schindler left Brünnlitz only on 09-05-1945, the day that Soviet troops liberated the camp. After the war, Schindler and his wife Emilie settled in Regensburg, Germany, until 1949, when they immigrated to Argentina. In 1957, permanently separated but not divorced from Emilie, Schindler returned alone to Germany.

In 1962, Yad Vashem awarded Schindler the title “Righteous Among the Nations” in recognition of his efforts to save Jews during the Holocaust at great personal risk.

Emilie was similarly honored in 1993. Schindler died in Germany, penniless and almost unknown, on 09-10-1974, age 66, of heart problems. Many of those whose survival he facilitated-and their descendants-lobbied for and financed the transfer of his body for burial in Israel. In 1993, the United States Holocaust Memorial Council posthumously presented the  Medal of Remembrance Rarely presented, this medal honors deserving recipients for extraordinary deeds during the Holocaust and in the cause of Remembrance.

Emilie Schindler accepted the medal on behalf of her ex-husband at a ceremony in the Museum’s Hall of Remembrance. Emilie Schindler-Pelzl was honored by several Jewish organizations for her efforts during World War II.

Death and burial ground of Schindler and Schindler-Pelzl, Oskar and Emilie.

In May 1994, she received the Righteous Among the nations award from Yad Vashem, died old age 93, on 05-10-2005 of a stroke and is buried on the Stadtfriedhof of Waldkraiburg. Oskar is buried on the Mount Zion Catholic Cemetery. Jerusalem, Israel.