and named after his uncle James A. Roosevelt

, attended the Potomac School and the National Cathedral School in Washington, D.C., and the Groton School in Massachusetts. At Groton, he rowed and played football, as well as serving as a prefect in his senior year. After graduation in 1926, he attended Harvard University, where he rowed with the freshman and junior varsity crews. At Harvard, he followed some family traditions, joining the Signet Society and Hasty Pudding Club, of which both his father, President Franklin D. Roosevelt, and his uncle, President Theodore Roosevelt,

had been members, as well as the Fly Club, which his father had joined, and Institute of the 1770. He graduated from Harvard University in 1930 and was elected permanent treasurer of his class. 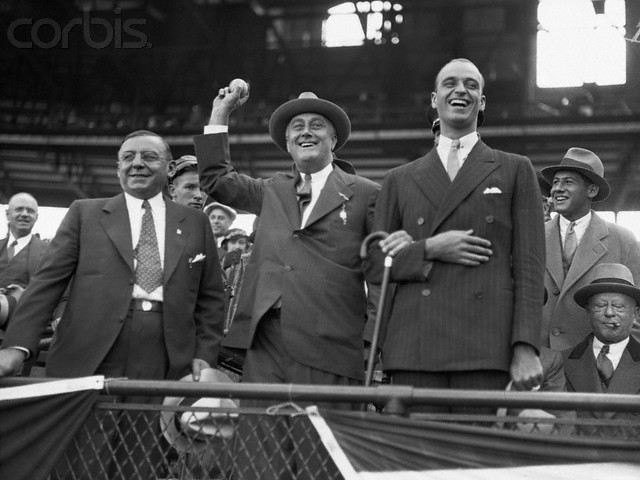 In October 1939, after World War II broke out in Europe, Roosevelt resigned the lieutenant colonel’s commission he had been given in 1936, and was commissioned as a Captain in the Marine Corps Reserves. In November 1940, he went on active duty. In early 1941, the President sent him to the Middle East as a military attaché with the British forces. He travelled extensively in the area, and observed several important campaigns. In August 1941, he joined the staff of William J. Donovan,

Coordinator of Information, with the job of working out the exchange of information with other agencies. After Japan’s Attack on Pearl Harbor, Roosevelt requested assignment to combat duty. He transferred to the Marine Raiders, the Marines’ commando force, and became second-in-command of the 2nd Raider Battalion

who Roosevelt knew when Carlson commanded the Marine Detachment at the Warm Springs, Georgia residence of Franklin Roosevelt. His influence helped win Presidential backing for the Raiders, who were opposed by Marine traditionalists. Roosevelt served with the 2nd Raiders at Midway, and in the Makin Island raid, where he earned the Navy Cross. He was given command of the new 4th Raiders

, but was invalided in February 1943. During the war, a total of 8.078 men, including 7.710 Marines and 368 sailors, were assigned to Raider units. Raiders received a total of seven Medals of Honor

and 136 Navy Crosses. He served in various staff positions during the rest of the war. In November 1943, he accompanied Army troops in the invasion of Makin, and was awarded the Silver Star by the Army. He retired from active duty in October 1945, with rank of Colonel. He continued in the Marine Corps Reserves, and retired in 1959 at the rank of Brigadier General. James suffered from having flat feet, so while other Marines were required to wear boots, he was allowed to wear sneakers. After the war, Roosevelt returned to live in California. He rejoined Roosevelt and Sargent as an executive vice president, and established the company’s office in Los Angeles. In 1946 he became chairman of the board of Roosevelt and Haines, successor to Roosevelt and Sargent. He later became president of Roosevelt and Company, Inc.

James Roosevelt died in Newport Beach, California on 13-08-1991 of complications arising from a stroke and Parkinson’s disease. He was 83 and was the last surviving child of Franklin and Eleanor Roosevelt. He is buried on the cemetery Pacific View Memorial Park.