Wife of Joachim von Ribbentrop and his greatest adviser in political businesses.

the daughter of the champagne giant Otto Henkell

and Käthe Michel, an aristocratic lady who often wearied a monocle ?. Annelies visited the Volksschule in Mainz and in 1907 the family moved to the von Beethoven street in the Wiesbaden suburb, Biebrich, in a beautiful house and Annelies always felt herself exalted about everybody. Her parents themselves by the way lived a pretty Spartan lifestyle, no waste of money was the rule. Annelies wasn’t a pretty looking girl but intelligent, full for zest of life and fun, but somewhat malicious. Her health was not the best and she needed several operations for a chronic sinusitis and inflammation. She all her life suffered from headache problems, had private school lessons, history, German and religion and was an excellent student, her teacher was her beloved Mrs. Guttmann. Her greatest interest was painting and studied for years art history in Munich. She temporary was engaged with Herman Hommel an uncle of the later NS Minister, Albert Speer

but when she in the summer of 1919 met the large blond Joachim von Ribbentrop during a tennis tournament, she was lost. The good looking Oberleutnant with sparkling blue eyes, great dancer, good dressed and gentlemen, was a real dandy 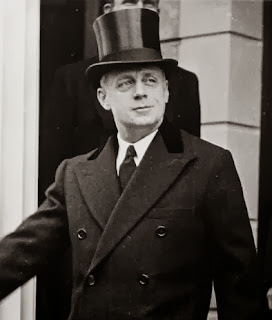 She didn’t like his view as a man of the world, but was fascinated by him, as he walked around arrogant with his English umbrella. He asked the hand of Annelies but her parents didn’t see him as the man for there Spirit’s business and tried to prevent their relation. As Annelies fanatic carried on her parents surrounded and thew marriage took place on 20-07-1920, Annelies 24 years old. Joachim Ribbentrop born 30-04-1893 in Wessel am Rhein from an old nobility family, with a father Richard Ribbentrop, with Prussian roots who, AdmiredOtto von Otto von Bismarck

As his mother already had died in 1902, his father with three children remarried Olga von Prittwitz and Gaffron and he had a carefree youth. For the meanwhile diplomat a enamoured Annelies Henkell was a piece of luck and a change of life. It was a marriage of convenience but turned in real love and he never regretted this step.

From the beginning he was under influence of Annelies who loved and very dominated him and he had to explain all his political steps. At last he was totally controlled by her and he accepted. The Ribbentrops had five children together.

The youngest was callad  “Adolf” Richard Barthold von Ribbentrop and the eldest son was Rudolf von Ribbentrop, born 20-07-1923. The younger Ribbentrop attended the Westminster School in London while his father served as Ambassador to Britain. Rudolf was not popular with the other boys and made no close friendships. One schoolmate describes him as ‘doltish, surly and arrogant’. He would arrive each morning ‘in one of two plum-coloured Mercedes-Benz limousines.

On arrival in Dean’s Yard, both chauffeurs would spring out, give the Nazi salute and shout ‘Heil Hitler!'” You can imagine how that was received among the other boys. Rudolf went on to serve with great fanatic in the Waffen-SS

, involved in many of the major campaigns on both the Eastern and western fronts. He was wounded five times and heavily decorated.

. Her parents allowed them a large house in Berlin Dahlem, Lentzeallee 7-9.

five times during the war but survived till now. He was wounded by a fragment in the upper right arm 30-05-1941, a bullet wound in left forearm 02-09-1941, a shot in his back 05-02-1943, again wounded in the back by strafing enemy fighter-bomber 03-06-1944 and by a shell fragment in Mouth 20-12-1944. As commander of I./SS-Panzer Regiment 12. He commanded this Abteilung until the Division surrendered to the Americans on 08-05-1945. The Division losses during the fighting in Normandy were severe, in the three months from June to September, 55 officers, 229 NCOs and 1.548 had been killed. A further 128 officers, 613 NCOs and 3.684 had been wounded with 58 officers, 182 NCOs and 2.012 reported missing. This was a combined total of 241 officers, 1.024 NCOs and 7.244 men. In all, the 12th SS Panzer Division Hitlerjugend suffered a total of 8,569 casualties out of a strength of 20,540 men; a casualty rate of 42%. It had also lost 94% of its armour and almost all of its artillery. Ribbentrop was meanwhile the German representative of Whiskey Concern, Johnny Walker and enlarged his emporium. They became very wealthy and lived in big style. It didn’t take long before political and foreign diplomats discovered this Ribbentrop society were they could make many interesting contacts. All these nobility people frustrated Ribbentrop and the couple realized that Ribbentrop’s aunt Gertrude a “ von Ribbentrop” was and they found an solution. They convinced aunt Gertrude to adopt cousin Joachim and on 15-05-1925 he was allowed to add the aristocratic von to his name. During most of the Weimar Republic era, Ribbentrop was apolitical and displayed no anti-Semitic prejudices. A visitor to a party thrown by Ribbentrop in 1928 recorded that Ribbentrop had no political views beyond a vague admiration for Gustav Stresemann,

he died age 51, on 03-10-1929, fear of Communism and a wish to restore the monarchy. Several Berlin Jewish businessmen who did business with Ribbentrop in the 1920s and knew him well later expressed astonishment at the vicious anti-Semitism Ribbentrop was to display in the Third Reich

, saying that they did not see any indications that he had held such views when they had known him. As a wealthy partner in the Henckel-Trocken champagne firm, Ribbentrop did business with Jewish bankers, and organized the Impegroma Importing Company (“Import und Export großer Marken”) with Jewish financing. On 18-01-1933, Hitler had the first of several secret meetings with Franz  von Papen

at Ribbentrop’s house in the exclusive Dahlem district of Berlin.

were to fall, he would abandon his demand for the Chancellorship and instead use his influence with President Paul von Hindenburg

to ensure that the Chancellorship went to Hitler Among Ribbentrop’s guests that night were Hitler; von Papen; Hermann Goering,

the politically powerful son of the President and Otto Meissner, the Presidential State Secretary. When he saw Annelies Henkell, Adolf Hitler always said there is the Iron One, “She wears the trousers” in the house of Ribbentrop. Josef Goebbels said about Ribbentrop, he bought his name, he married for the Henkell money, his position he got by swindle and the political choices were from his wife. Annelies joined the NSDAP 01-12-1932 with number 1.411.594 and was always there with all secret meetings in their house and advised her husband where possible. In April 1933 the new NS Reichskanzler came to their house to thank von Ribbentrop for his help. Annelies parents were no Nazis, not even as the Nazis abolished the Sekt tax after their victory. Von Ribbentrop became the new advisor from Hitler and the Ribbentrops had made it and no Jewish guests were invited anymore. The new guests were SS Reichsleiter, Heinrich Himmler

and his wife Magarethe and SA leader, Ernst Röhm.

Annelies followed her husband in all his foreign travels. They got five children, the third was called after his stepfather Adolf, Adolf Richard Barthold von Ribbentrop

from Dahlem, an anti Nazi, didn’t want to baptize the child and came to the concentration camp Sachsenhausen. He survived the camp and the war, he died old age 92, in Wiesbaden, on 06-03-1984.

In 1936 the von Ribbentrop;s left for London

, and stayed there till the occupation of Austria in March 1938, from this fact von Ribbentrop didn’t know anything and was again very upset. Ribbentrop, totally surprised heard the facts being with Chamberlain for a dinner. The family von Ribbentrop filled their many trunks and left for Germany in a hurry. Annelies would over Joachim have a important voice in the Pact with the Russians, but as the war with England broke out, not expected, the Ribbentrop’s had gambled their luck away. They spend the most time on their country estate Sonnenberg

and von Ribbentrop tried time and time again to tighten the relationship with Hitler but without result. When the Russians approached in April 1945 they went to Berlin, separated, Joachim stayed in Berlin and Annelies with the children could reached the Rheinland and the couple would see each other first in the prison of Nuremberg. During the process she supported her husband with reliving material, but Joachim was found guilty on all points and sentenced to death by hanging, by hangman Master sergeant, John Woods.

Annelies remained a real national socialist and was integrated in the former Dachau concentration camp, in Munich, where she wrote her memories to excuse and explained their behavior during the war. She returned to the Rheinland, was for her fortunately not “entnazifiziert” “screened” for her Nazi life and could keep all the family money. In 1953 she wrote a book `Between London and Moscow` and remained to explain all the faults to other people as her Joachim.

Annelies von Ribbentrop-Henkell, still malicious, died age 77, on 05-10-1973 in Wuppertal Ebenfeld and is buried in the Henkell family grave in Wiesbaden-Biebrich, on the the gravestone Joachim’s name. A historian in November 2015 reported that the gravestone of the Ribbentrop’s has moved from Wiesbaden to the Kommunal friedhof of Velbert-Langenberg near the grave of Ilja Ribbentrop, born von Münchhausen, the wife of SS Obersturmführer Rudolf von Ribbentrop

and Rudolf now 94 in 2015 is still alive living in the neighborhood of Velbert-Langenberg. Recently Rudolf von  Ribbentrop, here as young guy in London

Recently, 2015, also the gravestone of the family von Ribbentrop is removed and put on another spot along a path

on the Kommunal cemetery of Velbert-Langenberg.