the son of Church of Norway pastor and genealogist Jon Lauritz Qvisling (1844–1930) and his wife Anna Caroline Bang (1860–1941), the daughter of Jørgen Bang, ship-owner and at the time the richest man in the town of Grimstad in South Norway. The elder Quisling had lectured in Grimstad in the 1870s; one of his pupils was Bang, whom he married on 28-05-1886, following a long engagement. The newly-wed couple promptly moved to Fyresdal, where Vidkun and his younger siblings were born.

The family name derives from Quislinus, a Latinised name invented by Quisling’s ancestor Lauritz Ibsen Quislin (1634–1703), based on the village of Kvislemark near Slagelse, Denmark, whence he had emigrated. Having two brothers and a sister, the young Quisling was “shy and quiet but also loyal and helpful, always friendly, occasionally breaking into a warm smile.” Private letters later found by historians also indicate a warm and affectionate relationship between the family members. From 1893 to 1900, his father was a chaplain for the Strømsø borough in Drammen. Here, Vidkun went to school for the first time. He was bullied by other students at the school for his Telemark dialect, but proved a successful student. In 1900, the family moved to Skien when his father was appointed provost of the city.

In December 1918, Quisling became the Norwegian military’s expert on Russian affairs and in 1939, Quisling turned his attention towards Norway’s preparations for the anticipated European war, which he believed involved a drastic increase in the country’s defence spending to guarantee its neutrality. Meanwhile, Quisling presented lectures entitled “The Jewish problem in Norway” and supported Adolf Hitler

in what appeared to be growing future conflict. Despite condemning Kristallnacht,

he sent the German leader a fiftieth-birthday greeting thanking him for “saving Europe from Bolshevism and Jewish domination”. Quisling also contended that should an Anglo-Russian alliance make neutrality impossible, Norway would have “to go with Germany.” Invited to the country in the summer of 1939, he began a tour of a number of German and Danish cities. He was received particularly well in Germany, which promised funds to boost Nasjonal Samling’s

standing in Norway, and hence spread pro-Nazi sentiment. When war broke out on 01-09-1939, Quisling felt vindicated by both the event and the immediate superiority displayed by the German army. He remained outwardly confident that, despite its size, his party would soon become the centre of political attention

He became the Norwegian politician and officer, commonly known as one of World War II most infamous traitors. He held the office of Minister President of Norway from 01-02-1942, to the end of World War II, while the elected social democratic cabinet of Johan Nygaardsvold

was exiled in London. Quisling was tried for high treason and executed by firing squad after the war. The term “quisling” has become a synonym in many European languages, including English, for traitor. Vidkun Quisling had a mixed and relatively successful background, having achieved the rank of major in the Norwegian army (some years before he had become the country’s best ever war academy cadet upon graduation), and worked with Fridtjof Nansen

in the Soviet Union during the famine in the 1920s, as well as having served as defense minister in the agrarian government 1931-1933. He was the son of the Lutheran minister and well-known genealogist Jon Lauritz Quisling

, and both of his parents belonged to some of the oldest and most distinguished families of Telemark. On 17-05-1933, the Norwegian Constitution Day, Quisling and state attorney Johan Bernhard Hjort

formed Nasjonal Samling (NS) (“National Unity”), the Norwegian national-socialist party. Nasjonal Samling had an anti-democratic, Führerprinzip-based political structure, and Quisling was to be the party’s Führer, much like Adolf Hitler’s (did you know)

was for the NSDAP in Germany.

The party went on to have modest successes. In the election of 1933, four months after the party was formed, it garnered 27850 votes, following support from the Norwegian Farmer’s Aid Association, with which Quisling had connections from his time as a member of the Agrarian government. However, as the party line changed from a religiously rooted one to a more pro-German and anti Semetic hard line policy from 1935 on wards, the support from the Church waned and, in the 1936 elections, the party got about.50.000 votes. The party became increasingly extremist, and party membership dwindled to an estimated 2.000 members after the German invasion. When Germany invaded Norway on 09-04-1940, Quisling became the first person in history to announce a coup during a news broadcast, declaring an ad-hoc government during the confusion of the invasion, hoping that the Germans would support it. The background for this action was the flight northwards of the King and the government. Quisling had visited Adolf Hitler (see Adolf Hitler)

in Germany the year before, and was liked by Hitler, so Quisling’s belief that the Germans would back his government was not entirely unfounded. However, Quisling had little popular support, and the Quisling government lasted only five days, after which Josef Terboven was installed as Reichskommissar, the highest authority in Norway,

reporting directly to Hitler. The relationship between Quisling and Terboven was tense, although Terboven, presumably seeing an advantage in having a Norwegian in a position of power to reduce resentment in the population, named Quisling to the post of “Minister President” (as opposed to Prime Minister) in 1942, a position the self-appointed “Führer” assumed in 1943, on February 1. At the end of the war Terboven’s wife Ilse

killed their daughter Inga by strangle in bed and Terboven committed suicide on 08-05-1945, age 47 by detonating 50 kg of dynamite in a bunker on the Skaugum compound. He died, age 44 alongside the body of SS Obergruppenführer Wilhelm Rediess

, SS and Police Leader and commander of all SS troops in Norway, who had shot himself earlier.

Quisling was married with Maria, born Maria Vasilyevna Pasek/Pasetchnikova and “Definitely one of those dangerous women” said a German Nazi General in his report. Her health problems included theumatism, back problem, eye problems and depression. As she grew older, she had signs of dementia. In 1977, she was long-term hospitalized at Ulleval hospital In 1978 she was moved to a nursing home at Uranienborg where she lived until her death on 17-01-1980, age 79. They had no children.

Vidkun Quisling stayed in power until he was arrested 09-05-1945, in a mansion on Bygdøy in Oslo that he called Gimle after the place in Norse mythology where the survivors of Ragnarok were to live. Quisling, age 58, along with two other Nasjonal Samling leaders,

Albert Viljam Hagelin and Ragnar Skancke,
were convicted and executed by firing squad, on 24-10-1945.

In later days, these sentences have been controversial, since the capital punishment was reintroduced to the Norwegian legal system during the end of the war, by the exile government, to handle the post war trials.  They had no children.

The wall of one of inner buildings in the Akershus Fortress where Vidkun Quisling was executed on 24-10-1945. Vidkun Quisling is buried with his Maria Vasiljevna, in Skien, Gjerpen Cemetery, Norway. 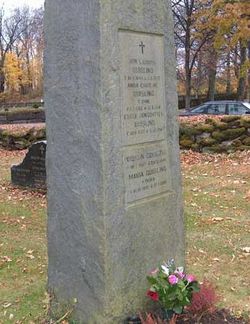 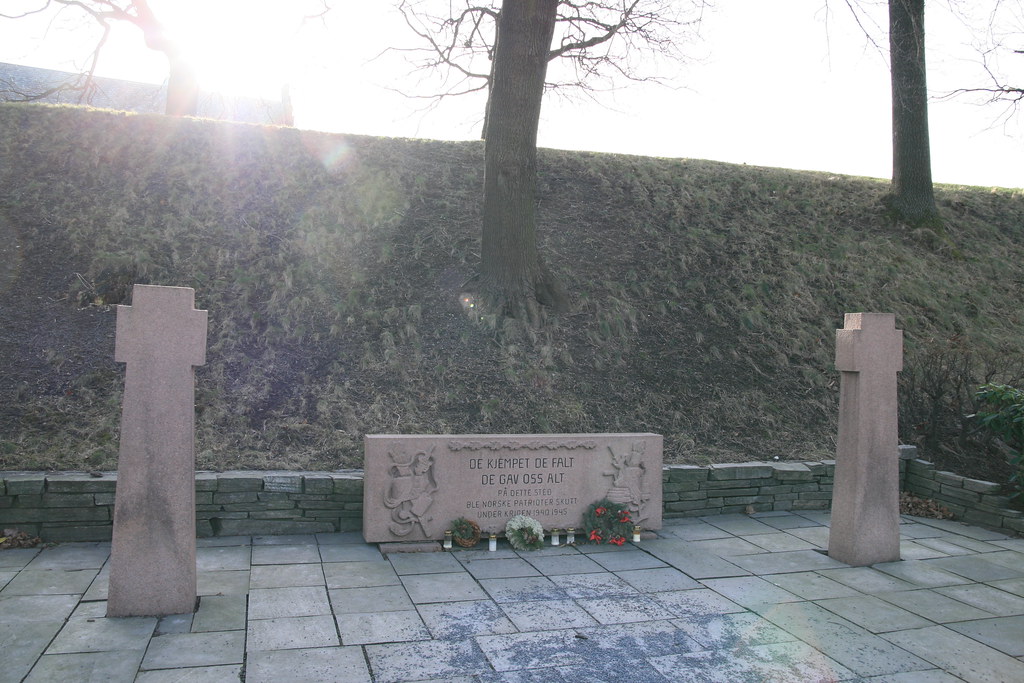 Execution place of Quisling at Akershus castle in 1945.