Parks, Floyd Lavinius, born 09-02-1896 in Louisville, Kentucky, the youngest of four children of Lyman Lewis Parks and Lizzie Pratt, born Manly. He attended the Clemson College and graduated with a Bachelor of Science degree in mechanical and electrical engineering in 1918. Parks entered the Army as a private in 1918 and was commissioned into the infantry that year. He served as a machine gun instructor with the 65th Engineers

, the US Army’s first Tank Corps unit, under the command of Captain Dwight “Ike” Eisenhower from 1918 to 1923 at Camp Colt, Pennsylvania. There, he also served as a Commanding Officer of Company A, 333rd Tank Battalion, and the Tank Corps Reserve Officers Training Camp. Parks graduated from the Army War College in 1940 and became plans and training officer of the 2nd Armored Brigade and then he served on the Staff of the 2nd Armoured Division, nickname “Hell on Wheels”

. In July 1941 he became secretary of the War Department General Staff. In March 1942, he was appointed Deputy Chief of Staff of the Army Ground Forces under Lieutenant General Lesley James McNair, later becoming its Chief of Staff. He was promoted to Brigadier General in June 1942. From May 1943 to July 1944 he was the Assistant Division Commander of the 69th Infantry Division

at Camp Shelby, Mississippi, under the command of Major General Charles Lawrence Bolte. In August 1944 he became Chief of Staff of the First Allied Airborne Army, later the U.S. First Airborne Army

, under Lieutenant General Lewis H. Brereton He was promoted to Major General in March 1945. From May to October 1945, he succeeded Brereton in command of the First Airborne Army. From July to October 1945, Parks commanded the US Sector and was Military Governor in Berlin. He represented the United States in the Kommandatura which permitted the four Allied powers to govern the city. This effectively made him the mayor of the US sector in Berlin. Parks often went golfing with President Eisenhower,

and at one time, 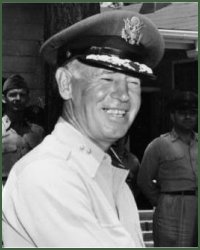 Floyd Parks scored a hole in one while playing with him. Parks died on 10-03-1959, age 63,  after a long illness at Walter Reed Army Hospital in Washington DC. Parks is buried with his wife Marie, born Applebye-Robinson, who died age 60, on 22-01-1969, in Section 30, on Arlington National Cemetery.