Lieutenant Olivier RNVR, was a pilot in the Fleet Air Army and later a famous actor.

He was cremated and his ashes interred in Poets' Corner in Westminster Abbey, London.

Olivier, Laurence Kerr “Baron Olivier”, born on 22-05-1907 in Dorking, Surrey, England, was raised in a severe, strict, and religious household, ruled over by his father, Gerard Kerr Olivier (1869–1939), a High Anglican priest whose father was Henry Arnold Olivier, a rector. Olivier took solace in the care of his mother, Agnes Louis, born Crookenden; 1871–1920, and herself the younger sister of High Anglican vicar George Pelham Crookenden, and was grief-stricken when she died (at 48) when he was only 12. Gerard Dacres “Dickie” (1904–1958) and Sybille (1901–1989) were his two older siblings. His uncle was Sydney Olivier 1st Baron Olivier. When World War II broke out, Olivier intended to join the Royal Air Force, but was still contractually obliged to other parties. He apparently disliked actors such as Charles Laughton and Cedric Hardwicke, who would hold charity cricket matches to help the war effort. Olivier took flying lessons, and racked up over 200 hours. After two years of service, he rose to the rank of Lieutenant Olivier RNVR, as a pilot in the Fleet Air Arm, but was never called to see action. In 1944 he and fellow actor Ralph Richardson 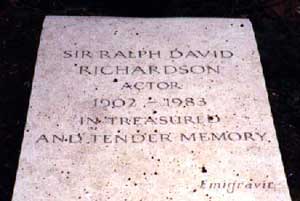 were released from their naval commitments to form a new Old Vic Theatre Company at the New Theatre with a nightly repertory of three plays, rehearsed over 10 weeks to the accompaniment of German VI “doodlebugs”. The enterprise, with John Burrell as manager, eventually extended to five acclaimed seasons ending in 1949, after a prestigious 1948 tour of Australia and New Zealand. In 1944, Olivier filmed Henry V, which—in view of the patriotic nature of the story of the English victory—was viewed as a psychological contribution to the British war effort. In 1945 Olivier and Richardson were made honorary Lieutenants with ENSA and did a six-week tour of Europe for the army, performing Arms and the Man, Peer Gynt and Richard III for the troops, followed by a visit to the Comédie Francaise in Paris, the first time a foreign company had been invited to play on its famous stage. When Olivier returned to London the populace noticed a change in him. Olivier’s only explanation was: “Maybe it’s just that I’ve got older.” A 2007 biography of Olivier, Lord Larry: The Secret Life of Laurence Olivier by Michael Munn, claims that Olivier was recruited to be an undercover agent inside the United States for the British government by film producer and M15 operative Alexander Korda on the instructions of Winston Churchill. Munn’s main source was Hollywood producer Jesse Lasky, who believed that “Larry…was drumming up support, and doing it with the British Government’s sanction”. According to an article in The Telegraph, David Niven

, a good friend of Olivier’s, is said to have told Michael Munn, “What was dangerous for his country was that (Olivier) could have been accused of being an agent. So this was a danger for Larry because he could have been arrested. And what was worse, if German agents had realized what Larry was doing, they would, I am sure, have gone after him.” 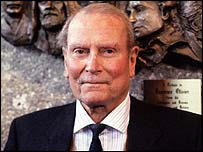 Olivier died at his home in Steyning, West Sussex, England, from renal failure, age 82 of cancer, on 11-07-1989. He was cremated and his ashes interred in Poets’ Corner in Westminster Abbey, London.