Mohnke rose to SS Brigade General and was one of Adolf Hitler's last remaining Generals. 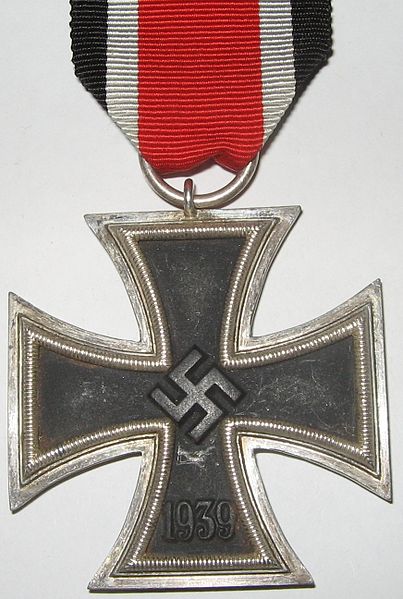 , as the son of the wheelwright, carpenter and furniture craftsman Wilhelm Gustav Adolph Mohnke (born 07-07-1877 in Conow, Kirchspilel Feldberg in Mecklenburg; he died 15-11-1926; son of the shepherd Gustav Adolph Mohnke and Wilhelmine, born Höppner) and his wife Frieda Minna Anna, born Lange, who was married on 08-03-1900 (born 07–09-1869 in Bad Doberan; 03-10-1951 in Lübeck) was born in Lübeck.  After his father’s death in 1926, he worked in a glass and porcelain factory, most recently in management. His father Wilhelm, who shared his name with his son, was a cabinetmaker.

SS-Sturmhauptführer Mohnke (residing in Lichterfelde) married his fiancée Margarete Anna Julia Henriette Emma, born Levihn, on 02-03-1934 in Lübeck. Later, probably after the war and imprisonment, Mohnke remarried. With his wife Marion he had a son Axel.

The infamous Leibstandarte eventually grew out of this SS guard.  Mohnke took part in the Polish Campaign in September, 1939. He was wounded on 07-09-1939 and recovered in the hospital in Prague. For this, Mohnke received the Wound Badge in Black

. He was one of the first to receive the Iron Cross, Second Class

, at the outset of the Battle of France in 1940. He took command of the 2nd Battalion on 28 May after the battalion commander was wounded. It was around this time that Mohnke was allegedly involved in the murder of 80 British prisoners of war (POWs) of the 48th South Midland Infantry Division

, near Wormhoudt in a barn

. Thorne died old age 85 on 25-09-1970. Mohnke was never brought to trial over these allegations and when the case was reopened in 1988, a German prosecutor came to the conclusion there was insufficient evidence to bring charges. The case briefly resurfaced once again in late 1993 when it became evident that the British government had not revealed some pertinent files from its archives during the earlier investigation. However, nothing substantial came from this either. He commanded the 2nd Battalion during the Balkans campaign, where he suffered a severe leg wound in a Yugoslavian air attack on 06-04-1941, the first day of the campaign. It was the decision of the medics that his leg would need to be amputated, but Mohnke overrode them. His wound was so grievous that they were still forced to remove part of his foot. During the eight months Mohnke, a doglover

, was recuperating, due to the severity of his injury, Mohnke was awarded the German Cross in Gold on 26-12-1941.

It was Mohnke, here with Johannes Blaskowitz

who planted the seed for the formation of the LSSAH Panzer Battalion early in 1942 after returning to active service. He appointed Ralf Tiemann as his adjutant, Tiemann died 19-05-2005, whose first official task was finding recruits. Tiemann then proceeded to compile a list, eventually with enough names to fill two companies. While the newly wed SS Oberstgruppenführer, Josef “Sepp” Dietrich

presented his new wife to his officers on 14 January, Mohnke presented the divisional commander, with his personnel list, which had in the meantime turned into transfer orders. Dietrich, who was caught unawares, finally relented to Mohnke’s pressure and signed the paper. So was born the Panzerwaffe of the Leibstandarte “Adolf Hitler” . It was not to be though, and Mohnke was relieved of his command and transferred to the replacement battalion on 16-03-1942. On 01-09-1943 16,000 new recruits of the Hitlerjugend

, under command of SS-Brigadeführer Fritz Witt

while the senior NCO’s and officers were generally veterans of the Eastern Front. Obersturmführer Mohnke was given command of the 26th SS Panzergrenadier Regiment

, which was the second regiment formed in the 12th SS Panzer Division Hitlerjugend

. Mohnke was implicated in the killing of 35 Canadian prisoners at Fontenay le Pesnel, though, he never faced a trial for any conclusion as to any query of involvement. Mohnke told author Fischer, he did have to take strong painkillers at times, such as morphine due to the severe pain in his shortened right leg, but whether these things affected his decision making process is not known. What is known is that his physical health affected his deployment. Mohnke was commander of the Leibstandarte’s replacement battalion from March 1942 till May 1943. Then being “free enough from pain”, Obersturmbannführer, Kommandeur 12 SS LSSAH, “Hitlerjugend, Kurt “Panzermeyer” Meyer

“cajoled” him into taking a command with the 12th SS Panzer Division. This led to commanding the 26th SS Panzer Grenadier Regiment on 15-09-1943. Operation Wacht am Rhein was the final major offensive and last gamble Hitler made. Mohnke, now in command of his home division, led his formation as the spearhead of the entire operation in the Ardennes.

was attached to the 1st SS Panzer Corps, the LSSAH, one of the most elite and highly trained units in the entire German military, he succeeded SS Brigadeführer, Otto Kumm

. The crisis in the Reich meant that the LSSAH had dangerously low amounts of fuel for the vehicles that they depended on to make the division a viable fighting force. On 16-12-1944 the operation began, with Mohnke designating his best colonel, Obersturmbannführer, Kommandeur SS Panzer Reg 1 “LSSAH”, Joachim “Jochen” Peiper, and his Kampfgruppe to lead the push to Antwerp.

Mohnke here with a  playful Panzermeyer. The operation formally ended on 27-01-1945, and three days later Mohnke was promoted to SS Brigadeführer. A short while later LSSAH and the 1st SS Panzer Korps’ were transferred to Hungary to bolster the crumbling situation there. Mohnke was injured in an air raid where he suffered, among other things, ear damage. He was removed from front-line service and put on the Führer reserve. After recovering from his wounds, Mohnke was personally appointed by Hitler as the Battle Commander for the defense of the centre government district, which included the Reich Chancellery and Führerbunker, Mohnke’s command post was under the Reich Chancellery in the bunkers therein. He formed Kampfgruppe Mohnke and it was divided into two weak regiments. Mohnke was responsible for the defense of the government district. Together they had an estimated 250,000 soldiers, while the Red Army with more than two million men was already at the gates of Berlin. Despite the previously hopeless mission, Mohnke defended his district tooth and nail. Even after his district was completely surrounded by the Russians, he followed Hitler’s orders never to capitulate and protracted street fighting killed huge numbers of soldiers and civilians.Although Hitler had appointed General Helmuth Weidling

as defense commandant of Berlin, Weidling died age 64 on 17-11-1955, Mohnke remained free of Weidling’s command to maintain his defense objectives of the Reich Chancellery and the Führerbunker.

While the Battle in Berlin was raging around them, Hitler ordered Mohnke to set up a military tribunal for Hermann Fegelein,

adjutant to Heinrich Himmler, in order to try the man for desertion. (see Waldemar Fegelein) Fegelein was caught by SS-Obersturmbannführer Peter Högl

Högl found Fegelein in his Berlin’s apartment on 27 April, wearing civilian clothes and preparing to flee to Sweden or Switzerland. He was carrying cash—German and foreign—and jewelry, some of which belonged to Eva Braun.

Drunken Hermann Fegelein was in no condition to stand trial, or for that matter to even stand.  I closed the proceedings…So I turned Fegelein over to SS Gruppenführer, Johannes Rattenhuber and his security squad, General Wilhelm Burgdorf

and General Hans Krebs. Wilhelm Burghof committed suicide age 50 on 02-05-1945 in the Führerbunker. Fegelein still drunk was executed age 38 on 29-04-1945 in the bunker garden. ” On 30 April, after receiving news of Hitler’s suicide, orders were issued that those who could do so were to break out. The plan was to escape from Berlin to the Allies on the western side of the Elbe or to the German Army to the North. Prior to the breakout, Mohnke briefed all commanders, who could be reached, within the Zitadelle sector about the events as to Hitler’s death and the planned break out. They split up into ten main groups. It was a “fateful moment” for Brigadeführer Mohnke as he made his way out of the Reich Chancellery on 1 May. He had been the first duty officer of the LSSAH at the building and now was leaving as the last battle commander there. Mohnke’s group included: secretary Traudl Junge-Humps,

killed, age 41, on the flight from the bunker, on 02-05-1945, SS Obersturmbannführer, Hitler’s driver Erich Kempka

and various others. Else Krüger, born 09-02-1915, was captured and interrogated in a British war camp where her British interrogation officer was Leslie James, he married Else Krüger on 23-12-1947 in Wallesey, Cheshire and after his death on 18-08-1995 in Staufen, Germany, she returned to Hamburg, Germany.

Mohnke planned to break out towards the German Army which was positioned in Prinzenallee. The group headed along the subway but their route was blocked so they went above ground and later joined hundreds of other Germans civilians and military personnel who had sought refuge at the Schultheiss-Patzenhofer Brewery on Prinzenallee. On 02-05-1945, General Weidling issued an order calling for the complete surrender of all German forces still in Berlin. Knowing they could not get through the Soviet rings, Mohnke decided to surrender to the Red Army. However, several of Mohnke’s group, including some of the SS personnel, opted to commit suicide. Some groups kept up pockets of resistance throughout the city and did not surrender until 08-05-1945. Mohnke was then handed over to the NKVD.

On 09-05-1945, he was flown to Moscow for interrogation and kept in solitary confinement for six years, after being transferred to Lubjanka Prison. Thereafter, Mohnke was transferred again to the Generals’ Prison in Woikowo. He remained in captivity until 10-10-1955, more then 10 years.

After the war, he told the following about the order to shoot Fegelein:

“Adolf Hitler ordered me to set up a tribunal that I had to chair myself. I decided that the accused (Fegelein) had the right to be tried by a high-ranking tribunal. The members were Generals Wilhelm Burgdorf, Hans Krebs, Johann Rattenhuber and myself. At that time, we intended to file a lawsuit. The tribunal took place in a room near my command post. We, the military judges, sat down at the table with the German handbook for military tribunals in front of us. When we wanted to sit down, Defendant Fegelein started to behave in such a ferocious way that the lawsuit could not take place. He was completely drunk and looked strange from his eyes. Fegelein contested the legal validity of the tribunal and continued to argue that he was only accountable to Heinrich Himmler,

and to none other than Himmler. Not even to Hitler. Refusing to defend himself, he was trembling and shivering as he constantly screamed and swore. He even took his penis out of his pants and started urinating on the floor.

Following his release by intervention of the new Chancellor, Konrad Adenauer

he worked as a dealer in small trucks and trailers, living in Barsbüttel-Hamburg. Despite a campaign, led by the British Member of Parliament Jeff Rooker

, to prosecute him for his alleged involvement in war crimes during the early part of the war, Wilhelm Mohnke was able to live out the remainder of his years in peace. He died in the coastal village of Damp, near Eckernförde in Schleswig-Holstein on 06-08-2001, at the venerable age of 90..

Mohnke is buried on the local cemetery, Am Friedhof of Rahlstedt a suburb of Hamburg.