in Baden Wurttemberg, joined the Army, age 20, as a Fahnenjunker in the Artillery and was commissioned as a Leutnant in February 1914. He served with that branch of service throughout World War I, spending most of it with the 67th Lower Saxon Feldartillerie Regiment; he won the Iron Cross Second Class

in July 1915 and the First Class in January 1916. He was promoted to Oberleutnant in April 1917, subsequently he was decorated with the Knight’s Cross of the Saxon Albert Order

. Meindl’s distinguished war record earned him a place among the 100,000 men retained in the Reichswehr of the post-war Weimar Republic. He served initially as a battery officer with the 13th Artillery Regiment, being promoted to Hauptmann in August 1924 and joining the Staff of the Wehrkreis, in Stuttgart.

Thereafter Meindl served briefly with 5th Division before being posted to the War ministry, over the next few years he held a number of staff posts, being promoted to Major in April 1934. In October 1935 he was appointed commander of Ist Artillerie Battailon Regiment 5 and was promoted to Oberstleutnant in August 1936. In November 1938, Meindl transferred to the Gebirgstruppe as commander of the 112th Gebirgsartillerie Regiment of the 3rd Gebirgs Division,

and was promoted to Oberst in April 1939. (see Adolf Hitler) On the outbreak of the war Meindl saw action during the Polish campaign. 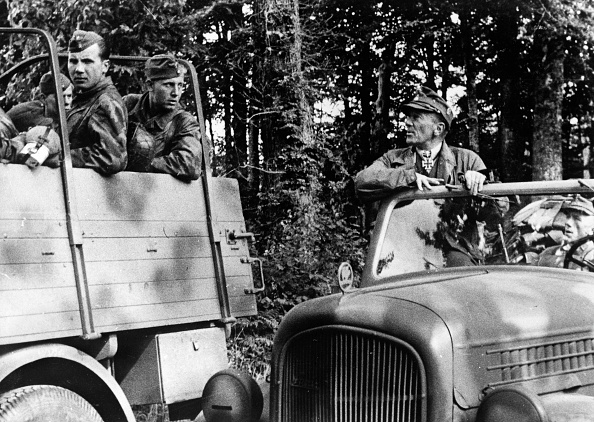 In April 1940, Generalmajor der Gebirgstruppe, Kommandeur der 3th Gebirgs Division, Eduard Dietl commander of 3rd Gebirgs Division, took 139th Gebirgsjager Regiment by sea, to seize the Norwegian port of Narvik. Meindl’s artillery regiment did not take part in this operation; but later, when things began to look desperate for Dietl’s force surrounded outside Narvik, Meindl immediately offered to jump by parachute with a relief force, despite having no jump training. After Dietl retook Narvik on 8 June, Meindl was decorated with the 1939 bar to the 1914 Iron Cross First Class and the Narvik campaign shield. On the successful conclusion of the Norwegian campaign he was placed on reserve, allocated to Wehrkreis XVIII in Salzburg, Austria. However, after a detachment to the Air Force to complete regulation parachute training, on 01-11-1940 he formally transferred from the Army to the Luftwaffe, and was promoted to Generalmajor on 01-01-1941. At the head of the Luftlande Sturmregiment, Meindl took part in the airborne invasion of Crete (see Bruno Bräuer)

in May 1941; landing near the hotly contested Maleme airfield, he was soon badly wounded

, and had to pass control of the regiment to Oberst der Fallschirmjàger, Hermann Ramcke.

In recognition of his regiment’s success on Crete, Meindl was awarded the Knight’s Cross. On recovering from his wounds, in January 1942 Meindl was sent to Russia to command scratch ground units formed from disparate Luftwaffe personnel to try to stem the Soviet winter counter-offensive. At the beleaguered town and airfield of Yukhonov the so-called Luftwaffe Kampfverband Meindl, later re titled Division Meindl, at first comprised the HQ company from his old air-landing assault regiment led by Major der Fallschirmjàger, Walther Koch, a veteran of Eben Emael

and Crete, with various other newly arrived paratroopers from 7th Flieger Division, and a motley group of Luftwaffe field units, including a ski battalion; to these were added several straggling Army and Waffen-SS units. Meindl breathed new spirit into the defense, launching attacks to clear the airfield, from which his Chief Medical Officer, the remarkable Dr. Heinrich Neumann

, who had won the Knight’s Cross in infantry combat on Crete, organized the evacuation of many neglected wounded. Neumann died very old age 97, on 19-05-2005 in Düsseldorf. In March a Soviet breakthrough saw Meindl’s men fighting north of Yukhonov, thereafter though suffering 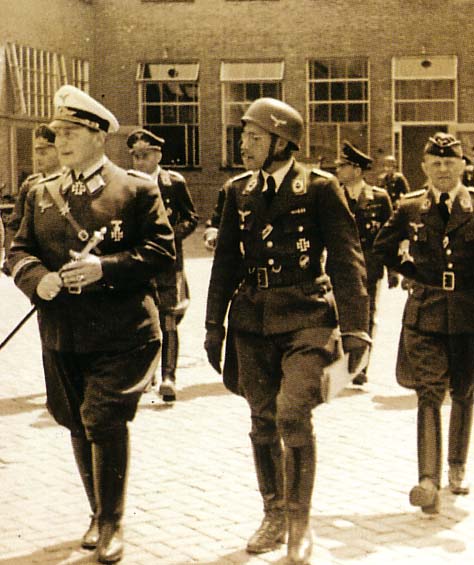 Dr. Neumann with Hermann Goering. Neumann died old age 97, on 19-05-2005.typhoid fever, he moved to Staraya-Russa to take control of newly arrived Luftwaffe field regiments, transported piecemeal from East Prussia to serve under Heeresgruppe Nord. Some of these fought to break the encirclements of German forces at Demjansk and Kholm. By June 1942, Division Meindl – with four Luftwaffe field regiments but virtually no artillery – was holding a 60-mile front between Demjansk and Kholm, in close contact with Soviet forces and harassed by strong partisan bands in almost impassable swamps. In October 1942, Meindl’s division and SS-Division Totenkopf

carried out a successful attack towards the Lovat river. That same month Meindl was appointed to command XIII Fliegerkorps based in Germany and tasked with the raising and training of no less than 22 new Luftwaffe field divisions

He was promoted to Generalleutnant in this post, which he held until June 1943; after a brief spell at the Air Ministry, in July 1943 he was appointed Inspector of Luftwaffe Field Units. Meindl returned to the Fallschirmtruppe in November 1943 when he took command of the newly formed II Fallschirmkorps

, based in occupied France under the Oberbefehlshaber West, the corps comprised 3rd and 5th Fallschirmjager Divisions.

Meindl was promoted to the rank of General der Fallschirmtruppe in April 1944. After the Normandy landings on 6 June 1944 his 3rd Fallschirmjager Division

38th Regiment, was accused of participation in the execution of two American airmen out of a group of seventy. The airmen were being held as prisoners of war and were executed in retaliation for the death of German soldiers who had been killed a few days earlier. The event occurred within the boundaries of Montmartin en Graignes in France on 17-06-1944. Erwin Schienkiewitz was tried at The General Military Court at Dachau. It addition to the aforementioned war crimes the accused was also a member of an organization declared illegal by the International Military Tribunal. Schienkiewitz was found guilty and sentenced to life in prison. After two months of bitter fighting against both US and British troops the corps was pushed eastward into the Falaise Pocket, and almost annihilated. Meindl was awarded the Oakleaves to his Knight’s Cross on 31-08-1944. After refitting and reinforcement, Meindl’s corps was back in the front line in the Netherlands in September, fighting against the Allied Operation ‘Market Garden’ as part of 1st Fallschirmarmee commanded by General der Flieger, Kurt Student

under 7th Armee. These divisions were forced to surrender in April and March 1945 respectively, in the Ruhr and near Nürnburgring; but Meindl was decorated with the Swords on 08-05-1945, the last day of the European war. After the German surrender he was taken prisoner by the British and held in captivity until September 1947.

More than 40 German divisions were destroyed during the Battle of Normandy. No exact figures are available, but historians estimate that the battle cost the German forces a total of around 450.000 men, of whom 240.000 were killed or wounded. The Allies had achieved this blow at a cost of 209.672 casualties among the ground forces, including 36.976 killed and 19.221 missing. In addition, 16.714 Allied airmen were killed or went missing in direct connection with Operation Overlord.

Eugen Meindl died at the age of 58, on 24-01-1951 in Donauschingen and is buried on the Stadtfriedhof of Donauschingen.