in Mecklenburg, on 17-12-1912. After successfully completing his high-school education, he began studying science and history at the University of Rostock.

In 1934 however, he interrupted his university studies and joined the SS Verfügungstruppe, SS Dispositional Troops,

becoming one of the first ever graduates of the new SS Junkerschule in Bad Tölz.

After his graduation he was assigned to SS-Standarte Germania, Das Reich and up until the outset of World War II, Klingenberg served on an inspection team of the SS Vt. Promoted to SS-Untersturmführer

Two weeks later, on 12-01-1945,  he was ordered to take command of the 17th Panzer Grenadier Division Götz von Berlichingen.

who died age 62 on 01-02-1961 in Lünen, defending the area between Neustadt and Landau, southeast of Saarbrücken against the XV Corps, under Wade H  Haislip,

of the U.S Seventh Army

Max Simons died age 62 on 01-02-1962 in Lünen, no grave to find there. XIII SS Army Corps was formed August 1944 at Breslau. It was moved to France and the Western Front. By the end of April 1945, some XIII Corps operated in Czechoslovakia where they encountered the U.S. 97th Infantry Division, nickname “Trident” who died very old age 96, on 24-10-1990 ). 97th Infantry Division was credited with firing the last official shot in the European Theater of Operations during World War II. This shot was fired by PFC Domenic Mozzetta

of Company B, 387th Infantry Regiment, 97th Division, at a German sniper near Klenovice, Czechoslovakia shortly before midnight, 07-05-1945. Mozzetta died age 76, in 2001 in Long Island. Others fought north of the Danube River near Regen. On 23 April elements of the 97th, together with members of the 90th Infantry Division, nicknamed “Tough Ombres”

The divison took a 48.796 as prisoners of war. The consummate SS man, Klingenberg was fairly tall, standing over 6 feet 4 inches (1.93 m). A photograph taken at Klingenberg’s Knight’s Cross presentation ceremony at the Berghof in 1941 shows him standing with Hitler. Klingenberg was apparently tall enough that, according to an aide to photographer Heinrich Hoffmann,

Klingenberg was asked by Hoffmann to stand to the side and slightly behind Hitler so as to not dwarf the Führer, who stood about 5 feet 9 inches (1.75 m). The disparity, however, can still be clearly seen in the photograph 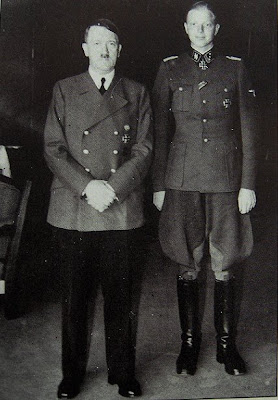 When resistance finally collapsed on 22-03-1945, age 32, Fritz Klingenberg was among the casualties. He had died leading his division near Herxheim and is buried at the German War Cemetery in Andilly, France. Jerome Rouille from France was so kind to sent me the grave picture.