SS Obersturmführer, The head of German police and security services in Rome.

Son of the chief accountant Ernst Kappler and his wife Paola, born Käs. During his childhood, Kappler grew up in the dysfunctional and volatile years of post-World War I and came of age in the Weimar Republic

during the 1920s. Kappler attended four years of grammar school, followed by four more of high school and graduated in 1925. He next attended a technical college and spent seven semesters studying electrical engineering. By 1929, he was a certified electrician, still living in Stuttgart. Kappler was a witness to the chaos of the Great Depression, the expansion of the Freikorps

, and the rise of the Nazi Party

member. Herbert Kappler joined the Nazi Party on 01-08-1931 at the age of 23. At the same time, he became a storm trooper in the Sturmabteilung (SA)

and served as an SA-Mann from 01-08-1931 to 01-12-1932. His Nazi Party membership number was 594,899. Upon leaving the SA, Kappler was accepted as a prospective candidate into the Schutzstaffel (SS). He underwent six months of indoctrination training, and was sworn into the SS

on 0-05-1933. During Kappler’s probationary period, Adolf Hitler became Chancellor of Germany in January 1933, meaning that Kappler did not have the “honor” of full SS membership prior to the Nazis’ assumption of power. Even so, due to his membership in the SA and Nazi Party dating from 1931, Kappler was considered an Alter Kämpfer, Old Comrads

and awarded the Honour Chevron for the Old Guard

Herbert Kappler was also in Stuttgart during the Night of the Long Knives,

but was at this time too junior in the SS to significantly participate. Towards the end of 1934, on September 29, he married Leonore Janns

who was the same age as Kappler, 27 at the time and came from the city of Heilbronn. Kappler performed active training duty over three separate periods from June 1935 to September 1936, with final release on 27-09-1936 with the rank of Feldwebel der Reserve. Kappler was never discharged and technically held this rank during World War II, although by that time Kappler was an active full time SS member and exempt from further military service. Kappler was also never affiliated with the Waffen-SS  and spent the war performing “behind the lines” police and security duty. In mid 1935, Kappler applied for transfer to the full time SS and submitted an application to join the Sicherheitspolizei, Security Police or SiPo. In January 1936, he was promoted to the rank of SS-Scharfführer

and assigned to duty at the Gestapo main office of Stuttgart. Over the next year, Kappler began to be noticed by his superiors and was introduced to Gestapo leader, Reinhard Heydrich, although some sources state Kappler knew Heydrich for some time before. Upon the outbreak of World War II, in September 1939, Kappler was serving as an SS-Hauptsturmführer

, out of the Stuttgart Gestapo main office. From 1939 to 1940, he was briefly deployed to Poland and participated in various Einsatzgruppen actions before serving a further tour as a uniformed Gestapo officer in occupied Belgium where he acted to suppress resistance. In 1942, after the implementation of “Final Solution” directives resulting from the Wannsee Conference, with Reinard Heydrich

Kappler began to coordinate Jewish round-ups and deportations to death camps in eastern Europe. In mid 1941, now an SS-Major, Kappler was selected as a liaison officer to the government of Benito Mussolini

as well as a security adviser to the Fascist police. His appointment to Italy was the result of his security police experience, connections with the SS leadership, as well as a fluency in the Italian language. Following the armistice between Italy and the Allied Forces on 08-09-1943, the German military occupied Rome and Kappler was ordered to serve as the Chief of the Security Police and Security Service for all SS and police units deployed in Rome. He was promoted to SS-Obersturmbannführer September 12 and quickly assumed his new duties operating out of the Italian capital. Kappler’s first action as head of German security forces in Rome was to help plan the rescue of Benito Mussolini by the SS special forces, a feat which was accomplished by SS Obersturmbannführer

Kappler was next entrusted with Jewish roundups for transportation to Auschwitz; 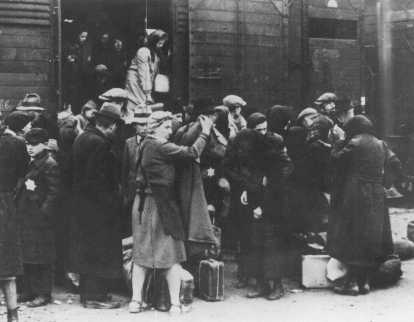 in his first action, 1,007 Italian Jews were deported with only 16 surviving, and Kappler would later arrange the deportation of a further ten thousand Roman Jews, nearly all of whom would eventually perish in Nazi gas chambers. SS Hauptsturmführer, Josef Mengele

infamous for performing human experiments on camp inmates in Auschwitz, including children, for which Mengele was called the “Angel of Death”. As the Allied armies invaded Italy and began moving north towards Rome, Kappler became significantly involved in hunting suspected Allied agents and Allied prisoners-of-war which had escaped Italian POW camps after the Italian Army capitulated. In these measures, Kappler came into direct conflict with the Vatican, which was highly suspected of harboring Allied fugitives and escaped prisoners, even though the Vatican under Pope Pius XII

was technically neutral. A particular adversary of Kappler’s in this respect was Monsignor Hugh O’Flaherty,

he died age 65 of a stroke, on 30-10-1963, whose activities helping Jewish fugitives and Allied prisoners escape Rome led to Kappler having him targeted for assassination. Paradoxically, after the war Kappler and O’Flaherty would become friends of sorts. One of the most notorious actions Kappler undertook while in Rome was the organization of the Ardeatine massacre where over three hundred Italian civilians were killed on 24-03-1944 in collective punishment for an attack by resistance fighters against an SS formation in Rome. As Rome fell to Allied forces, Kappler unsuccessfully tried to seek refuge in the Vatican, but he was arrested by British authorities in 1945

and later turned over to the Italian government in 1947. Kappler’s second in command in Rome, SS-Captain

Erich Priebke did manage to escape and it was not until 1996 that Priebke would face justice. In 1947, Kappler was tried by an Italian military tribunal and sentenced to life imprisonment in the military prison of Gaeta. Kappler and his first wife divorced while Kappler was serving his sentence, but he was married again to Anneliese Kappler, a nurse who had carried on a lengthy correspondence with Kappler before marrying him in a prison wedding ceremony in 1972. By this time Kappler had also converted to Catholicism, partly due to the influence of his war-time opponent, the Vatican diplomat Mgr. Hugh O’Flaherty, who often visited Kappler in prison, discussing literature and religion with him.

After the war Kappler lived in house 318 on Via Salaria in Rome with his first wife Leonore Wilhelmine “Minna”, née Janns (born 05-02-1907 in Heilbronn), whom he married on 29-09-1934. Since the marriage had remained childless, the couple adopted a boy from a Lebensborn home. On 19-04-1972, he married Anneliese Viktoria Wenger (born 1925), a homeopath and mother of three already grown children from a first marriage

divorced in 1955 (including Eckehard and Ekkehard Walther, who was with her in Rome) In 1962, after hearing about Kappler’s fate from a patient for the first time, she wrote to him and sent food parcels. In 1968 she visited him for the first time in the fortress of Gaeta.

By 1975, at the age of sixty-eight, Kappler was diagnosed with terminal cancer and he was moved to a military hospital in Rome in 1976.

Appeals by both his wife and the West German government to release him were denied by Italian authorities. Because of Kappler’s deteriorating condition and his wife’s nursing skills, Anneliese Kappler had been allowed almost unlimited access to him during his time in the Italian hospital. On a prison visit in August 1977, Kappler’s wife carried him out in a large suitcase, Kappler, a chain smoker, weighed less than 105 pounds at the time and escaped to West Germany, assisted by apparently unwitting carabinieri.

The Italians unsuccessfully demanded that Kappler be returned, but the West Germany authorities refused to extradite him and did not prosecute Kappler for any further war crimes, reportedly due to his ill health. Kappler died on 09-02-1978, at home in Soltau at the age of 70.

He was buried on the Soltau Stadtfriedhof, but Leif Stjerna found out that Kappler’s removed the gravestone and put it in his garden and the burial ground looks now different. .