On the ground of the former Luftwaffe headquarter, Camp Robinson, in Goldop, Poland and there is a remembrance stone in Berlin, Stadtische Friedhof Steglitz, next to the grave of Günther Korten.

the son of the Gymnasialdirektors Friedrich Jeschonnek and his wife Anny Jeschonnek, born Gardiewski. His brother was the later Vice Admiral Gert Gustav Paul Jeschonnek

born 30-10-1912 in Liegnez,  who was a Korvettenkapitän in WWII. Gert Jeschonnek later married Elisabeth “Babeth” Crüsemann, and they had four children. Following World War II, Gert became commander (Inspector of the Navy) of the post-war German Navy under chancellor Willy Brandt.

Vice Admiral Gert Jeschonnek died old age 86 on 18-04-1999 in Bonn .
Hans Jechonnek during the war showed early promise, finishing first in his class at the Kriegsakademie, War Academy. During the First World War he served in the infantry before joining the German Air Force in 1917. He excelled in his new role, becoming an air fighter, something he had in common with many senor figures in the Luftwaffe. Jeschonnek shot down only two enemy aircrafts while flying with Jasta 40.

The first one is an R.E.8 from Squadron 6 at 15:50, Jun 11, 1918 in Vlamertinghe. The second one is an aircraft from Squadron 47 that was shot down on Oct 8. During the Weimar period Jeschonnek served in the air planning staff within the Reichswher and in 1933 he joined the infant Luftwaffe of Hermann Goering (did you know), serving on the staff of Air Minister, Generalfeldmarschall der Flieger,

Erhard Milch, one of the few high ranking Jews in the Wehrmacht. In 1937 Jeschonnek became Chief of Operations of the Luftwaffe.

During 1938 he shared the common Luftwaffe enthusiasm for the dive bomber which had emerged from the successes of the Ju 87 Stuka in Spain. He was partly responsible for the decision to make both the Ju 88 and He 177 capable of acting as dive-bombers, a decision that delayed both aircraft and made them heavier than they needed to be. Jeschonnek was partly responsible for the ‘Concentrated Aircraft Procurement Programme’ of 07-11-1938, which called for a big expansion of the Luftwaffe’s bomber forced, based on the Ju 88 and He 177, two aircraft that had not yet entered service. On 01-02-1939 Jeschonnek was appointed Chief of the Luftwaffe General Staff, replacing Generaloberst der Infanterie, Hans-Jürgen Stumpff.

Although he was hard working and a gifted administrator, he was seen by many as being too young and lacking in experience to carry the burden of this new post, especially as the war began to turn against Germany. He was often arrogant, and had several bitter run-ins with Milch. He was also generally uninterested in non-operational issues, including the design and production of new aircraft, and thus has to take some of the blame for the Luftwaffe’s later shortage of aircraft, Hitler also has to take some of the blame, giving aircraft production fifth priority for raw materials during 1940.

Jeschonnek was one of many senior German commanders to fall under Hitler’s spell, believing him to be the ‘greatest commander in history’. As a result he tended to implement Hitler’s decisions without giving them enough thought. In August 1939 Jeschonnek played a part in the decision to put most developmental effort into the He 177, Me 210 and Ju 88. Of these aircraft only the third was a success, and this decision helps explain why the Luftwaffe had to fight the air battles of 1943 with similar aircraft to those of 1940. Jeschonnek was responsible for much of the German planning for the Battle of Britain (see Bomber Harris)

and the Blitz, but he doesn’t appear to have any great enthusiasm for these purely air battles, responding to news of the upcoming invasion of the Soviet Union by saying ‘At last, a proper war!’ Even after the invasion began he was still not interested in long-term aircraft production, responding to an attempt to increase fighter production in March 1942 by saying ‘I do not know what I should do with more than 360 fighters!’ , presumably referring to month production, as the Luftwaffe has used much larger fighter forces during the Battle of Britain.

Three months later, with the Soviet Air Force proving to have more staying power than he had believed Jeschonnek had changed his tune, and was calling for fighter production to reach 900 aircraft per month by the winter of 1943-44. Even this would have been too little too late. Jeschonnek agreed to the Stalingrad airlift without making any effort to examine its long term impact on the Luftwaffe. As a result a large number of instructors were taken from the training schools to help the transport aircraft navigate to Stalingrad. The Luftwaffe lost 495 transport aircraft, including hastily converted bombers, during the failed air lift, and with them a large number of the irreplaceable instructors. As a result when the level of fighter production increased dramatically under Armament Minister, Albert Speer

there weren’t the trained pilots to take advantage. As the Luftwaffe came under increasing pressure in 1942 and the first half of 1943 Jeschonnek was made a scapegoat by both Hermann Goering (see Leutnant Peter Goering)

His morale began to crack under the strain, and in the summer of 1943 would snap. In July the Luftwaffe lost 911 aircraft on the Eastern Front alone, most of them during the unsuccessful battle of Kursk. Allied bombing was also becoming more serious, with the RAF operating at night and increasingly powerful American forces attacking during the day. The final blows to Jeschonnek’s morale came in August. 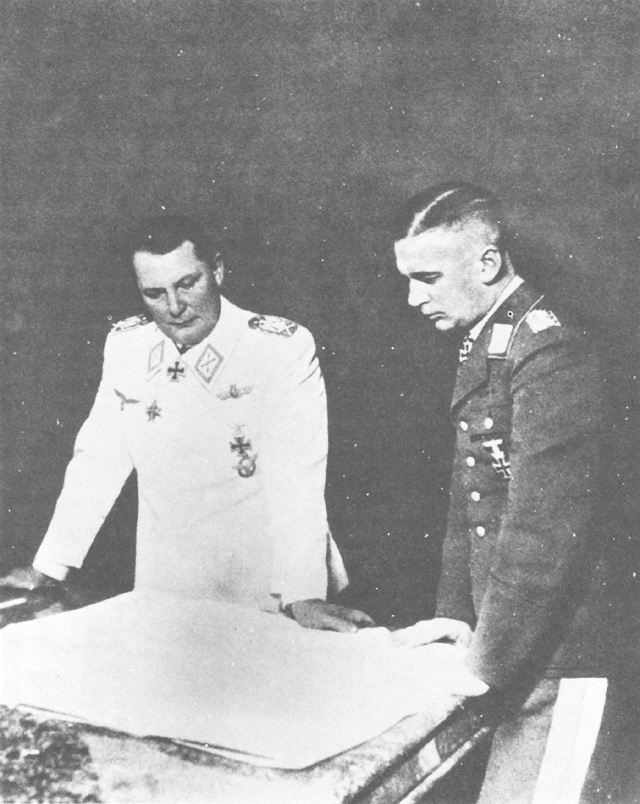 On 17 August the US Eighth Air Force

bombed Regensburg and Schweinfurt. Total American Air Force losses worldwide during World War II: 27.694 aircraft, including 8.314 heavy bombers, 1.623 medium and light bombers, and 8.481 fighters as destroyed in combat. Although the Americans suffered heavy losses during these raids, it was a depressing sign of the Ally’s ability to attack targets deep inside Germany. Things got worse that night (17-18 August) when RAF Bomber Command

hit the research base at Peenemünde on the Baltic. Jeschonnek was directly involved in the failure to stop this second raid , he was taken in by a feint made towards Berlin by 20 Mosquitoes and ordered the Berlin gun defences to open fire, threatening the 148 German night fighters over the city. At 8 am on 18 August Jeschonnek received a phone call informing him of the raid on Peenemünde. After writing a number of suicide notes, including one stating that he could no longer work with Goering (see Goering-Fock

and another asking that he attend his funeral, Jeschonnek shot himself in the head, 18-08-1944 in the former Luftwaffe Camp Robinson in Goldop, Poland, now ruins.

True to form Goering (see Goering-Sonnemann) ignored this request, instead acting as Hitler’s representative at the funeral.

Jeschonnek is buried, age 44, on the ground of the former Luftwaffe headquarter, Camp Robinson, in Goldop, Poland next to the Golddoper Sea and there is a remembrance stone on the Cemetery Steglitz in Berlin next the grave of his successor Generaloberst Günther Korten,

who died in the Wolfschanze bomb attack on Hitler July 20 1944. Close by also the grave of Generalmajor der Artillerie, Waffen Inspektor Östliche Gebieten, Rudolf Jansen. Wolfgang Linke from Frankfurt am Main visited the former camp, found the grave and kindly sent me the grave pictures and the ruins pictures of Camp Robinson.

Jeschonneck’s nephew Doug Campbell from Michigan, USA is now the owner of Jeschonnek’s dress dagger, and sent me the information about his grandfather Gert Jeschonnek the WWII Korvettenkapitän.