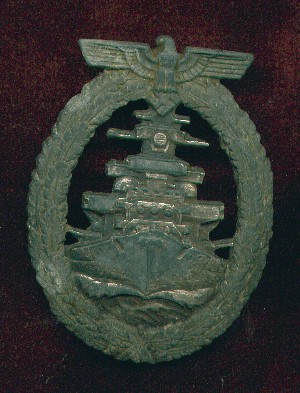 Hellmuth graduated from high school in Berlin, Gauleiter Josef Goebbels (did you know) in early 1914 and immediately joined the Imperial Navy.

After graduating from high school in 1914, Hellmuth became a naval officer and was in command of a training ship at the end of the First World War. In the Reichsmarine, he was active in the Admiral’s staff (naval war history department), the Reichswehr Ministry and as torpedo boats, semi-flotilla and flotilla chief. From 1934-1939 he belonged to the Operations Department of the High Command of the Navy (OKM) and in April 1939 became the commander of the heavy cruiser Admiral Hipper,

which he also commanded during the Norwegian campaign. From September 1940 to April 1944, he worked as Chief of Staff at the Commander Security West, at the Marine Group Command South and Marine Group Command North (Knight’s Cross of the EK 1941). While taking his ship to Trondheim in April 1940 to land invasion troops there, Operation Weserübung, General Nikolaus Falkenhorst

he encountered the British destroyer HMS Glowworm and sank it.

Heye sent a message to the British Admiralty through the Red Cross praising the gallantry of Glowworm‘s commander and crew, and this contributed to Lieutenant Commander Gerard Roope,

of World War II. Lieutenant-Commander Gerard Broadmead Roope VC RN was a posthumous British recipient of the Victoria Cross, the highest and most prestigious award for gallantry in the face of the enemy that can be awarded to British and Commonwealth forces. Being a 35-year-old Royal Navy commanding officer, his action was the first awarded a Victoria Cross in the Second World War, although the award was gazetted after the hostilities, and he is one of very few to have the award justified, in part, by a recommendation and supporting evidence provided by the enemy. In 1941 Heye was promoted to Vice Admiral, and from September to November 1942 he was commanding admiral of the German naval forces in the Black Sea. From April 1944 onward he was commanding admiral of the small naval combat forces, which included mini-submarines, combat divers, etc. He received the Knight’s Cross of the Iron Cross on 18-01-1941.

In the five and a half years of the war, German shipyards built 1.156 U-boats, of which 784 were lost from enemy action or other causes. Their toll of enemy shipping was 2.603 merchant ships of over 13½ million tons, and 175 naval vessels of all types. In terms of human lives, 28.000 German U-boat crew of the total 40.900 men recruited into the service lost their lives and 5.000 were taken prisoners of war. Some 30.000 men of the allied merchant service died, in addition to an unknown number of Allied naval personnel. When the war ended, 156 U-boats surrendered, 221 were scuttled by their own crews and two escaped to Argentina. After the war Heye published a number of works on naval strategy, history and warfare. He subsequently advised the German government on issues concerning the establishment and organization of a new military. In 1953 he joined the centrist party CDU, Christian Democratic Union of Chancellor Konrad Adenauer

and represented this party in the Federal Parliament  from 1953 to 1961, elected for the district of Wilhelmshaven-Friesland. On 08-11-1961 the Bundestag elected him unanimously as its Ombudsman for the Military. In the autumn of 1964, Heye published a series of articles in a German news journal, warning of a risk of the German military once again drifting into isolation from society at large. This triggered a vigorous and sharply worded debate between him and the ministry of defense. Frustrated by what he perceived to be inadequate support from Parliament, Heye resigned his position on 10-11-1964.