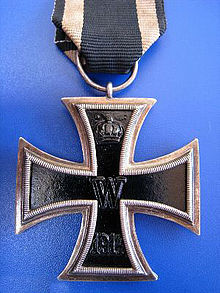 the son of a physician. There

, family weapon. He joined the Imperial Army in August 1914 and was commissioned as a leutnant, in the Grand Duchy of Hesse 1st Life Guards Regiment of the 115th Infantry.

He served in this regiment through most of World War I. Later he served in the Fifth Lower Silesian Regiment of the 154th Infantry, and remained in that unit until 09-11-1918, the end of the war. During his service he was awarded the Iron Cross First

and Second Class. Between 1 March and 01-10-1919 he was a volunteer in the Hanoverian Freikorps

and then joined the Reichswehr. He is the cousin of the SS-Brigadeführer and Generalmajor in the police Eberhard Herf

in North Africa, on the Tobruk front. He was promoted to Oberst, colonel and commanded “Kampfgruppe von Herff”. In Mai 1942 Tobruk was captured, after two weeks battle during Operation Theseus. The English defenders surrendered on 21-06-1942. 32.000 Allied soldiers were imprisoned and about 5.000 tons Supply material and 10.000 tons of fuel confiscated. Rommel was awarded with the title General Field Marshal as result. After heavy battles of El Alamein in Septemer 1942 the Germans had to leave Tobruk finally. For his service in North Africa he was awarded the Knight’s Cross of the Iron Cross in June 1941.

At the suggestion of SS Obergruppenführer, Karl Wolff

and observed the destroying of the Warsaw Ghetto from the troops of General of the Police, Jurgen Stroop,

, 31-10-1935 – 02-07-2012, a Holocaust survivor, known as possibly being the boy in the famous photograph of the Warsaw Ghetto. Nussbaum’s parents immigrated to The British Mandate of Palestine in 1935. However, they found life too difficult there, and so returned in 1939 to Sandomierz in Poland. After the German invasion of Poland in September 1939 Nussbaum’s mother and father were murdered before the Jews of the region were sent to various German Nazi concentration camps. Tsvi’s brother disappeared, never to be seen again. Shortly thereafter Tsvi, his aunt and uncle along with his first cousins’ Aaron and Mark Nussbaum and their mother Regina moved to Warsaw and, posing as gentiles, lived there for over a year. When caught, they were deported to the concentration camp at Bergen Belsen, where also Anne Frank and her sister Margot  and there mother would die.

Herff was captured by British forces in 1945, and held at Grizedale POW camp in Scotland. He suffered a stroke and died at nearby Conishead Priory Military Hospital, age 52, on 06-09-1945. He was reburied at Cannock Chase German war cemetery, Staffordshire. Generalfeldmarschall, Ernst Busch,

died also in captivity and is buried on this cemetery. Also buried here the commander of the 55th Jagdgeschwader, Oberst Alois Stoeckl.