A German jurist, brother of Werner, von Staufenberg's adjudant, and member of the German Resistance against Adolf Hitler.

His body is lost or destroyed and their is a Ehrengrab (Kenotaph) on the gravestone with his wife Barbara on the St. Annen-Kirchhof in Berlin-Dahlem.

.
Werner worked for a bank in Hamburg until the outbreak of World War II, when he joined the German army. Werner who was three younger then his brothet Hans Bernd von Haeften, and their elder sister, grew up in a liberal conservative atmosphere at home, where well-known scholars were regular visitors. Some of the people the Haeften brothers met when they were young later became their comrades in the resistance. Hans Bernd von Haeften began studying legal science in Berlin and Munich in 1924. After his final law examination in 1928 he spent a year in England as an exchange student. From 1930 to 1933 he was managing director of the Stresemann Foundation.

At that time he established initial contacts with the ecumenical movement of the European Churches. In 1933 he joined the Foreign Service; even as a diplomat he consistently refused to join the National Socialist Party (NSDAP). Haeften was one of the most important confidants in the Foreign Office for the conspirators around Claus Schenk Graf von Stauffenberg.

A close friend of Adam von Trott zu Solz, a German lawyer and diplomat who was involved in the conservative resistance to Nazism.

, Haeften was also a member of the Kreisau Circle and was designated as an undersecretary of state in the Foreign Office in the event of a successful coup against Hitler. Adam von Trott zu Solz sentenced to death on 15-08-1944 by the Volksgerichtshof, People Court, under jurist Roland Freisler,

he was hanged in Berlin’s Plötzensee Prison on 26 August, age 35.

After the failure of the coup attempt of July 20, 1944, Hans Bernd von Haeften was able to get away from Berlin, but returned to the city on July 22. The Gestapo

arrested him the next day. He was sentenced to death by the People’s Court on August 15, 1944, age 38 and also murdered only hours later in

Berlin-Plötzensee.
His body is lost or destroyed and their is a Ehrengrab (Kenotaph) on the gravestone of his wife Barbara on the St. Annen-Kirchhof in Berlin-Dahlem. 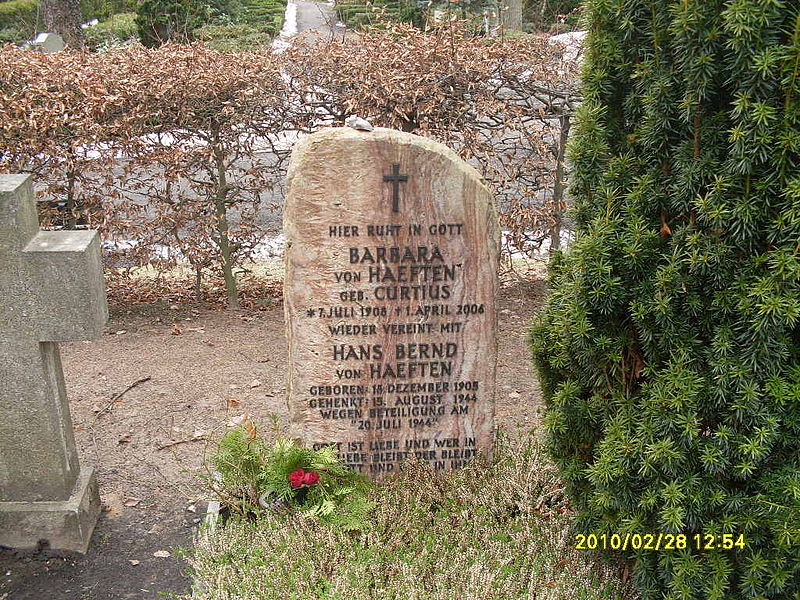