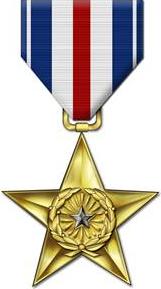 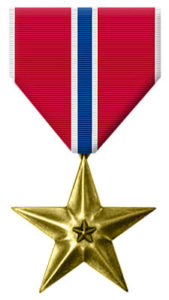 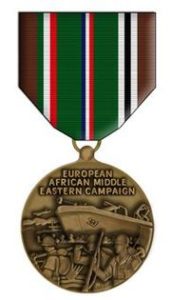 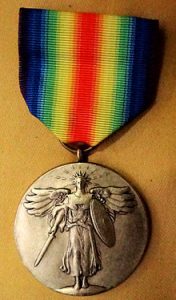 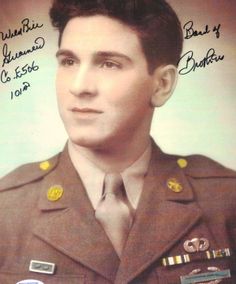 Guarnere, William Joseph ”Wild Bill”  born, 28-04-1922 in South Philadelphia, Pennsylvania, to Italian parents Joseph and Augusta Guarnere, with ten other siblings. He attended Citizens Military Training Camp for three summers, which took 4 years to complete. His mother had lied to the owners that Guarnere 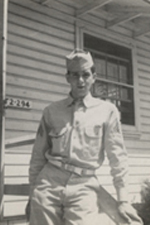 was 17, when he was actually 15. It was cancelled when war broke out in Europe.

After the bombing of Pearl Harbour, 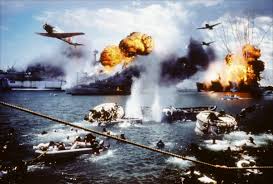 he found work as a Sherman Tank maker, at Baldwin Locomotive Works. However, his mom wasn’t happy that he hadn’t finished High School, since none of his other siblings did, so he returned, and graduated from South Philadelphia High School in 1942.

He enlisted in the U.S. Army in August 31, and was put in Easy Company, 2nd Battalion

, and was put in the Mortar Squad of 2nd Platoon. 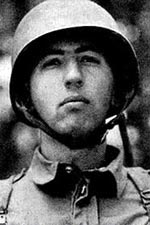 He was known to be strict and earned the hatred of many of his men. However, because of the intense training he gave his men, he was credited with creating the finest company in the 506th  Sobel died due to malnutrtion age 75 on 30-09-1987 in Waukegan, Illinois. After training at Camp Mackall, the 101st went to Aldbourne, England to await their next mission. 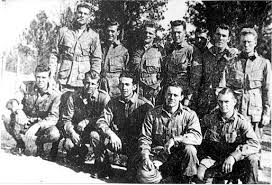 On their way, Guarnere revealed that he thought that Richard “Dick” Winters 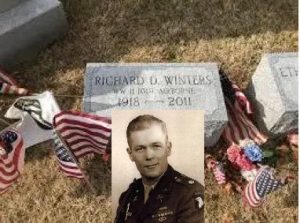 was a Quaker, just because he wasn’t Catholic. “Neither is Sobel,” said Donald Malarkey.

“Heh, that prick’s a son of Abraham,” Guarnere replied.

Joseph D “Joe” Liebgott  overheard, and asked what he said. “He’s a Jew,” Guarnere merely replied. That evidently got Liebgott mad because he was a Jew, and everyone hates Sobel that anything could be meant as an insult. At Aldbourne, Guarnere was among the NCOs to rebel against Sobel, saying “I will not follow that man into combat.” He was given hell by Colonel Robert F. Sink,

In Upottery, England, the night before the invasion of Normandy, Guarnere found out his brother was killed at Monte Casino, battles in Italy. This gave Guarnere a desire for revenge. He made a parachute drop on D-day, was separated from his company, and later successfully regrouped with the rest of the company. They encountered a German patrol, and ambushed it. 1st Lieutenant Richard Winters ordered a cease fire, but Guarnere continued to fire his Thompson SMG, killing the remaining Germans. He was chewed out by Winters: “When I say wait for my command, you wait for my command!” Winters said. As Winters walked away, Guarnere muttered, “Fine Quaker.” As they prepared to leave, one man, John Hall

from Able Company asked Donald Malarkey what Guarnere’s problem was. Guarnere overheard, and snarled, “None of ya fucking business cowboy!” Guarnere participated in the Brecourt Manor Assault, and fought at Carentan.

After heading back to Aldbourne, Guarnere decided to chat with some Easy Company replacements in his platoon. As he sat down, a replacement called Private Hashey told him that seat was saved for Private Edward Heffron. “Really? I don’t care if it’s fucking Eisenhower‘s,” 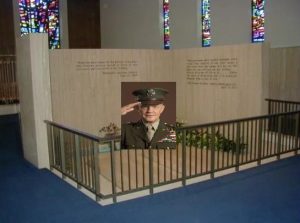 Guarnere replied. He then told them a joke about his friend for life, Edward Heffron 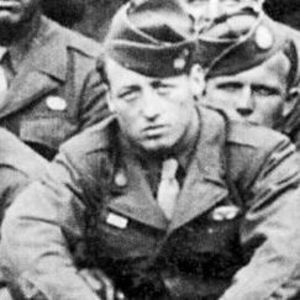 Edward Heffron died on 01-12-2013 at Kennedy Hospital in Stratford, New Yersey, as old as his friend Guarnere. 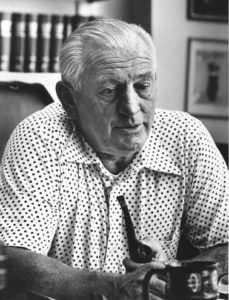 to safety at the town of Nuenen. Compton died also age 90 on 25-02-2012 in  Burlington, his is cremated.. Bill later gathered a group of men to attempt to find the missing Sergeant Denver “Bull” Randleman 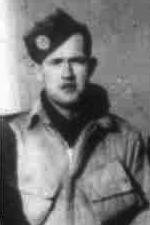 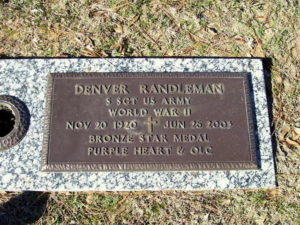 . They found him, and Guarnere said, “I don’t know whether to slap ya, kiss ya, or salute ya. I told these scalawags you was okay.” According to former Easy Company commanding officer, Major Richard Winters, Bull was one of the best soldiers he ever had. He died age 82 on 26-06-2003 in Texearkana.

Guarnere was wounded in mid-October 1944, while Easy Company was securing the line on “The Island” in the Netherlands on the south side of the Rhine. As the sergeant of Second Platoon, he had to go up and down the line to check on and encourage his men, who were spread out over a distance of about a mile. While driving a motorcycle that he had stolen from a Dutch farmer across an open field, he was shot in the right leg by a sniper. The impact knocked him off the motorcycle, fractured his right tibia, and lodged some shrapnel in his right buttock. He was sent back to England on 17 October.

He returned to Easy Company, was again made Staff Sergeant, and fought at the Battle of the Bulge. At Bastogne, Guarnere claimed that because of the cold, he was “pissing needles.” During a German bombardment, Joe Toye 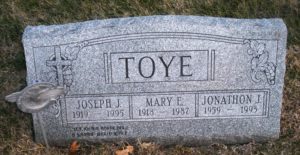 had his leg blasted off, and Bill tried dragging him to safety, only to have his leg mangled in another shell attack. As they were taking him away, he said to Joe Toye as they were bandaging him up, “I told you I’d make it to the States first.” Toye survived the war and died of cancer age 76 on 03-09-1995 in Reading, Pennsylvania. Guarnere had to have his leg amputated.

for wounds suffered in combat. Guarnere received the Silver Star for combat during the Brecourt Manor Assault on D-Day, and was later decorated with three Bronze Stars making him one of only two Easy Company members (the other being Lynn Davis “Buck” Compton to be awarded the Silver Star throughout the duration of the war while a member of Easy Company. Buck Compton, 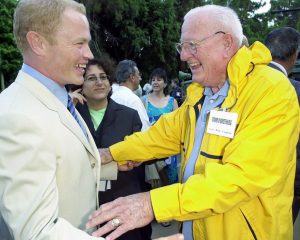 right, in 2001 with the actor Neal McDonough,

who portrayed him in the HBO miniseries “Band of Brothers.” Compton died 25-02-2012, age 90 in his home in Burlington, Washington.

After the war, he got many jobs as a salesman, a clerk, and a carpenter. He eventually married a woman named Frances (Frannie), and had two sons. He wore an artificial leg, before throwing it away after retiring. He and Private Edward “Babe” Heffron wrote a joint memoir, Brothers in Battle, Best of Friends: Two WWII Paratroopers from the Original Band of Brothers Tell Their Story, which described their combat experiences.

“He was the glue that held the Company together,” fellow 101st Airborne sniper Shifty Powers

said. “He would coordinate the reunions, do all the newsletters and send letters to keep the guys in touch and find Company men. He did that from the end of the war until his death.” 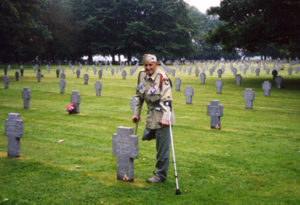 Ultimately, Powers says Guarnere was instrumental in keeping the legacy of the 506th  Easy Company alive.”The heavy lifting that Bill did after the war kept all these men together,” Powers said. Bill Guarnere and Babe Heffron visited Eindhoven many times 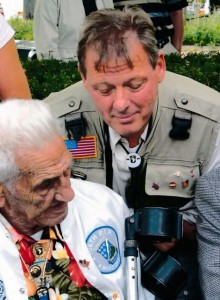 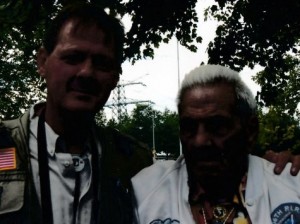 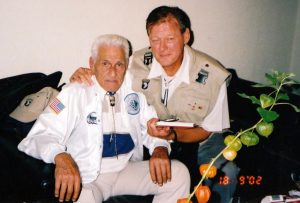 and was talking to everyone interested. Bill was a friendly joking man but also hot-headed. He was very brave by how he returned to the fields of battle early despite injuries and not having to because of the friendships he had made. “Under his tough exterior he had a heart of gold,” Powers said. “He would do anything for anyone. Not only his Veteran friends but he was also great to the general public, as far as autographs, appearances or shaking hands. He was real accommodating to anybody.” 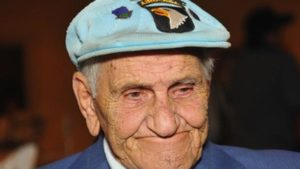 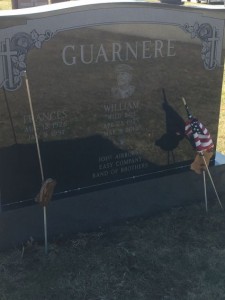 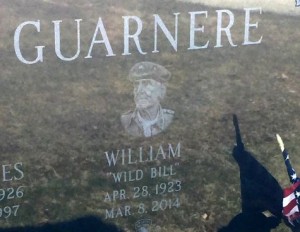 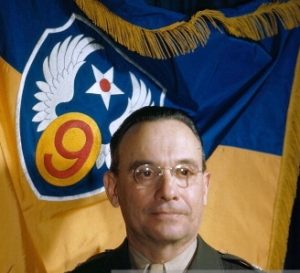 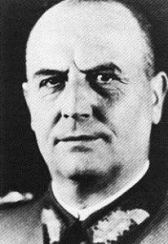 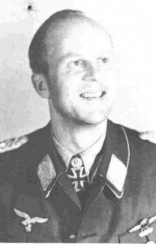