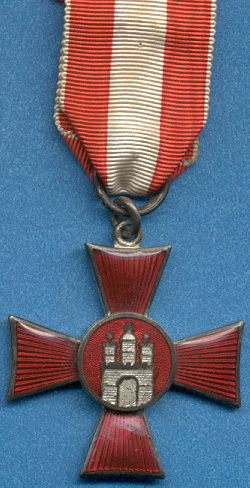 in Karlsruhe. With his regiment he moved as an adjutant in the First World War and took over in January 1915 a balloon anti-aircraft gun train.

On 18-09-1915 he was promoted to leutnant. In May 1916 he resigned his command and was active until 1918 as adjutant in various brigades and divisions. In January and February 1918 he completed a general staff training in the High Command of the Army Group Duke Albrecht of Württemberg.

Before the end of the war on 18-10-1918 his promotion to Hauptmann and as such he was taken to the Reichswehr. At the very end of that conflict, he was promoted to the rank of Oberleutnant.  During the inter-war years, he remained in the German military, the Reichswehr, reaching the rank of Major by the time the Nazi Party came to power. In 1938, as a colonel, Oberst, he was sent to Turkey as a military attaché. Although he was recalled to Germany for the European War, he missed the campaigns in Poland and France. In Mar 1941, he was promoted to the rank of Generalmajor. He landed in the Führer Reserve (see Adolf Hitler) (did you know) in April 1941. At the start of Operation Barbarossa,

Fretter-Pico was given command of the 97th Jäger Division

.  Sigismund von Förster died 12-01-1959, age 71, in Bremen. It fought in the Battle of Kursk and suffered heavy losses. It was then transferred to the lower Dnieper river area and fought well during the retreat through the Ukraine. It was transferred to Slovakia in October 1944 and surrendered to the Red Army

which participated in the Battle of Sevastopol in southern Ukraine. He was known as a by ll,the books General who lacked imagination, thus his commanding officer Generalfeldmarschall, Erich von Manstein did not rely upon him during the battle at Sevastopol.

To prove himself, he launch an offensive at the southern end of the Russian defenses at Sevastopol. Although he made some minor advances, his attack caused too many casualties and it was frowned upon by Manstein as Fretter-Pico engaged his forces in a piecemeal fashion instead of attempting to overwhelm the Russian defenses. Fretter-Pico was promoted to the rank of Generalleutnant

Fretter-Pico retired and died at Bad Wiessee, Bavaria, at the very old age of 92 and is buried with his wife Gertrude, born Soltmann, who died also old age 92 on 26-12-1993, in Berlin, Kreuzberg, Friedhof der Jerusalem Gemeinde.