,joined the Army as a one year volunteer, age 25, with the Grenadier Regiment “Kaiser Wilhelm I” Nr 110

in Mannheim. He was dismissed on 30-09-1908, but with the start of the first war Friedrich Dernen was reactivated in his old Regiment as a platoon leader. Involved  in battles near Mühlhausen and the battle of Lothingen, the first German move during the war. Later battles in Nord France, Bauvin, Vermelles and  Loos and the historic battles of the Somme, Verdun, Aisne and Chemin des Dames

. After the war and the demobilization, Dernen, an Oberleutnant then, was retired and became a business man with the BASF in Ludwigshafen. Reactivated on 19-08-1935 he followed a course as company leader with the Staff of the 26th Infantry Regiment in Flensburg. Assigned in the Reserve as Hauptmann on 01-01-1936 and promoted to Major in the Reserve on 01-08-1936. On 27-08 he became an Oberstleutnant and appointed to the Staff of the 15th Replacement Regiment with the start of World War II. Assigned as commander of the III Battalion of the 88th Infantry Regiment, located at the border with France. On sick leave in hospital on 29-01-1940 and recovered transferred again to the 88th Infantry Replacement Battalion and as their commander on 11-04-1940. Two months later assigned as commander of the 1st Battalion of the 550th Infantry Regiment. From 01-08 until 14-10-1940 he served as trainer with the 159th Infantry Division

and appointed as commander  of the III Battalion of the 36th Infantry Regiment. He lost this command after a new sick leave on 17-01-1942, landed in hospital and referred to the Führer Reserve of the Wehrkreis Command IX. Recovered appointed on 11-05-1942 to commander of the 9th Replacement Battalion and on 27-09-1942 as commander of the 9th Grenadier Replacement Regiment and promoted to Oberst on 01-12-1942. Transferred to the Staff of the 90th Panzer Grenadier Division

under General Leutnant Ernst Günther Baade, here on the left.

. Baade died age 47 on 08-05-1945 strafed by an aircraft. Then Commander of the Fortress Brigade in Sardinien and landed in the Führer Reserve of the OKH

at the same time Military Commander of Belgium and France. From 08-02-1944 commander of the Heeresgruppe, Army Group, South France and following Field Commander 563 and Kampf Commander of Montpellier. Appointed as commander of the 159th Infantry Division from 19-10-1944. He succeeded General der Infanterie Otto Kohl

on sick leave again and landed again in the Führer Reserve

He landed in American captivity in September 1945 and was released in February 1948. Living in Bad Homburg Friedrich Dernen died on his 83rd birthday on 15-02-1967 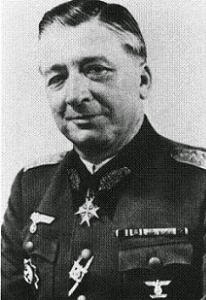 and is buried with his wife Grete, born Friedrich, who died age 89, in 1990 at the Evangelic cemetery of Bad Homburg, Field A 26.