The New York State Guard and was given a commission as a first lieutenant.

, his family’s lineage consisted of Irish, Cherokee and Jewish ancestry. Following his parents’ conversion to Mormonism. Dempsey was baptized into the LDS Church in 1903 following his 8th birthday, the “age of accountability”, according to Mormon doctrine. Because his father had difficulty finding work, the family traveled often and Dempsey dropped out of elementary school to work and left home at the age of 16. Due to his lack of money, he frequently traveled underneath trains and slept in hobo camps.Desperate for money, Dempsey would occasionally visit saloons and challenge for fights, saying “I can’t sing and I can’t dance, but I can lick any SOB,  Non Stop Boxing, in the house.” If anyone accepted the challenge, bets would be made. According to Dempsey’s autobiography, he rarely lost these barroom brawls. For a short time, Dempsey was a part-time bodyguard for Thomas F. Kearns

often fought under the pseudonym, “Kid Blackie”, or “The Manassa Mauler”, though during his stint in the Salt Lake City area, he went by “Young Dempsey”. He first competed as “Jack Dempsey” (by his own recollection) in the fall of 1914, in Cripple Creek, Colorado. His brother, Bernie

, who often fought under the pseudonym, “Jack Dempsey”—this a common practice of the day, in fighters’ admiration of middleweight boxer and former champion, Jack “Nonpareil Dempsey signed to fight veteran Georg Copelin

. Upon learning Copelin had sparred with Jack Johnson, and given Bernie Dempsey was nearing 40 years of age, he strategically decided to back out of the fight. He substituted his brother, still unknown in Eastern Colorado, as “Jack Dempsey”. The fans at ringside immediately knew this was not the man they’d paid to see.

In 1933, Dempsey was approached by Metro Goldwyn Mayer

to portray a boxer in the film, The Prizefighter and the Lady..

In the 1920s and 1930s Dempsey owned and operated the Hotel Barbara on Sixth St in the Westlake area of Los Angeles. The location later became known as the Hotel Barizon and operates today as low income housing.

across from the third Madison Square Garden. The restaurant’s name was later changed to Jack Dempsey’s Broadway Restaurant when it relocated to Times Square on Broadway between 49th and 50th Streets. It remained open until 1974. Dempsey was also a co-owner of the Howard Manor in Palm Springs, California.

here with his manager Jack Kearns

in 1933. Williams was previously married to bandleader Roger Wolfe Kahn . Dempsey and Williams had two children together

and divorced in 1943. Dempsey then married Deanna Piatelli

, remaining married to her until his death in 1983. The couple had one child, a daughter whom they adopted together and would later write a book on Dempsey’s life with Piatelli.

When the United States entered World War II, Dempsey had an opportunity to refute any remaining criticism of his war record of two decades earlier. Dempsey joined the New York State Guard 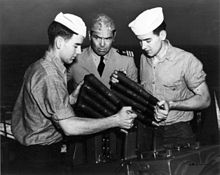 in the Coast Guard Reserve

. Dempsey reported for duty in June 1942 at Coast Guard Training Station, Manhattan Beach, Brooklyn,New York, where he was assigned as “Director of Physical Education.” As part of the ongoing war effort, Dempsey made personal appearances at fights, camps, hospitals and War Bond drives. Dempsey was promoted to lieutenant commander in December 1942 and commander in March 1944. In 1944, Dempsey was assigned to the transport USS Wakefield (AP-21)

In 1945, he was on board the attack transport USS Arthur Middleton (APA-25) for the invasion of Okinawa

Dempsey also spent time aboard the USS General William Mitchell (AP-114), where he spent time showing the crew sparring techniques. Dempsey was released from active duty in September 1945 and received an honora Defense and published in 1950. The book emphasizes knockout power derived from enabling fast motion from one’s heavy bodyweight. Dempsey’s book became and remains the recognized treatise in boxing.

After the world-famous Louis–Schmeling fight

, Dempsey stated he was glad he never had to face Joe Louis in the ring; when Louis eventually fell on hard times financially, Dempsey served as honorary chairman of a relief fund to assist him.

, when he ran for the U.S Senate, from California. One of Dempsey’s best friends was Judge John Sirica

, who presided over the Watergate trials

Dempsey was inducted into the International Boxing Hall of Fame in 1954, and in 1970, became part of the “charter class” in the Utah Sports Hall of Fame.

Dempsey was a Freemason

and member of Kenwood Lodge #800 in Chicago, Illinois

On May 31, 1983, Jack Dempsey died of heart failure at age 87 in New York City. With his wife Deanna at his side, his last words were, “Don’t worry honey, I’m too mean to die.” He is buried in the Southhampton Cemetery in Southhampton, New York. His widow, Deanna Dempsey died in 2003.