one month after Adolf Hitler (did you know)

(see William Hitler),, nicknamed “Tosca”, after his favourite eau de cologne. Demelhuber entered the Army as a volunteer in the first war and became a Leutnant in 1916. After the war he served in the Free Corps, of Franz Ritter von Epp

and was with Hitler’s group in the Bavarian Putz in 1923. He was in the SA “Brownshirts”

SS-Brigadeführer Karl-Maria Demelhuber, announces to headquarters that ‘Nord’ was unfit for combat due to lack of training: the officers had received no more than a short course of lectures and demonstrations of combat tactics; the artillery battalion had fired its guns but once; even the infantrymen had scarcely tried their weapons until their commanding general gave them a little target practice en route to the Russian front. Their rawness was to be a terrible handicap. Demelhuber here with Hanns Rauter

SS commander in Holland,on the right

came to visit him and the Finnish General Hjalmar Siilasvou

.  General in Finnland SS-Armeekorps and XVI. SS-Armeekorps. He was also winner of Deutsches Kreuz in Silber, German Cross in Silver and the prestigious Finnish Vapaudenristin ritarikunta. On 11-06-1942 Demelhuber becomes the Waffen SS commander of the Netherlands,

was commander of the Wehrmacht. SS Obergruppenführer, Hanns Rauter, executed at the age of 54, on 24-03-1949, for his war crimes in Holland, where he already survived an assassination attempt, driving in his staff car near the Woeste Hoeve, a farm near Arnhem, in Holland

. His adjutant Oberleutnant Exner and his driver were deadly hit. As a result, huge reprisals were taken under the command of SS Brigadefuhrer, Dr Karl Eberhard Schöngarth

At Woeste Hoeve itself, 116 resistance men from different prisons were rounded up and shot on the spot and another 147 Gestapo prisoners were executed at a number of other locations. 38 prisoners came with busses from  Den Haag, under them a boy of 15, 6 from Utrecht, 53 from Amsterdam and 49 from Amersfoort. 75 had a family and 157 children lost their father. A German Luftwaffe soldier, Ernst Gräwe

, who refused to take part in the Woeste Hoeve massacre was put in line as well and also shot and buried with the Dutch victims on de Heidenhof, in Ugchelen.

on 20-01-1942, was captured by the Allies at the end of the war. After investigating his background, Schöngarth was also charged with the crime of murdering a downed Allied pilot, on 21-11-1944) and tried by a British Military Court in Burgsteinfurt. He was found guilty of this offence on 11-02-1946 and sentenced to death by hanging. Schöngarth was hanged by Albert Pierrepoint

on 16-05-1946, age 43, at Hameln Prison. Pierrepoint himself died at the old age of 87, on 10-07-1992 in a nursing home where he had lived for the last four years of his life.
Another German condemned was the head of the Security Police in Apeldoorn, Oskar Conrad Gerbig,

who on the scene red out the statement of Commissioner Arthur Seyss Inquart to excuse the execution. He got ten years but was released after 6 months, grace for most war criminals by the new Queen Juliana (see Bernard von Lippe Biestervelt). 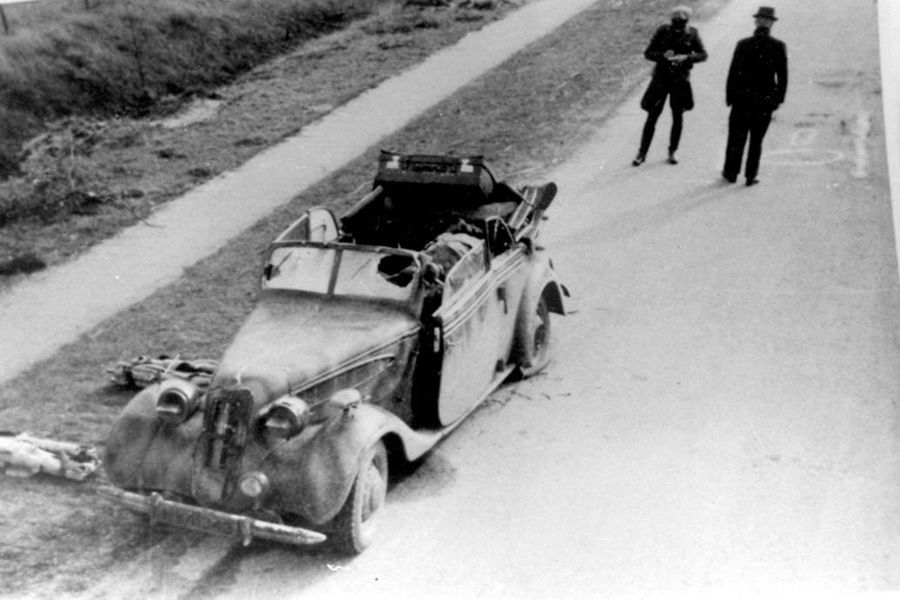 Hanns Rauter a despicable man was Demelshuber’s Chief and he didn’t gave Demelhuber too much influence. Demelhuber was promoted to SS Obergruppenführer

and SS Waffen General, on 21-07-1944 and surrendered his XVI Corps to the British Forces 16-05-1945, in Schleswig-Holstein. Initially held at Rendsburg Prison; transferred to Neuengamme Prison in June 1945 with other Waffen-SS members. On 19-03-1946 transferred to Island Farm Special Camp 11 from LDC, London District Cage, 23-04-1946, transferred to the LDC for investigation into alleged war crimes committed by his unit, SS-Regiment “Germania,” during the 1940 campaign in France. On 07-05-1946, transferred to Island Farm Special Camp 11 from the LDC after having been cleared of charges.
Karl Maria Demelhuber’s son Karl (born 14.11.1923) was in the Waffen-SS (unit and final rank unknown, but photos of him with his father indicate he was an SS-Sturmmann as of 1943).