Marshal and Inspector of Overseas Troops.

the son of Giovanni de Bono, descendant of the Counts of Barlassina, and Elisa Bazzi. He entered the Italian Royal Army

in 1884 as a Second Lieutenant and had worked his way up to General Staff by the start of the Italo-Turkish War of 1911. De Bono would later to go on to fight in World War I, where he distinguished himself against the Austrians in Gorizia in 1916 and Monte Grappa in October 1918. In 1920, he was discharged with the rank of Major General. During the early 1920s, De Bono helped organize the National Fascist Party. In 1922, as one of the four Quadrumvirs, he organized and staged the “March on Rome.”, which resulted in Benito Mussolini’s National Fascist Party (PNF)

This event signalled the start of the Fascist regime in Italy and soon after the birth of the Mussolini government he assumed the office of Director General of Public Security and first commander of the national militia. On 17-06-1924, following the killing of the deputy Giacomo Matteotti

, he left his post as chief of police. Matteotti he was kidnapped and killed by Fascists, age 39 on 10-06-1924. De Bonowas later tried and forced to give up all his assignments but eventually he was acquitted. He was governor of Tripolitania from 1925 to 1928 and Undersecretary of State at the Ministry of the Colonies. In 1929, Mussolini appointed him Minister of the Colonies and in 1935 he was appointed commander of Italian troops in the early stages of the War of Ethiopia. During the war he assumed a cautious tactical and was therefore replaced by Mussolini. Before leave his post, he conquered Axum and Mekele and the same day was appointed Marshal of Italy. He was inspector of the troops overseas in 1939 and then Commander of Armate Sud. He was an opposer of the involvement of Italy in World War II.

and Rodolfo Graziani the “Butcher of Ethiopia”

and is easily identified by his signature beard. Reinhard Heydrich is to be seen, second from left. On 24 and 25-07-1943, De Bono was one of the members of the Fascist Grand Council who voted to oust Benito Mussolini

when Dino Grandi, in collaboration with Pietro Badoglio

and King Victor Emmanuel III, put a no confidence motion to the vote of the Grand Council of Fascism. This led to the dictator’s downfall, arrest, and imprisonment.Later in 1943, Mussolini was rescued during the Gran Sasso raid and returned to power by Nazi Germany. He was set up in northern Italy by the Germans as the “Duce of the Nation” of a new Italian Social Republic. Upon his return to power, Mussolini had De Bono and others who voted against him arrested. He then had Alessandro Pavolini try them for treason at Verona in what became known as the “Verona trial.” 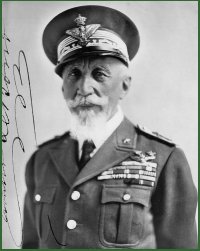 He was shot along with Galeazzo Ciano 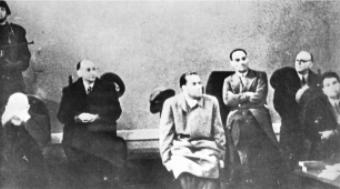 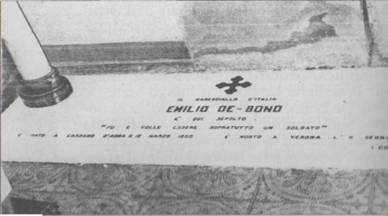