to his father, Martin Van Dager, who was 25 and his mother, Lillian Stead Ely, was 24. He married Eleanora Benetzka on 16-01-1948, in Clark, Nevada. His ambition in life was to practice medicine and particularly to be a surgeon. His family moved to Newark, New Jersey where he attended high school graduating in 1911. He then went to college for the-medical courses and graduated in 1916. During this period from 1910 to 1916 he was a member of the New Jersey National Guard

and attained the position of platoon leader in the Infantry. He was commissioned a Second Lieutenant.In his youth and during his college days he was interested in fishing, hunting, amateur bicycle racing, swimming and boxing. He was an alert young man and his favorite reading was books on world affairs. Dager went into the regular army in 1917 and from March until August of that year he was a student at the Training School in Ft. Leavenworth, Kansas. During this assignment he was promoted to a First Lieutenant. Upon completion of his assignment at the Training School he was assigned to the 51st U. S. Infantry.Early

in 1918 he went overseas with the 51st Infantry and participated in the fighting in the defensive sector of the Vosges Mountains and he also fought in the Meuse-Argonne offensive.

During this period he was promoted to Captain and he was made a company commander and then later he was promoted to Major and he served for a time as a battalion commander.For an unusual fete of bravery during World War I General Dager was awarded the Silver Star Medal.After a short tour of duty with the occupational forces after the war he returned to the United States in 1920 and became a professor of Military Science and Tactics at Clason Military Academy in Bronx, New York.

He remained at the Academy until the end of 1924. In 1925 he became a student at Infantry School in Fort Benning, Ga. and in 1926 he was made Company Commander of Co. “K”, 29th Infantry Division “The Blue and Gray”

at Fort Benning. Still at Benning in 1927 he was made a Regimental Adjutant. In 1928 he once again became a student at Fort Benning taking an Advanced Officers Course at the Infantry School. After completion of the advanced course at the Infantry School in 1929 he was transferred to the Command and General Staff School at Fort Leavenworth, Kansas. He remained at this school as a student until his graduation in 1931.

in 1931 as a battalion commander. The unit was sent to Puerto Rico and Dager remained with the 65th until the end of 1934. Upon his return to the States he was assigned for a short time in 1935 as G-3 in the 1st Infantry Division, nicknamed “The Big Red One “

at Fort Hamilton, N. Y. Once again as a student he was honoured by the assignment to the Army War College in Washington, D. C. late in 1935. Upon graduation he was sent back to Command and General Staff School in Fort Leavenworth, Kansas but this time as an instructor. He remained at this assignment from 1936 to 1940 and attained the rank of Lieutenant Colonel. Early in 1940 General Dager was assigned to Fort Wadsworth on Staten Island in Hew York where he was Post Commander. Later that year he was assigned as Assistant G-3 in Headquarters of the First Army stationed at Governors Island, New York. During this assignment he wrote the Carolina and Louisiana manoeuvre problems.

As war clouds gathered again Dager was transferred in 1941 to the 41st Armoured Infantry Regiment of the Second Armoured Division which was in training at Fort Benning, Georgia. Holmes Dager was assigned as Regimental Commander and during this period he was promoted to Colonel. In September of 1941 Dager was made a Brigadier General and he was made Commanding General of CCB of the 8th Armoured Division, nicknamed “ Iron Snake”

then stationed at Fort Knox, Kentucky. Early in 1942 General Dager was assigned to the 4th Armoured Division as Commanding General of CCB and joined them at Pine Camp, New York. He trained with the Division in Tennessee desert manoeuvres and at Camp Bowie, Texas. He went overseas with the 4th Armored, nicknamed “ Patton’s Vanquard”

and he was with them from Omaha Beach to the Rhine. Casualty figures for the 4th Armored Division, European theater of operations: total battle casualties: 6.212 and  total deaths in battle: 1.366.He led CCB of the 4th in the famous 65 mile “rat-race” to the Rhine in 58 hours. There General George Smith Patton

came up and spit (?) in the Rhine remarking, “Dager, I’ve been waiting three long years to spit (?) in this creek!” This job was one of many famous “crash-drives” for which the 4th and 11th Armoured Divisions, nickname “Thunderbolt”

became famous.In March of 1945 at Mayen, Germany Dager was promoted to Major General and assumed command of the 11th Armoured Division, where he succeeded Lieutenant, General, Edward “Ted” Brooks.

Casualty figures for the 11th Armored Division, European theater of operations: total battle casualties: 2.877 and total deaths in battle: 524. The United States Army suffered 318.274 killed and missing in all theatres of the war.  He remained with the Division until September of 1945. Dager commanded the 11th from the Rhine to Linz, Austria and the meeting with the Russian 7th Paratroop Guards Division

. This was a 150 mile drive through varying hard and light opposition but made with an average of 15 miles a day.

On reaching Linz, the nearest troops to the 11th Armoured were miles behind and nothing on either flank. Even the nurses were with us all the way. Our determined armour “paid the rent” and pulled the infantry along. It was the farthest east unit of all American troops when the war ended and it was itching to go further.In 1947, he retired from active service as Commanding General of the US Forces, Austria. Major General Holmes E. Dager: Sir, you will be remembered as a man who indeed privileged and had the most unusual experience of leading troops in two famous hard-hitting armored divisions in the Third Army during World War II. General Patton laid his most heavy and difficult assignments on the 4th and 11th Armored Divisions. They never failed him, laid their name, reputation and prestige on the line and they paid willingly and heavily in the lives and wounds of the material of which fighting units are built–alert, highly-trained and physically fit officers and men with plenty of guts, remembering you 40 years later, may you rest in peace! General Holmes Dager died age 80,  on 24-07-1973 and is buried on Arlington National Cemetery, in Section 4. In Section 4 also buried,  3* Lieutenant General, Chief of Staff, 1 Army, William Benjamin Jr. Kean

and  4* Navy Admiral, Civil Engineer Corps. Father of the “Seabees” 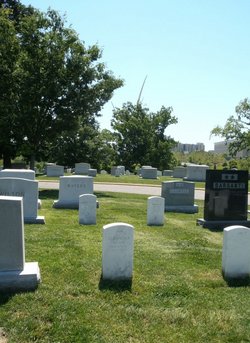 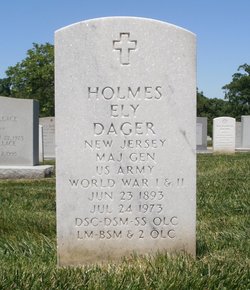