became the youngest “soldier” to receive the Iron Cross. According to various sources, the youngest Recipient of the “Iron Cross 2nd Class” of the Third Reich,

was the 12 year old Alfred Czech. Alfred Czech was then in the Jungvolk, a movement set up in 1936 for the offspring of Nazi party members who were too young to join the  movement

The Jungvolk’s members were aged 10 to 14. Thousands of them were pitched into battle against the invading Red Army in early 1945, and thousands died.

The last days of the Reich were some of the most gruesome, nowhere to hide, nowhere to run, encircled by various forces and not sure if you will come out alive but some young boys stepped up and showed true heroism although knowing that everything else was lost.

It was 20 March 1945, not Hitler’s birthday on 20 April 1945 as many claim, when Alfred Czech with 19 other comrades, all selected by their Hitler Reichs Youth leader Arthur Axmann,

were personally greeted in the garden of the Reichskanzlei by Adolf Hitler and congratulated to the awarding of the Iron Cross 2nd Class.

Alfred earned the cross a day earlier when he, near his hometown of Goldenau, whilst being under artillery and machine gun fire helped 12 wounded German soldiers, who he brought into safety and delivered a Soviet Spy to the Police. At the same time he was awarded with a watch as he was responsibly for the capture of this hostile spy earlier. The excited boy noticed that a “Obergefreiter” who was making photo’s in his hometown wore his division rang on the right and also wrong arm. He followed the suspect until he was captured by a policeman and was removed.

A German General appeared at the Czechs’ family farm. He told the parents to get their son ready for a trip to Berlin. He would be awarded with the Iron Cross 2nd Class

, by Adolf Hitler himself.

“My mother was dead against the idea,” he said. “She was afraid I might come to harm on the journey, but my father was in favour so I went.” The boy from the country was put on a military plane to Berlin. He arrived in a city in which the ground shook because of the constant Russian heavy artillery bombardment 20 miles to the east. The British Army was close to Hamburg and the Americans had reached the river Elbe. But some Nazi diehards had raised red, black and white swastika flags to “celebrate” Hitler’s birthday. 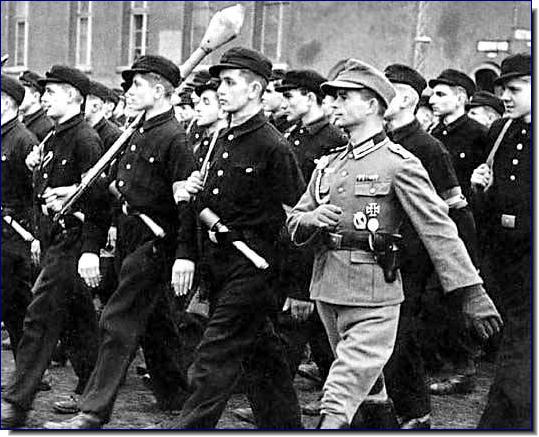 After touchdown, the young Alfred was introduced to other Jungvolk children and teenagers who had performed acts of bravery in the belief that a final victory for Germany was only weeks away. The boys were given a shower and a hearty breakfast then ordered to put on new uniforms. Inside the Reich Chancellory garden, they formed a line and waited for Hitler. They were told by Arthur Axmann

that when the Führer arrived they should neither stand rigidly to attention nor greet him with the Nazi salute. A posse of cameramen and a propaganda team from the German Wochenschau newsreel unit got their equipment ready.

Adolf Hitler (did you know)

appeared, the newsreel shows him with his collar uncharacteristically turned up, his moustache already grey and his, by then, uncontrollably twitching left arm, held fast against his back. Hitler was too infirm to pin the Iron Crosses on the boys’ tunics himself. The job had to be done by Axmann. When Hitler shuffled along the line of boys and reached Alfred, he asked him: “So you are the youngest of all? Weren’t you afraid when you rescued the soldiers?”. Mr Czech remembers saying only: “No, my Führer!”

Alfred Czech was mentioned in this Wochenschau, the weekly German war news on 22-03-1945. He vividly remembers those moments, 60 years ago, when he met Hitler for the first and only time. “I was only 12, but the Führer shook my hand, then he pinched my left cheek. He told me, ‘Keep it up!’,” Alfred Czech said. ” I certainly had the feeling that I had done something remarkable.”

After the ceremony he had secretly wanted to go home, but the young Alfred could not go home. By that time, Goldenau had already been taken by the Soviet troops. He was left with no option but to follow orders and go to Freudenthal in German-annexed Sudetenland to fight on in what is now the Czech Republic.

“All the regular soldiers had to salute me because of my Iron Cross,” he said. But many of the battle-worn and utterly dispirited soldiers of the regular Wehrmacht he encountered simply told him to go home. But Hitler’s youngest hero stayed on. Back on the front Alfred was wounded by a lung shot and landed in Allied capture. He suffered from the effects of the wound all his life. Before he was captured an Oberleutnant advised him to get rid of his Iron Cross and uniform and so he did. After the war he bought a second hand Iron Cross at a rumble sale and this was hanging in his living room since.

He managed to survive the rigours of a prisoner-of-war camp in what was then Czechoslovakia. Only in 1947 was he released and allowed to return home. The ill-fed 14-year-old boy walked all the way from Prague to his parent’s farm-house in Goldenau which by then had become part of Poland. When he got home, he learnt that his father was missing. In a fanatical, last-ditch attempt to hold back the Red Army’s advance, the Nazi leadership had pitched not only boys like Alfred Czech into battle, but also seasoned First World War veterans to form a last line of resistance. Alfred Czech’s  handicapped father was among them. In the last days of the war, he was forced to join Martin Bormann‘s

the People’s Storm defence force, the equivalent of Britain’s Home Guard, and thrown into battle against seasoned Soviet troops. Three months after the end of the war, his father’s body was found with a bullet hole in the neck.

Yet Alfred Czech felt that he had little choice but to stay on in the Polish Communist country. He became a miner, married and sent countless applications to the authorities seeking permission to emigrate to West Germany.

After 13 refuses to move to West Germany, he at last in 1961 was allowed to immigrate to the Bundes Republic Germany, BRD and worked their as a carpenter in Hückelhoven-Kleingladbach . Retired in 1982, he and his wife Gertrud, who he married in 1951, had 10 children and 20 grandchildren.

Czech was interviewed by the newspaper the Stern in 2006 and admitted that the photo of the Iron Cross papers signed by Adolf Hitler were  still hanging in his living room. Alfred Czech died at the age of 78 on 13-07-2011 and is buried with his wife Gertrud, who died age 74 on 18-01-2007 on the local small cemetery of Kleingladbach.