united statesArmyGeneralleutnant
Canine, Ralph Julian, born on 09-11-1895 in Flora, Indiana, entered World War I as an Army second lieutenant. He knew immediately that the Army would be his life and never had a second thought about a medical career. He served in various combat posts in France and elected to stay in the Army after the armistice was signed in 1918. When World War II broke out, Canine became the Chief of Staff for the XII Corps, which served in George Smith Patton‘s 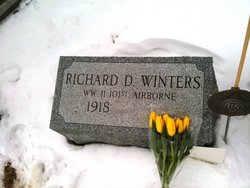 . The Battle of the Bulge involved about 610.000 American men, of whom some 89.000 were casualties, including 19.000 killed. It was the largest and bloodiest battle fought by the United States in World War II. During World War II, most U.S. black soldiers still served only as truck drivers and as stevedores, except for some separate tank, tank destroyer, and artillery battalions as well as in Army Air Force

fighter units. In the midst of the Battle of the Bulge, General Dwight “Ike” Eisenhower was severely short of replacement troops for existing military units which were totally white in composition. Consequently, he made the decision to allow African American soldiers to pick up a weapon and join the white military units to fight in combat for the first time. More than 2.000 black soldiers had volunteered to go to the front. This was an important step toward a desegregated United States military. A total of 708 African Americans were killed in combat during World War II.  For their efforts during World War II, the 101st Airborne Division “The Screaming Eagles”

was awarded four campaign streamers and two Presidential Unit Citations. The division suffered 1.766 killed in action; 6.388 wounded in action; and 324 died of wounds during World War II. After the war Canine was rewarded with command of the First Infantry Division, nickname “The Big Red One”

, one of the most prestigious of Army jobs. Casualties during the European campaign, 4.411 killed in action, 7.201 wounded in action, 1.056 missing or died of wounds. By the end of the war, the division had suffered 22.668 casualties and boasted five Medal of Honor recipients. Lieutenant General Ralph J. Canine, NSA’s first director, is known today as the Great Unifier – the man who, almost single-handedly, forced crypto logic unification on the Services. His term at NSA, from 1952 to 1956, became the crucible for crypto logic centralization. He departed the Army and NSA a figure of mythic stature. Had Canine not been the director, NSA might not have survived the end of the decade.

After an illness of varying severity of several weeks, during which time he was able on occasions to be about the city, Ralph Julian Canine died suddenly at the age of 74, on 08-03-1969 at 7:43 o’clock, at 118 West Seventy-sixth Street. The immediate cause of death was an effusion of blood and foreign matter into the lungs, causing suffocation. Canine is buried with his wife Ruth, born Wiscomb, who died very old age 90 on 08-01-1988, on Arlington National Cemetery, Section 12.