united statesArmyGeneralmajor
Boudinot, Truman Everett, born 02-09-1895 in Hamilton, Iowa, saw service on the Mexican border in Texas with the 8th Cavalry during World War I. In March of 1942 he took command of the 32rd Armoured Regiment, 3rd Armoured Division. He commanded the regiment until July 15, 1944, when he assumed command of Combat Command B, 3rd Armoured Division. The Third Armored Division, nicknamed the Third Herd, was organized as a “heavy” armored division, as was its counterpart, the Second Armored Division also called “Hell on Wheels”.

He commanded CCB for the duration of the war and commanded the division during June and July of 1945.  He later assumed command of the 7th Armored Division, nickname “Lucky Seventh”

1.366 men were killed during their campaign in Europe, and commanded it until it inactivated in October of 1945. During its service during World War II, the division captured and destroyed a disproportionate number of enemy vehicles and took more than 100.000 prisoners. The 7th Division was activated on 01-03-1942, reorganized on 20-09-1943 and arrived in the United Kingdom in June 1944. The 7th was preparing to drive into Germany when the Ardennes offensive began on 16-12-1944, Battle of the Bulge.

(see Otto Funk). The Battle of the Bulge involved about 610.000 American men, of whom some 89.000 were casualties, including 19.000 killed. It was the largest and bloodiest battle fought by the United States in World War II. During World War II, most U.S. black soldiers still served only as truck drivers

and as stevedores (except for some separate tank, tank destroyer, and artillery battalions as well as in Army Air Force fighter units). In the midst of the Battle of the Bulge, General Eisenhower was severely short of replacement troops for existing military units which were totally white in composition. Consequently, he made the decision to allow African American soldiers to pick up a weapon and join the white military units to fight in combat for the first time. More than 2.000 black soldiers had volunteered to go to the front. This was an important step toward a desegregated United States military. A total of 708 African Americans were killed in combat during World War II. The Division was transferred to US First Army

under Courtney Hicks Hodges and ordered to St. Vith, Belgium. Like Combat Command “A”, the story of CC “B” is the history of the 3rd Armored Division, nickname “Spearhead” 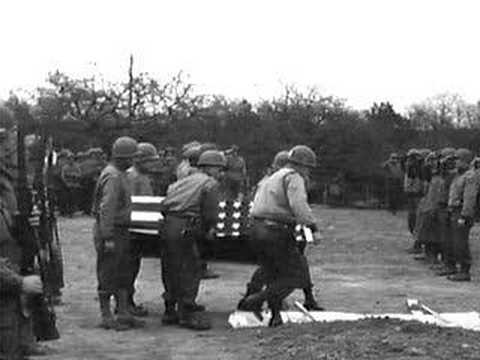 famed as one of few commanding Generals to frequent the front lines during combat, was shot twice in the head on 31-03-1945 in an ambush, near Heidelberg.

General Boudinot was retired in December of 1945. His military decorations include the Silver Star with 3 oak leaf clusters, the Legion of Merit, the Bronze Star Medal, the Air Medal, the French Legion of Honour and the Croix de Guerre. General Boudinot died shortly after the end of the war at the age of 50, on 11-12-1945. He is buried with his wife Lolita, born Sargent, who died age 80 in 1975, on Arlington Cemetery in Section 3. Close by in Section 3 the graves of the Major General, Commander, G1 (Personnel) Section, Headquarters SHAEF, Charles Bonesteel, 101st Airborne General, Anthony McAuliffe