Felsberg-Altenburg. On family country seat in the woods.

and his wife Josephine, born Hoyer Bolling (1884–1987), was a student at the U.S. Naval Academy at Annapolis from 1915 to 1916, but he left the USNA and enlisted in the U.S. Army. He was sent to France during WWI, where he earned a battlefield commission. After WWI, he was sent to Fort Bliss, Texas where he chased Mexican Bandit, Pancho Villa died age 45, in Parrel, Mexico,

He was promoted to the rank of Captain, which he held for 12 years. While in command of a company of the 4th Infantry, 3rd Division, in the Boise-des-Nesles, on the night of 14-07-1918, Second Lieutenant Bolling earned the Distinguished Service Cross by “continually exposing himself to heavy gas and shell fire by going from one platoon to another.” Bolling commanded the 84th Infantry Division, nicknamed “Railsplitters”

in the European Theater of Operations during World War II. Casualty figures for the 84th Infantry Division,  in 170 days of combat on European theater of operations total battle casualties: 7.260 total deaths in battle: 1.468.

After the war, Bolling was promoted to Lieutenant General in 1952 and assumed command of the Third U.S. Army

Upon his retirement in 1955, he made his home in Satellite Beach, Florida. Lieutenant General Bolling died on 03-06-1964, age 68, and is buried with his wife Josepine, born Hoyer, who died very old age 93 on 23-08-1987, on Arlington National Cemetery, Section 3, Grave 1393 B. Bolling was the father of Major General Alexander R. “Bud” Bolling, Jr., the father-in-law of Major General Roderick “Rick” Wetherill 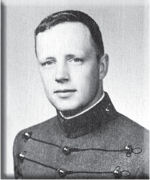