and a member of the SD. He was a German soldier who fought in World War I, decorated with the Iron Cross first class

. After the war, Blobel studied architecture. He then joined the Nazi Party and the SS

on 01-12-1931. During the German invasion of the Russia, Blobel was the commanding officer of Sonderkommando 4a of Einsatzgruppe C

operating in the Ukraine. Following Wehrmacht troops into the Ukraine, the Einsatzgruppen, mobile killing units, would be responsible for “liquidating” political and racial undesirables. Blobel was primarily responsible for carrying out the infamous massacre of 33.771 Kiev Jews at Babi Yar in Kiev.

protested his absence from Kiev and declared further that only fifteen of his fifty-three men could be detailed for the executions. Returning to Chelmno, after his appointment Blobel, along with a small staff of three or four men, began experimenting with systems for burning bodies. The place chosen for these experiments was Chelmno, the first death camp that had been established and had been operating since the end of 1941. On 22-08-1941 the Sonderkommando murdered Jewish women and children at Bila Tserkva with the consent of Field Marshal Walther von Reichenau,

The Wehrmacht had already dug a grave. The children were brought along in a tractor. The Ukrainians were standing around trembling. The children were taken down from the tractor. They were lined up along the top of the grave and shot so that they fell into it. The Ukrainians did not aim at any particular part of the body….The wailing was indescribable

From July 1942 until 1944, Blobel was put in charge of Aktion 1005, the operation to obliterate the traces of the mass murders committed by the Germans by disinterring and cremating the bodies from the mass graves in the German-occupied Soviet Union. This was carried out by exhuming the bodies from mass graves and burning them, a task that Blobel optimized with techniques he had developed, alternating layers of bodies with firewood or the use of rails as grills. One of his pronounces is, I would not say that they were happy. The victims knew what was going to happen to them. Of course, they were told what was going to happen to them and they were resigned to their fate and that is the strange thing about these people in the East. He told that during his visit  in August He himself observed the burrning of the bodiesin a mass grave near Kiev. This grave was about 55 m long, 3m wide and 2-1/2 m deep. After the top had been removed the bodies were covered  with inflammable material and ignited. It took about two days until the grave burned down to the bottom. He himself observed that the fire had glowed down to the bottom. After that the grave was filled in and the traces practically obliterated. Reich Security Officer Albert Hartl

he died after a happy life, age 78 on 14-12-182 in Ludwigsburg, told of a summer evening—that same hot summer in 1942—in Kiev when he was invited to dine with the local Higher SS Police Chief and SS Brigadeführer, Dr. Max Gareon Alexander Thomas

Thomas died age 54 on 06-12-1945. Thomas made an attempt  for suicide and died of the result of this attempt in the Würzburger Luitpold hospital. .A fellow guest, SS Oberstleutnant Paul Blobel, had driven him to the general’s weekend dacha. ‘At one moment—it was just getting dark,’ said Hartl, ‘we were driving past a long ravine. I noticed strange movements of the earth. Clumps of earth rose into the air as if by their own propulsion—and there was smoke; it was like a low-toned volcano; as if there was burning lava just beneath the earth. Blobel laughed, made a gesture with his arm pointing back along the road and ahead, all along the ravine—the ravine of Babi Yar—and said, ‘Here lie my thirty-thousand Jews. Up to 59.018 killings are attributable this awful Blobel, though during testimony he was alleged to have killed 10.000–15.000.

Paul Blobel was later sentenced to death by the U.S. Nuremberg Military Tribunal in the Einsatzgruppen Trial 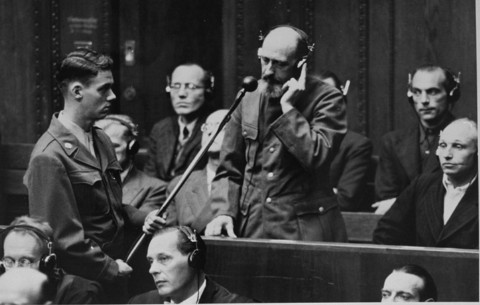 SS Hauptscharfführer, head of the Crematoria of Auschwitz, Otto Moll,

the organiser of the Euthanasia Programme, Action T4, Victor Brack,

and Leader of the Reichsforschungsamt, Wolfram Sievers.

All the bronze plates are removed from the crosses now, as the population of Landsberg protested against the mixed graveyard with murders and their victims.