attended Virginia Poly Institute, to Lieutenant Frank and Felicia T. Camm. His father was an artilleryman in the U.S. Army. He also had two brothers (William and John) and a sister (Felicia).  and received an L.L.B. Degree

, Fort Bragg, 1943, XIII Corps Artillery, Camp Picket, Virginia, 1943; the 78th Division Artillery, U.S., England, France, Belgium, and Germany, 1943-46. He participated in the Ardennes battles (Battle of the Bulge), and the capture of the Remagen Bridge

who became a Lieutenant General is buried in the same section as his father and mother. Frank Jr a combat engineer in the 78th Infantry Division under Major General

Edwin Pearson Jr Parker during the war, was involved in the conquest of the Remagen bridge, one of the big events during the war. General Parker died old age 89 on 07-06-1983 in Washington, District Columbia. 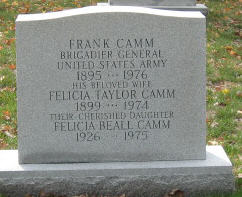