were set to jump. Unlike the Normandy jumps, this operation, by order of Lieutenant General Lewis Brereton

was to be carried out in daylight. Shortages in transport planes, however, prevented the three divisions from dropping all their troops on D-Day, and the commanders had to decide which units would go in first. The 101st Airborne Division was to anchor the British Airborne Corps’ southern-most flank and secure a 15-mile sector between Eindhoven and Veghel. Taking this into consideration, General Maxwell Taylor

decided that the three parachute infantry regiments would jump on the 17 September. The 327th Glider Infantry

was to arrive on D+1, and the artillery units were scheduled for D+2, the 19th.

The planes carrying the 101st encountered heavy antiaircraft fire as they approached their targets, but the pilots were able to hold formation, and the paratroopers, for the most part, were delivered to the correct drop zones. These were located to the west of the main highway and in the center of the division’s sector, near the villages of Zon, St. Oedenrode, and Best. The 506th Parachute Infantry dropped near Zon, with the mission of securing the highway bridge over the Wilhelmina Canal, south of the village. 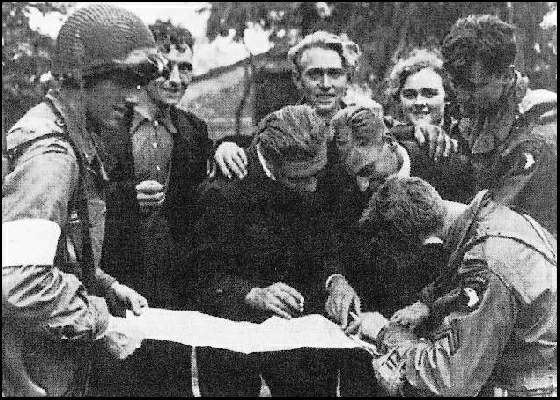 Once the bridge was secure the regiment was to advance further south and seize my hometown Eindhoven. The 502d’s zone was north of the 506th, and its mission was to guard both regiments’ drop zones for later use by the gliders. It was also to capture the road bridge over the Dommel River at St. Oedenrode. Additionally, General Taylor ordered the regiment to dispatch a company to the south of Best to capture the bridges there that crossed the Wilhelmina Canal. The 501st Parachute Infantry

jumped north of the 502d, near the town of Veghel. Elements of the regiment were to gain control of the rail and road bridges over the Willems Canal and the Aa River.

and the surrounding bridges against only limited enemy resistance. The 502nd

also completed its main assignment of securing St. Oedenrode and the bridge over the Dommel River. The company that had moved south of Best, however, had great difficulty and could not take the bridges over the Wilhelmina Canal. The 2nd and 3rd Battalions, 506th PIR,

methodically cleared Son, while the 1st Battalion, accompanied by General Maxwell Taylor, moved around the village to the south to seize the bridge crossing the Wilhelmina Canal. 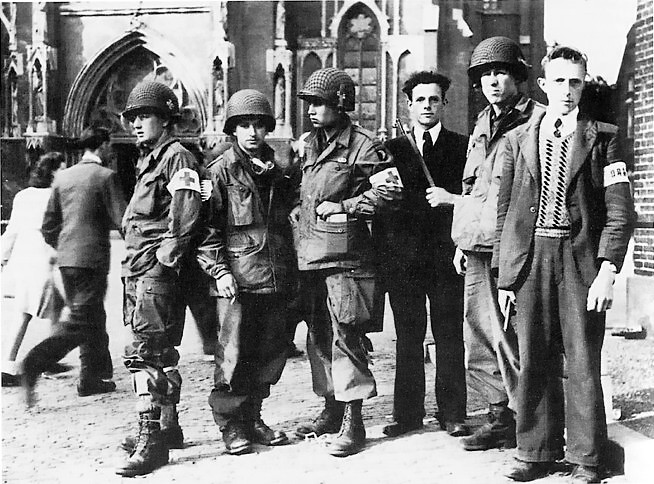 Elements of the 506th managed to cross the river, neutralizing the enemy force that had destroyed the bridge, and a footbridge was improvised to allow the remainder of the 506th to cross. The following day the regiment liberated Eindhoven, clearing the enemy from the town .

The local citizens were ecstatic, and that evening when the Guards Armoured Division, the spearhead of the British 30 Corps’

under command of  Lieutenant-General Brian Horrocks

, Operation GARDEN, passed through the town, it was like a carnival. British engineers replaced the blown bridge over the canal, and the ground forces continued north. With the exception of the bridges south of Best, the division had achieved all its D-Day objectives. The next mission was to hold what it had taken and keep Hell’s Highway. Eindhoven was liberated at last.

the Canadian leader of The Commodores Orchestra in Canada sent me a message about his father Phil Sparling.

followed the Canadian Army on close distant and played in almost every liberated town.This was still a dangerous life as for example, in the book, he described how they stayed at an infirmary or a small hospital beside an airfield at Eindhoven in December 1944. The were awakened by German Messerchmitts strafing and bombing the airfield, destroying 50 Allied aircraft on the ground. There were casualties. My father and his bandmates were moved from a barracks to stay in the infirmary for the night. The barracks was destroyed.

That same week, the band crossed over the Grave bridge

near Nijmegen under enemy fire, to play for troops in a church about 400 meters from the front lines. In all the band played about ten times for troops in an around Eindhoven between Dec. 18 and Dec. 31, 1944.

The Canadians were very popular in Holland and after the liberation, an estimated 4,000 to 9,000 so-called “liberation children” were born, of which about 6,000 were from Canadian soldiers.

More than 1,800 Dutch women left for Canada with their Canadian husbands, as so-called “war brides”. A famous Dutch song remained “Trees has a Canadees”

Thanks to all Canadians.

Arthur Liebenhenschel, commander of Auschwitz concentration camp.
Did You Know 4.