Gesche joined the Nazi party in 1922 when he was only 17 and first met Hitler in Berlin a short time afterwards. The Führer remained devoted to him for the remainder of his life, despite the fact that Gesche had a heavy drinking problem. Gesche was known as a ruthless brawler and intimidating to Nazi opponents.

Himmler intrigued against Gesche and sent him to the Russian front in 1942. Incredibly, Hitler intervened and summoned Gesche back to his side. But when Bruno fell off the wagon with a thud, Himmler dumped him to Italy and Gesche surrendered to the Americans in 1945. Gesche here with Hitler and his driver Erich Kempka on the left

He agreed only to discuss Hitler as a private man and incidents relating to Hitler personally. Gesche refers to Hitler as der Chef (the boss). All of Hitler’s inner circle called him by this name.

The boss liked music and art. I never cared about either of those things so we didn’t talk about it. What he and I talked about were engines, car engines. He knew everything about cars, engines, performance. He was a car nut like me so we talked about that mostly.

I practically never drove his car, the main car had the driver, Hitler in the companion seat and Julius Schaub,

and another adjutant in the seats. Wilhelm Brückner

was there and (Sepp) Dietrich

was a regular too. Heinrich Hoffmann,

his photographer, me and a few others drove in the second vehicle. That was better for security. Security was the issue in the Kampfzeit (period of struggle). Communists were always threatening us, issuing death threats to Hitler, so it wasn’t sunshine and roses. We were always on guard for attacks.

Were these older women fond of Hitler? They must have been.

Fond? No, they were all in love with him and they didn’t look upon him as a son. They were all nuts over the boss and he wasn’t stupid enough to turn his back on serious, serious money. It was meant for him personally not the Party. These women didn’t give a damn about the party, it was Hitler they were after. None of them were National Socialists even if they were members of the Party. The Boss was charming, I don’t care what’s said now, I knew him and saw the charm. He was even charming with men, but with women he poured it on thick like glue. Real thick and these old rich ladies ate that all up like a cow herd coming to a salt lick. I got so sick of seeing this I would just leave when he visited these women.

You believe Hitler actually had a sexual relationship with Frau Bechstein? 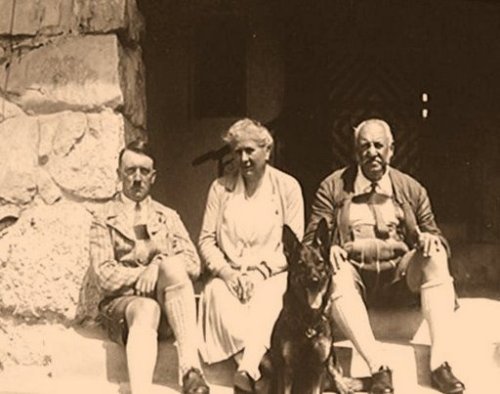 BG: You asked me, I answered. She was in love with him and was just loaded. Have you ever seen how much a Bechstein piano costs? They cost a fortune. If Hitler had to service her once in awhile to keep the cash flowing, why not? He wasn’t above that in the early times.

BG: That isn’t it, you see. Like him? Yes, but he was my leader, my boss, he was the light for the future. I make no apologies then or now and never will. I revered him, I would have given my life for him in a moment. Everyone around him felt the same. He inspired devotion. As a man, we had little in common but I admired his intelligence, strength of character and of course, the way he spoke. No public speaker who ever lived could best him. He was spellbinding. He was like a Messiah.

Did you know Maria Reiter?

BG: I wouldn’t say I knew her. I spoke to her a few times. I saw her in Munich with Hitler in a few places. He’d take her to out of the way places, not his usual haunts, but he never spoke about her except in later years. If we were at a Gasthof or Inn and a beauty walked by, Hitler would say, “she looks like my Mimi.” Or he called her Mizzerl in his Austrian way. Oh God, she was a beauty. I never saw her again after the Boss got control of things, after he was Führer. But even in the late 30’s, he would call her “my Mimi,” even though I doubt he’d seen her in years by that time.

What can you tell me about Geli Raubal,

the much-loved niece? Did you know her?

Sure, she was always around Hitler for several years before she killed herself. He even let her travel with us when we were on the road, though not in the main colonnade. She went once to Bayreuth and once up north but she wasn’t a pleasant lady. I don’t even think Geli was that fond of her. She was grouchy. I don’t know why the Boss had her around for as long as he did even if they were related . As for Geli, she was not blonde like books say now. It’s so ridiculous, she had very dark hair, almost black. She was not the ideal Aryan type that Hitler usually ran after. Geli was what I’d call, what’s the words? I think manic depressive; up and down. Hitler had that tendency too but Geli didn’t have his explosive temper, she would stew. But she wanted what she wanted and was spoiled rotten by the boss. She and Emil Maurice

were close, how close, I don’t know. I knew him well, he had the tendency to exaggerate his affairs. He had plenty, but whether he had Geli, I don’t know.

BG: Yes, that sounds right, I do know Geli died in the summer of 1931, some big dates like that stick in my brain. Hitler noticed Eva early on, he liked to drop in to see her. He called her mein Schatzerl, which indicated he was attracted, he liked what he saw. Who wouldn’t? All of us liked looking at her, she had two legs which I really liked looking at. Her legs were dynamite. Even an old man has his memories.

Kempka told me she was the “loneliest woman in Germany.”

BG: She saw Hitler often enough, though maybe not in the war years. He spent a lot of time away from Berlin and he was with her then. Little Eva had to accept he was not an ordinary man, she knew this. Hell, she had an enviable life to most women. He was the big prize and she had him. You don’t think that was some consolation and he married her. That says plenty right there.

Visit by Adolf Hitler, June 1940 to his old battlefields.