Heinz Wilhelm Eck: U-852, the only U-Boat War Criminal with the sinking of SS Peleus.

Throughout the entire Second World War, the Kriegsmarine had only one U-boat commander convicted of war crimes. Kapitän Leutnant Heinz Wilhelm Eck

was indicted and sentenced to death by firing squad at the Nuremberg Tribunal on November 30 1945.

Heinz-Wilhelm Eck was born in Hamburg on March 27 1916, and was raised in Berlin. He joined the Kriegsmarine in April 1943 as part of Crew 34. After completing his training in 1937 he spent five years on minesweepers, commanding one from 1939.

In 1942 he volunteered for the U-boat force and was accepted for training at Pillau on 8 June 1942. His commander-in-training patrol was aboard the famous U-124, commanded by his classmate Johann Mohr,

and put the boat through months of training before leaving from Kiel for the Indian Ocean.

Two other officers of U-852, the 2WO and the doctor were also indicted and shot. Additionally, the Leading Engineer and a seaman were complicated in the incident. They both received a reduced sentence of prison terms. The defense presented that the LI had objected to the actions of his CO and the seaman was simply following orders.

The story of the incident really began on a summer day of March 13, 1944. U-852 was enroute to the Indian Ocean to join the Monsoon wolf pack operating there. During the journey, Eck torpedoed and sank the Greek tramp steamer, SS Peleus 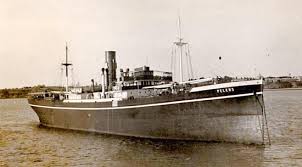 . Amid the sinking wreckage were the survivors jammed packed in lifeboats and rafts. Fearing that the survivors of his torpedo attack would be rescued and give away his presence, Eck ordered for all the survivors to be machine gunned.

In protest, his Leading Engineer questioned his commander’s order but could do little to change the fate of the survivors. Standing atop the bridge of the U-boat, the crew of the U-852 meticulously hunted and machine gunned the survivors. Hand grenades were also hurled at the remaining lifeboats

As it turned out, not all the survivors were killed. One survivor managed to escape and was eventually rescued by allied ships. He had lived to tell the story which had led to the indictment of the four U-boat officers and a seaman.

The U-852 was itself sunk on May 3 1944 by British aircraft off the coast of Somalia. The crew was interned and sent to POW camps, after which they were charged when the war ended.

The hearing was known as the Peleus Trial. The prosecutor was Colonel Halse of the Advocate General’s Office.The presiding judge was Major A. Melford Stevenson.Those charged were Heinz Eck, age 29, August Hoffmann

was released already after 8 months and Wolfgang Schwender

condemned to 15 years was released after 6 years in prison.